The people of Wales feel more strongly Welsh than they did in 2016, and Brexit is likely to be the reason, a top academic professor has said.

Professor Richard Wyn Jones who is the Director of Cardiff University’s Wales Governance, pointed to polls showing that the percentage of people who defined themselves as Welsh in Wales had risen from 24% to 30%.

Meanwhile, the number we defined themselves as British and Welsh had fallen from 27% to 19%.

Writing in the Welsh language Barn magazine, Richard Wyn Jones postulated that as Brexit was defined as a national British project, those who were opposed to Brexit were increasingly defining themselves according to alternative national identities.

“My theory is that it is Brexit that explains this fall,” he said.

“Over the past five years, it has become clear that Brexit is a national project in that it is an effort to embed and advance a particular understanding of a nation’s past as well as a possible future.

“But of course, it’s an understanding that both divides and polarizing understanding, with many rejecting it outright. In such a context, is there not likely to be a tendency among those who reject also reject the national project and the national identities most closely associated with that project?

“After all, in the context of the complex patterns of identity that exist in the UK, we all have options! And indeed, on closer scrutiny of the latest data, it seems that the supporters of Remain – the Remoaners, as the tabloid press call them – are those who abandon their dual identities and embrace a sense of national identity that better links with their political aspirations.

“One of the consequences of Brexit, therefore, is to make the Welsh Welsher.”

The findings come after a poll published last week revealed that a majority of Leave voters in Wales believed that Brexit should not be used to remove powers from the Senedd,.

Writing in a British Politics after Brexit report for the UK in a Changing Europe initiative, the academics used Welsh Election Study (WES) data to show that 52% of Leave voters rejected the suggestion that “the UK Government is right to remove powers from the Senedd if it is necessary to maximise Brexit benefits”.

There was also opposition to using Brexit to undermine devolution among 88% of Remain voters, and 71% of the Welsh electorate as a whole. 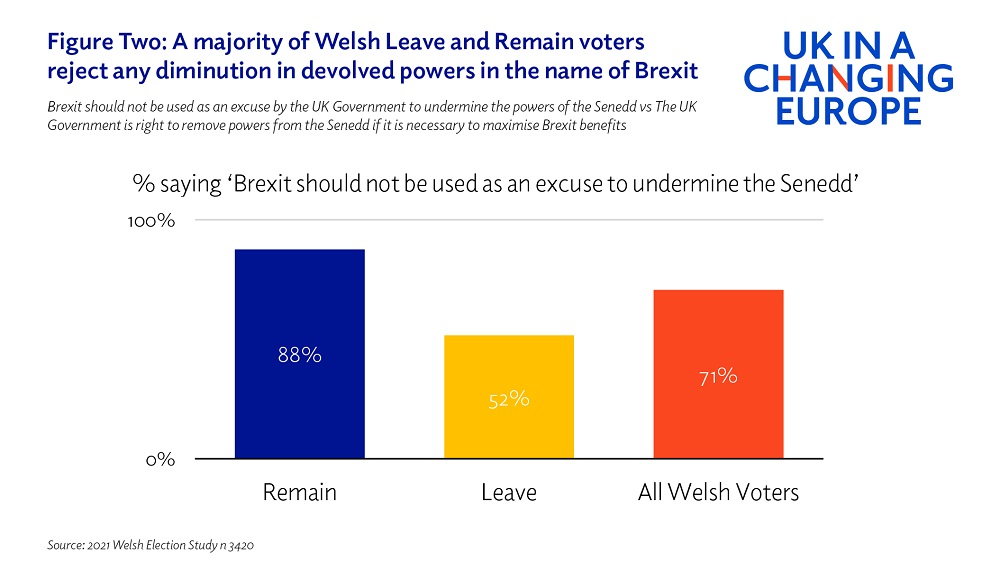 The data confirm that the Leave vote in Wales in the 2016 referendum was not fundamentally linked to scepticism over devolution, according to the authors Richard Wyn Jones, Jac Larner and Daniel Wincott.

This finding – that voting Leave and ‘devo-scepticism’ are not interlinked – was replicated at last year’s Senedd elections, where anti-devolution parties collapsed without generating an equal-sized increase in vote share for the Conservatives, they said.

Previous WES findings demonstrated that Welsh Labour succeeded in holding on to a larger than anticipated share of its own Leave voters.

Fewer than 50% of people in Wales consider themselves Welsh? That’s an eye-opener.

60% according to the last census

I Can’t believe that. I’ve never met anyone in Wales that doesn’t think he is Welsh first And.Who .would want to be associated with the BUTCHER APRON

I certainly consider myself to be Welsh and British(in certain circumstances).I am also an uncertain supporter of independence,although this has taken a hit due to the war in the Ukraine.

Seeing inspirational Ukrainians being willing to lay down their lives for their freedom makes me feel even more determined to do everything I can to achieve Wales’ own Freedom Day.

20% generally and 44% in places like Powys are English born immigrants so it isn’t that shocking.
Nearly two thirds (66 per cent, 2.0 million) of the residents of Wales expressed their national identity as Welsh in 2011. Census 2011

Without access to the original article, I’m assuming it relates to those who see themselves as Welsh ONLY.

What Brexit has done besides make people more conscious of their Welshness, has blown away those Anti-devolution fearmongers who said Wales was incapable of running its own affairs falsehood. Also leaving European Union makes it more clearer now who’s culpable for our social & economic ills. And yes, I accept the Welsh Government will be in the firing line too, rightly so, but for years Whitehall has evaded their responsibility opting to embrace any good as theirs and rejecting the bad as the fault of devolution. Whithall control still so much of our daily lives but negate responsibility favouring to… Read more »

We are welsh and European not British

Living in coastal northern Wales allows for a high level opportunity to mix with a very wide selection of people…in clubs, cafes . Chapel or just in the shops. The end of lockdown etc and the high level of re start meeting opportunities has led to a very high levels of exchange of ideas, comments and views. The professor is certainly 💯 per cent right in saying that the feeling of ‘ Welsh identity’ is higher than it was 2 or 3 years back. The professor is certainly 💯 per cent wrong that Brexit is the main purpose for this.… Read more »

Yeah, definitely an organised campaign: “your turn snooty” … “oh no, not my turn again!”

A mate who should know is trying to get me a copy of their attack rota and if successful it will certainly be shared on this site. I
also understand there are two or three in their ranks not at all happy with the campaigns’ focus or clumsy style and have withdrawn involvement.

Well, if they think taking-back-control is such a prize… why shouldn’t we.
Mae’n amlwg!

I’ve seen the same change – or a very similar one – over the last thirty years in Deeside, Flintshire. When I moved here, in 1988, people who were Deeside born and bred, and English-speaking (for at least one generation, often three) would define themselves as British, not Welsh. (They would, for example, say that they were “going to Wales” if they travelled west for a journey: “Wales” for them started somewhere west of Flint, certainly by darkest Holywell..) But: thirty years of people moving to live in new housing here, attracted by jobs in Chester and the far-cheaper housing… Read more »

So long as the union breaks apart and Wales takes its rightful place among the sovereign nations of the world, they can identify as pot plants for all I care.

This pot plant identifies as Welsh. Its botanical name is Polypodium cambricum: 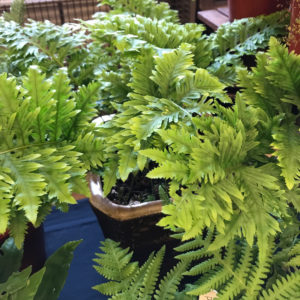