Welsh language campaigners in Carmarthen will demand a Full Property Act for Wales in the hopes it will curb second home ownership.

Cymdeithas yr Iaith will be shifting their emphasis from “Wales is not for sale” which campaigns against second homes and AirBnB properties, to instead calling for a Full Property Act.

A property act will be one of seven demands which Cymdeithas will be presenting to the Welsh Government this weekend in response to Census figures which found a sharp decline in Welsh speakers in Carmarthenshire.

Following a rally outside County Hall Carmarthen at 2pm on Saturday, hundreds of supporters are expected to march through the town, carrying seven demands, to the Welsh Government offices in Picton Terrace.

The march through the town coincides with the Hen Galan and will be led by the Mari Lwyd who will then, in a variation on the tradition, demand access to the Government Buildings to discuss the seven demands from Cymdeithas yr Iaith.

20 year old student, Cai Phillips, from Blaen-y-Coed Carmarthenshire, will be submitting the demand at the rally.

He said: “Cymdeithas will continue to put pressure on Local Authorities to fully use their new powers to control the excess of second homes and holiday rentals, but the housing problem is far deeper here in Carmarthenshire.

“I shall be looking myself in the near future for somewhere to live in the county, but there is no way the vast majority of local young people can compete on the open market with much richer people moving from outside to live here.

“We shall therefore be changing the emphasis of the campaign to pressing for a full Property Act for Wales which will prioritise local people and allow conditions on ownership of housing and land.

“Otherwise, young people will be forced out of their communities and there will be no future for Welsh-speaking communities.”

Last year, four times as many houses were sold as second homes in Wales compared with the UK average.

Recent proposals by cabinate ministers to get second home ownership under control in Carmarthenshire could see owners of second homes and long-term empty properties facing up to double the council tax.

In July last year, the Welsh Government announced a package of new measures to address the high numbers of second homes in Carmarthenshire.

First Minister, Mark Drakeford said: “Everyone should have the opportunity to afford to live in their local community – whether that’s buying or renting a home.

“Tourism is vital to our economy but having too many holiday properties and second homes, which are empty for much of the year, does not make for healthy local communities and prices people out of the local housing market.

“There is no single, simple solution to these issues. Any action we take must be fair. We do not want to create any unintended consequences, which could destabilise the wider housing market or make it harder for people to rent or buy.”

The royals’ ownership of Llwyn Y Wermod near Myddfai is used by some as justification for other such ownership. The royals should be taxed annually 100% of the market value of their property in Cymru.

It is all very well for local councils and the Welsh government to blame others for the affordable housing issue, however the figures speak for themselves: 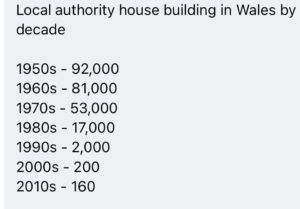