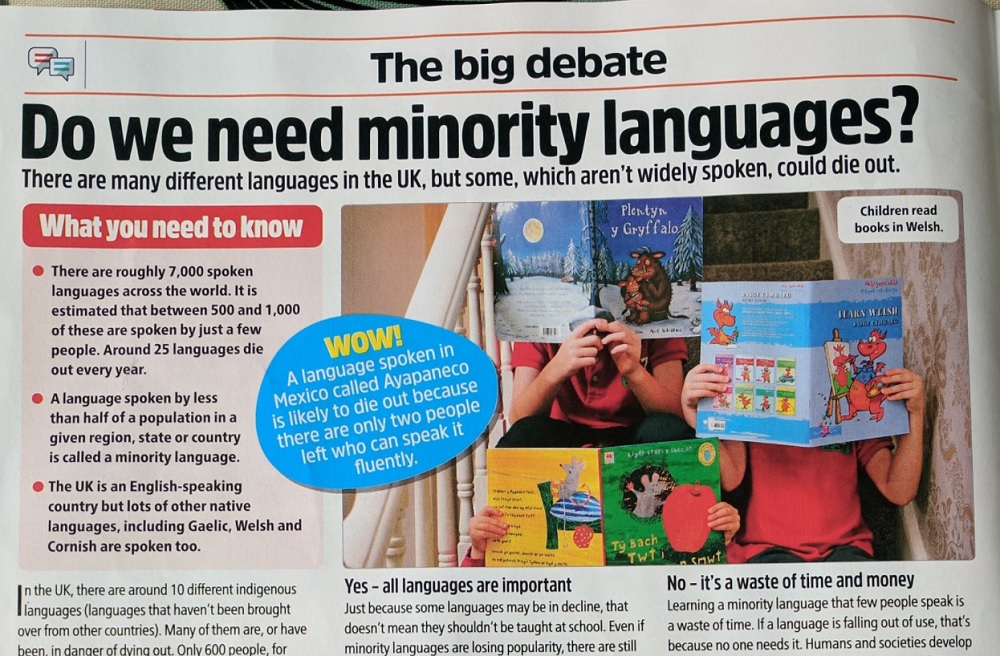 A children’s magazine has apologised after publishing an article that listed reasons why minority languages weren’t needed.

Welsh Language Minister Alun Davies had criticised The Week’s Junior article which suggested that minority languages were “a waste of money”.

“We need to be very clear that this is not an acceptable debate,” Alun Davies he said. “No other minority would have their right to exist questioned in this way.”

The article suggested that minority languages are “a waste of time and money” and that if a language is falling out of use, it is because “no one needs it”.

A statement by the Editor Anna Bassi said that the topic should not have been covered in the way it was.

“The Week Junior’s Big Debate feature on the preservation of minority languages has caused a lot of upset over the weekend,” she said.

“The aim of the debate piece is to get our readers thinking and talking about some of the issues that are featured in the UK press.

“We firmly believe in encouraging young people to explore important issues and allowing them to form their own opinions and develop critical-thinking skills.

“However, I recognise that coverage of this important topic in the form of a debate has caused offence and should have been covered in a different way.

“I would like to apologise both personally and on behalf on the magazine.”

The article had been criticised on Twitter by many who felt that it would skew young reader’s perceptions of minority languages.

Having a debate about the value of lesser spoken languages is in itself anglo-centric and offensive. You don’t get to choose what we speak.

Sides of the debate? Try explaining that to my 8 year old daughter who doesn’t understand why you’re demonising the language she speaks. https://t.co/y6XpBYHBjc

The article comes in the wake of numerous controversies in which The Guardian, Times, Newsnight and Sports Direct have been criticised for their handling of issues related to the Welsh language.

The editor, Anna Bassi, should be congratulated for such a quick response. Too much of the MSM is mealy-mouthed and slow in response
.

I have no problem with keeping minority languages alive. My problem is with the Welsh Language. It was forced at me in school at the expense of a European language I wanted to learn, it has been rammed down my throat since then (exactly as another esteemed correspondent said) kids are being brainwashed at a young age that it is the “right thing to do”. It hits me on the roads, where it creates confusion, on Railway Stations, and on official communications that I have never asked for in two languages. Ask me and I would vote for a language… Read more »

If you don’t like Welsh, then perhaps you need to move somewhere else where you don’t have to see it, and we no longer have to hear your pathetic laments about having Welsh ‘rammed down your throat’. I’m sick and tired of being treated as a second class citizen in my own country because of the crypto-racist attitudes of people like you.

Thanks, for that, sibrydionmawr…It says it all. Diolch!

This is so tiresome. The ‘rammed down my throat’ meme totally ignores that Welsh speakers – in their own country – constantly see and hear English everywhere. And they pay for it, to boot – in the form of taxes (paying for official paperwork, forms, etc.); local rates (which pay for council services provided almost exclusively through the medium of English, except for the occasinal token “Bore da” on the phone); and TV licence fee.

Wonder who Brian ap Francis is????? like we all don’t know Jaques

just some clown who doesn’t get out much, so takes up trolling . Pity he’s no good at it utterly lacking in wit and sharpness.

Glad to hear that at last we have had an apology, and a sincere one that shows Ian Katz’s own sarcastic response in its true light.
There is no ‘debate’ in Wales about the value and importance of the Welsh language, and any attempt to conjure up such a debate in the English media comes across as part of an attempt to reduce the chances of the language’s survival and growth.
What is their motive in wanting to eradicate a country’s national language?

The Week Junior describes it self as a current affairs magazine for 8 and 14 year olds, written to engage curious young minds and encourage them to explore and understand the world around them and offers them the chance to consider both sides of a topic and weigh up the arguments… worthy aims, for the most part met. Not this time though, and an apology was indeed due…. and has been given Basically there are 2 arguments that can apply about almost anything. 1. If a thing has no utility to you it has no value. 2. Many things have… Read more »