Further measures are set to be introduced to try and alleviate “chaotic” traffic which has blighted a village near a popular beauty spot.

Ynys Llanddwyn, off the Anglesey coast, is known for it’s lighthouse, pilots’ cottages and church ruins, attracting tens of thousands of visitors every year.

But fed-up residents of nearby Newborough have long urged action amid reports that “bumper to bumper” gridlock in the heart of the village has seen motorists stranded in their cars for up to 30 minutes at a time.

According to one, the volume of traffic was said to be so bad last summer that some locals were unable to leave the village to drive to work.

With the only public vehicle access to Llanddwyn’s main car park being the narrow road along Church Street, past suggestions have included developing a one-way system by allowing vehicle access along currently private tracks through Newborugh forest.

But after a public meeting was held in 2019, both Natural Resources Wales (NRW) and Anglesey Council looked at potential workarounds including more yellow lines along Church Street to ensure smoother flow.

According to Anglesey Council, with plans to install yellow lines further down Church Street already in the pipeline, they also plan to paint more lines in the heart of the village.

But local councillors claim that locals have been kept in the dark, with such a move prompting questions over where they could park after the no waiting lines were painted.

Cllr Peter Rogers said: “While we’ve been crying out for something to be done for years, there’s a real feeling locally that they’ve been shut out of the process.

“We’re told now that they will allow locals to use the car park near the old public toilets, but with space being limited to say the least, what guarantee is there that there will be any room for them?

“Is there going to be a permit system in place, or a section blocked off? Would who’s parking there be policed? There are so many questions that remain unanswered.

“There are differing opinions in the village as to how to sort out the issue, and it’s difficult to please everyone I agree, but there are fundamentals that need sorting before restricting parking or implementing no waiting restrictions.”

Cllr Bryan Owen acknowledged that traffic in the village was “chaotic” in the summer, but there had been question marks over the status of the former public toilet and car park, which was placed on the market several years ago.

He added: “In my view the answer is still a one way system with cars coming out near Llyn Parc Mawr on the Malltraeth road, but for some reason NRW won’t entertain it.

“But residents along Church Street will want reassurance that the bays at the car park will be designated or else the system won’t work at all.

“With lockdown easing soon, traffic will be worse than it’s ever been, being one of the most popular tourist spots in north Wales.” 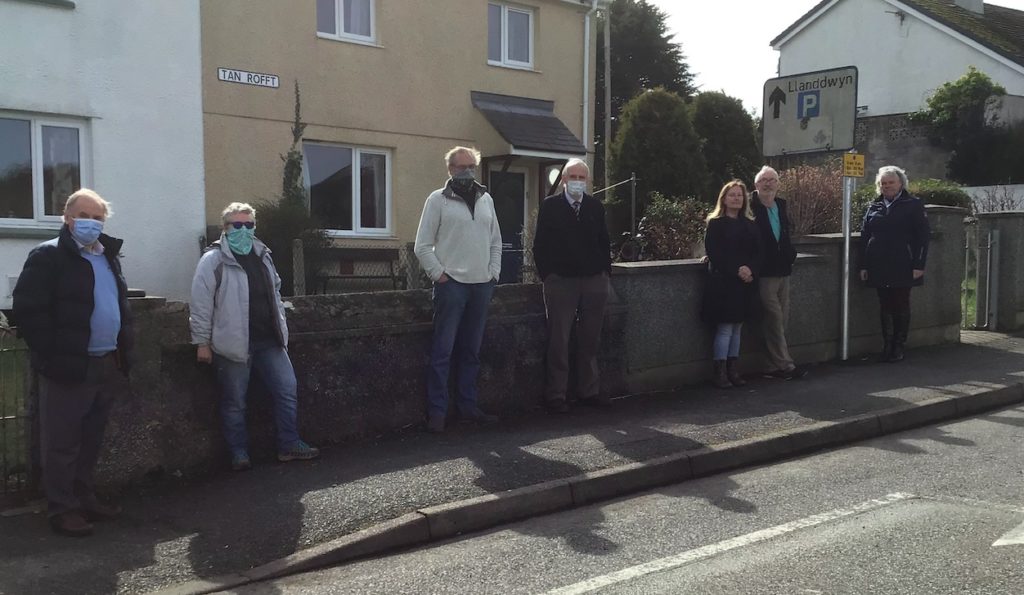 With parking payments set to be reintroduced at the main Llanddwyn car park once travel restrictions have been lifted, NRW has already announced that residents of Newborough, Dwyran, Llangaffo and Malltraeth will be eligible to apply for a free pass to use the main beach car park.

Dylan Williams, NRW’s operations manager, said: “We have been working closely with the local authority on the development of a new traffic plan for Newborough, focussing on reducing congestion at Church Street,

“As part of this plan we are looking at the parking situation, including putting in place a new charging system and regulating the flow of traffic in the village, especially during peak periods such as Bank Holidays.

“Long, medium and short-term options are being considered for the site and we will fully consult with the community on any proposals that are taken forward.”

An Anglesey council spokesman said: “We are aware of parking and congestion issues on Church Street and have been working with NRW, local county councillors and Rhosyr Community Council to investigate and agree improvements.

“NRW will be introducing alterations to their car park which will reduce congestion and the council has introduced double yellow line parking restrictions near Llys Rhosyr. This follows a statutory legal and consultation period as required for a Traffic Regulation Order (TRO).

“It is further proposed to introduce an experimental TRO to prohibit parking on the lower section of Church Street with the intention that local residents will be able to use the car park when it becomes operational.

“The arrangements will then be monitored over the 2021 season and reviewed before discussing suitable permanent measures with the community council and county councillors.”