A town council has refuted suggestions that it agreed to distribute a Tory MP’s electronic “propaganda” leaflets on her behalf.

In light of the claims originally made in a social media post – but since corrected by the Anglesey’s MP Virginia Crosbie – Amlwch Town Council moved to deny that members had agreed to distribute the monthly communications. The incident has since been blamed on a “misunderstanding”.

Virginia Crosbie, elected as the island’s MP in December 2019, says that the issue has been amicably resolved while insisting that her regular e-newsletters are “non-political”.

Following a virtual meeting with town councillors last week, a post on the Conservative MP’s Facebook page stated that the town council “had agreed to distribute her monthly e-newsletter to the community.”

But after a swift denial and a request to remove the post, it was subsequently edited to clarify that the newsletter would only be shared among town councillors. 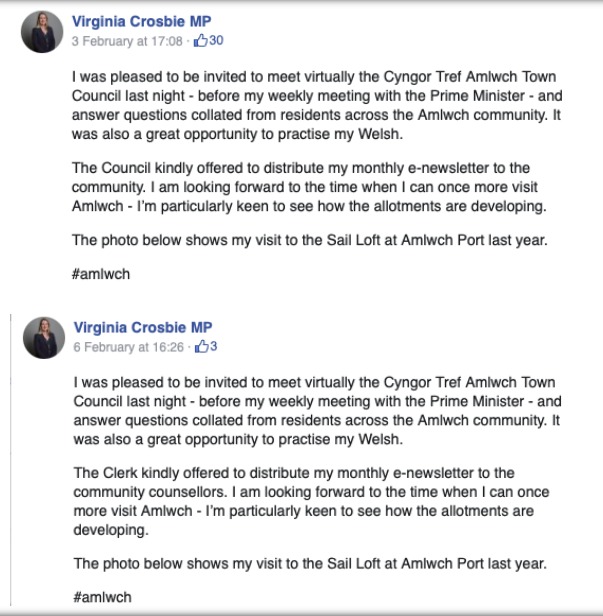 In a statement, a spokesperson for Amlwch Town Council told the Local Democracy Reporting Service : “During a Zoom meeting with the local MP on February 2, Ms Crosbie requested that the town council distribute her newsletter to Amlwch residents.

“The council refused to do so, but indicated that, as is normal practice with all communication received by the council, that it would be made available to town councillors.

“On her Facebook page Ms Crosbie stated that the council had offered to distribute her newsletter to Amlwch residents.

“As a result the council has contacted the MP bringing to her attention the misunderstanding, and requesting that she delete the appropriate post and to acknowledge on her Facebook page the correct information.

“As a council we pride ourselves on having a good working relationship with all of the Island’s representatives and will continue to do so in the future for the good of the island and our town.”

But in a statement widely shared online, Ynys Môn’s Labour branch stressed that MPs are required to comply with the UK Data Protection Act.

“You might have thought that our MP would have thought twice before asking Amlwch Town Council to distribute her e-newsletter, which would have meant using a town council database of email addresses,” they said.

“This is inappropriate as one would have agreed to be included on such a database to receive information on local news and events.

“Nobody supplying their details for this purpose would expect to receive what is basically political propaganda from the Conservative Party, in fact, email addresses are exactly the sort of personal data that must be protected under the Data Protection Act/GDPR.

“Subsequent conversations between councillors, after the MP had left the meeting, confirmed the view that distributing political material on behalf of a Member of Parliament would not be appropriate or desirable.
“Distribution of Virginia Crosbie’s e-newsletter in this way would have given the impression that Amlwch Town Council were endorsing the contents.”

In response, Ms Crosbie said: “This was a minor misunderstanding with the town council that was sorted out a week ago.

“Quite what it has to do with the Ynys Môn Labour Party is perhaps the real question here.

“But I suppose when you have Labour down in the national polls and saddled with an uninspiring leader you do need to manufacture a non-story to shift the focus.

“My great hope now is that this publicity will encourage more people to sign up to my non-political newsletter crammed full of non-political news about local people and what I do as the elected representative of this wonderful island.”