Developers have said a planned business park on a family farm would create thousands of jobs and attract millions in investment.

Cardiff International Business Park would be built on farmland east of Cardiff Airport in the Vale of Glamorgan.

But the plans have attracted heavy criticism from campaigners and politicians fearing the impact on the environment of “concreting over” a working farm.

The business park would be built on Model Farm, off Port Road, which has been farmed by the Jenkins family for four generations. The family previously said they were “devastated” that they would have to leave the farm, but are hoping to continue their wildflower seed business.

Now Legal and General, the developer behind the scheme, has said the business park would create 4,375 jobs and attract £525 million investment, boosting the local economy.

Andrew McPhillips, Legal and General’s development director of strategic land and major projects, said: “This is a key project for Wales and we know it is important that we continue to communicate our plans to key stakeholders, the community and future partners.

“Wales must be open for business for those who want to invest and consider investment in its future global economic development. The land has been allocated for planning within the enterprise zone for a number of years.”

As well as building the 45-hectare business park, the plans involve giving 48 hectares of farmland to Vale of Glamorgan council, to massively extend the neighbouring Porthkerry Country Park. A corridor of land along Porthkerry Road would also be kept safeguarded, connecting the nearby railway line with Cardiff Airport for a potential new train or tram service there.

Mr McPhillips said: “We have already agreed the transfer of 48 hectares of land to the Vale of Glamorgan Council to form an extension to Porthkerry Country Park, for use by the community with added funding for environmental management.

“This transfer will provide more public access with connection to the Wales Coastal Path, and access on foot from Porthkerry and Rhoose. From an environmental perspective, this transfer goes beyond mitigation and provides significant biodiversity net gain. There would also be 10.3 hectares of green space within the business park.”

Legal and General bought the farm several years ago, and it was earmarked for a major building project in 2017, as part of Vale of Glamorgan council’s local development plan. The site is also in one of eight enterprise zones in Wales, where the Welsh Government is focusing economic development and encouraging businesses to invest.

Last summer the Vale council’s planning committee voted to grant permission for the business park at Model Farm. Campaigners then successfully applied for a judicial review, leading to the permission getting quashed. Now, another planning application has been sent to the council, and a public consultation on the plans is running until February 17.

Then in the next few months, councillors on the planning committee will again be asked to vote on whether to approve permission for the business park. The last vote was split along party lines, with nine councillors voting in favour and eight against. With the upcoming local election in May, the political makeup of the committee could change, affecting the next vote.

But in the meantime, Legal and General has released new estimates of how Cardiff International Business Park could boost the local economy. With overall floorspace of the development covering 160,000 square metres, it’s expected the business park could provide space for 4,375 full-time employees.

However, Maxine Levett, a campaigner with Vale Communities Unite, said several questions regarding the plans remain unanswered. She added the business park would be “detrimental” to the community and environment, and was unnecessary with several vacant brownfield sites nearby.

She said: “This is a working farm helping feed the community and encouraging biodiversity, when the Vale council has declared a climate emergency. The current land available at the Bro St Athans site shows there isn’t a requirement for this type of development, as there are thousands of square metres of brownfield sites waiting to be scooped up.

“Who will finance the road works to accommodate the impact of potentially 3,000 extra vehicles from this site, on top of additional transport needs from recent residential buildings and the proposed development of Aberthaw power station?

“Bristol Airport has declared they are increasing their passengers to 12 million a year. This will greatly impact companies willing to fly out of Cardiff Airport. And where is the funding coming from to provide a rail link to a planned transport hub?

“We will continue to fight this development as we feel it to be detrimental to the community, environment and unnecessary with Aberthaw, St Athan and other locations near to the M4 corridor better placed to meet employment needs, rather than a working farm.”

Contrary to the views of campaigners and some local politicians, Legal and General has claimed it would preserve and enhance the environment. Plans include three kilometres of new hedgerows, and planting five acres of scrub and woodland, as well as extending Porthkerry Country Park.

Mr McPhillips said: “Legal and General has been committed to Wales as a progressive investor and substantial employer for many years. This is a project which will increase economic growth and we will continue to pursue the planning viability sensitively with existing stakeholders.

“Creating 4,375 jobs and investment of £525 million must be seen as essential for the future of the Welsh economy, especially next to Cardiff Airport. This investment in business infrastructure by Legal and General enhances the Welsh Government’s current major investment in Cardiff Airport, a strategic gateway to facilitate international connectivity.”

Rather than building on a good farm that happens to be near the airport the developer should be using a brown field site a little further inland. I don’t think it would take a geographer as clever a Dominic Rabb to find such a site in one of the Valleys. To make the development there would be good for the Valley that is chosen, would be environmentally better and would show that the developer has got their head around Climate Breakdown. They should surely realise that Cardiff airport is an asset with a short life expectancy, asuming that governments are… Read more »

I would like to use Cardiff air when I fly home, although would like Wales air to be central and connected to good north – south roads. I wonder what other international Cymro want? It’s a long exhausting haul by ship and train.

If the business park is not maintenance hangars but is simply another industrial estate then L&G’s claim that it will “serve the aerospace industry” is probably untrue. In any case such a business park could be sited anywhere reasonably local to the airport.

To answer your question, air passenger duty devolved, and this airline back in business. I’m still sad that I never took an Awyr Cymru flight. 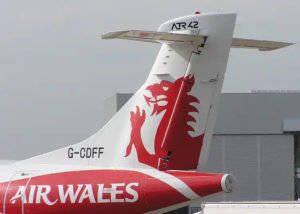 Really tired of this: 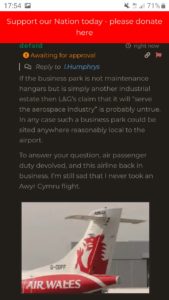 4375 jobs? Yeh sure we’ve heard it all before. There might be 25 managers jobs for people with plummy accents.

No matter how many times they recycle bulls**t it always looks and smells the same !

I’m sure the Welsh Conservatives, especially Andrew and Natasha, would far prefer the airport itself be closed and the business park sited on there.