Lord Dafydd Elis-Thomas has questioned the need to continue with the title of the Prince of Wales following the death of Elizabeth II.

Speaking of S4C Newyddion, the former presiding officer in the Welsh parliament said that there was “no meaning” to the title.

King Charles III has now relinquished the title and it does not pass on automatically to his son Prince William.

Dafydd Elis-Thomas said that the Prince of Wales was not a “constitutional position, there is no meaning to it in the constitution”.

“And I think, although nothing will happen this time, I I think this title will disappear because it doesn’t make any sense for a devolved, democratic country like Wales to have a prince these days,” he said.

“I think there needs to be a discussion in Wales regarding what should happen to the title Prince of Wales and what is the use of that title, especially since Wales has become a new, democratic, republic.

“What sense does it make to have a Prince of Wales who has no constitutional function? But that is a matter for discussion.”

Dafydd Elis-Thomas said that he felt that the Queen was not supportive of devolution in the 1970s but had warmed to the idea as the years progressed.

“She understood through her experience in Scotland what was happening in Wales and I said to her at one point, ‘we are determined that anything that has happened in Scotland, it is going to can happen here too, do you understand that?'”

We don’t need a monarchy,

I want to be a citizen of Cymru not a subject of an English monarch.

My daughter sent this: 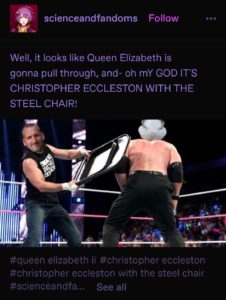 So she’s a gobby b**ch too? You and your diatribe (dire tribe) are doing nothing to help Wales. Would I vote for people like you ? No!
I am not a royalist. I am a proud Welshman, but I do not want to see my country dragged into the gutter.

This is the only thing I agree with Dafydd Elis Thomas. We don’t need a Prince of Wales anymore. The title should cease permanently today. But the reality is we’ve never had one in the first place. Our & Britain’s native monarchy ended in 1282 with the death of Llywelyn ap Gruffudd. Time Wales became an independent republic. not a convenience for Prince William. & Kate.

It was temporarily revived with the revolt of Owain Glyndwr but ceased after that.

I don’t care what people call William or how many documents he has “confirming” his title, I and many others will never recognise him as our Prince.

We don’t need an English Prince of Wales.

Even Royalists should surely want to get rid of that title so modernise the family? Where is that petition??

In this day and age, during a cost of living crisis and given the sensitivities around the monarchy and the union at this time, it is grossly tone-deaf to push ahead with the investiture. It is also disrespectful to our country to blindly carry on with this tradition, given we are a country whose democracy is increasingly at risk from the Westminster cabal, the Royals’ biggest supporters. The titles and pomp and ceremony, is another cost the country cannot afford. The monarchy is not popular with the young, who will question the “need” for this. It’s time this lot were… Read more »

not often I agree with d e t these days but he got this right.can’t get my head around the fact that he has been such a royal arse licker in the past though.

The Welsh situation requires someone to have a dialogue with the Monarchy. Alex Salmond did this effectively in Scotland. Here’s the reason: the best option for Wales in the next stage is Dominion Status ie 90% Indy. This requires leaving the Monarchy as a link with the Commonwealth. We should take this deal every day of the week. DET understands this. After the deal, we can kick on to 100% Indy if Wales so chooses. Ask Aussies about this.

Most Commonwealth member states are republics. Indeed, it is looking like the UK and Tonga will be just about the only remaining monarchies.

Make no mistake, with muscular unionism at the helm the establishment will push for another investiture in Caernarfon in order to try to ‘fix’ the union. Feelings have grown even stronger since 1969 and the resulting backlash to yet another Prince of Wales will play into the hands of the Tories who will happily blame it on devolution and the rise of Yes Cymru. Wales must now tread carefully. No disrespect to the Queen but a petition needs to be started as soon as possible after her funeral.

These were my thoughts yesterday, this is how they have always subdued us, guarantee this will happen in Caernarfon

It’s possible that they’ll organise it soon, while there’s enough sympathy in Wales for the royals courtesy of the death of QE2, before people move on.

Could someone please tell DET we don’t need LORDS too.

“What sense does it make to have a Prince of Wales who has no constitutional function? But that is a matter for discussion.”

I don’t get this point at all. It is purely an honorific title. The title “Baron of Nant Conwy” does not mean that Dafydd El has any special constitutional rights, privileges or functions in Nant Conwy. Same for “Prince of Wales” in Wales.

An honour, not an office.

Don’t be surprised if the Conservatives push for another Prince of Wales, they’re muscular Unionists after all. However, Charles seems a decent man, in fairness, so hopefully he’ll stop the succession. We’ll see.

We have no say. They don’t even think they should ask.
The English royals and their entire establishment do not care for the opinions of the peasants in Cymru. They will do as they want with us, and to us. They think they own us. And too many of us think they do too. We are subjects, subjugated, and subjected to their whims.
Until the second we decide not to be.
Get off your knees! Shake off this dust of history. And stand for yourself. As an equal.

This needs to stop now.