Essential maintenance work can take place on one of the Elan Valley Dams, now that a planning application has been approved.

Back in April a listed building consent planning application by Welsh Water for the Grade II* (star) listed Craig Goch Dam, had been lodged with Powys County Council planners.

Craig Goch (Red Rock) is also called the “top dam” as it creates the highest of the Elan Valley reservoirs.

It is a listed building as it has: “High evidential value as an impressive piece of civil engineering, constructed as part of a scheme to provide water and sanitation to industrialised Birmingham.”

The application was passed on to Cadw, the Welsh Government’s historic environment services to decide whether the decision needed to be taken in Cardiff or kept in Powys.

Rhodri Kelly of Cadw, said: “The information supplied has been considered and the proposals as shown need not be referred to the Welsh Government.

“I therefore confirm that it is now for your authority to determine the application.”

The Powys planning report on the application believed that the development  “would not detract” from the character and appearance the dam.

There are five conditions attached to the planning permission and one is: that the development follows the plan set out in the Heritage Statement and Impact Assessment by Oxford Archaeology.

Oxford Archaeology said: “The proposed works are necessary modifications to the water management scheme to ensure its adaptation to a changing environment and to enhance health and safety measures.

“These changes will safeguard the dam’s continued use and maintenance in to the 21st century.”

Craig Goch Dam is one of four dams on the river Elan which were built to supply water to Birmingham between 1893 and 1904.

It is the furthest upstream of the series of dams, located at a height of 317 metres above sea level.

It cost £6 million to build the dams, aqueduct, and Frankley Reservoir near Birmingham, which is where the water pumped from the Elan Valley is stored before it is piped into the city.

There was significant opposition to the scheme because of the loss of communities and land.

As construction work started in 1893 a number of buildings had to be demolished including eighteen cottages, a church, a chapel, a school and two substantial homes.

King Edward VII and Queen Alexandra visited the Elan Valley on July 21, 1904, for the official opening of the new water supply for Birmingham.

It takes two days for the water to travel from Mid Wales to the Frankley reservoir.

Nice pictures and an informative read, if one put a message in a bottle it would take two days to get to the Brum sorting office…so when do they add the poo? Simon Jenkins puts it into a readable outrage. Some German firm has been giving Stwlan Dam a coat of white something for a few years now, it is two thirds done…Longshank’s castles used to look like that once upon a time, you can still see a bit of whitewash on Harlech…

For those who don’t know it is a pump storage res not for drinking, if any of you Bay types ever fancy a trip north to see how the other half live there is a fine cafe beside the lower res and it is a great walk up to Stwlan, the view is tremendous. The white coating brings out the dam in a most pleasing way when approaching from Traws, there is another lakeside cafe at Traws that is well worth the visit and a walk round the lake, add a visit to Tomen y Mur, a small but perfectly… Read more »

Tomen y Mur is a full-on fort. Blithely (and misleadingly) making it sound like a Welsh Colosseum, it had masonry walls, parade ground, inn, amphitheatre, tile kilns… I haven’t been there for a few years but I’d imagine this dry summer will have outlined buildings’ foundations inside the fort with crop marks. One corner of the fort wall has been reconstructed. I’ve no idea who did it. There’s not much else to see beyond the rubble lines of the outer walls and the hollow of the amphitheatre. And obviously the motte… but it’s wonderfully atmospheric and imagination fills in a… Read more »

Sorry defaid, I know that but could not be bothered to correct it. I pass it every week and if I get a chance I take or recommend as I just did anyone to go there but now I know you are watching I will be very careful to use the correct terminology at all times Heddwch dros y Byd bruv…

lol. I was fairly sure you did! It was other readers I had in mind.

Wouldn’t it be a shame if it sort of fell over, gradually? 🤨 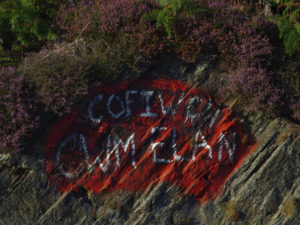 Well, Dŵr Cymru Welsh Water goes on and on about being a ‘not for profit’ company, yet we pay more for water here in Wales than Thames Valley do for theirs, and Thames Valley Water is in business to make money. Maybe all the extra cost on our Welsh Water bills goes towards maintenance of ageing reservoirs we’ve inherited in order to supply cities across the border with water currently at 3p per tonne.