Exhibition to mark 40 years since the Nuclear Free Wales Declaration

The Campaign for Nuclear Disarmament in Wales is to mark the 40th anniversary of the Nuclear Free Wales Declaration with a webinar, a new website, and an exhibition touring Wales.

The exhibition will visit locations in all 8 of the County Councils that existed in 1982, including at the Eisteddfod in Tregaron, and finishing in the Senedd in early December.

Wales was declared ‘nuclear free’ on 23 February 1982 after local authorities around the country refused a UK Government instruction to draw up civil defence plans, including the establishment of nuclear bunkers from which the aftermath of a nuclear war would be “managed”.

After opposition to the government’s plans, all eight county councils eventually refused to participate and passed resolutions declaring themselves nuclear-free zones.

The Nuclear Free Wales Declaration emphasised that the whole of Wales was declared a nuclear-free zone, and that the people of Wales wished to live in peace without the threat of nuclear war. 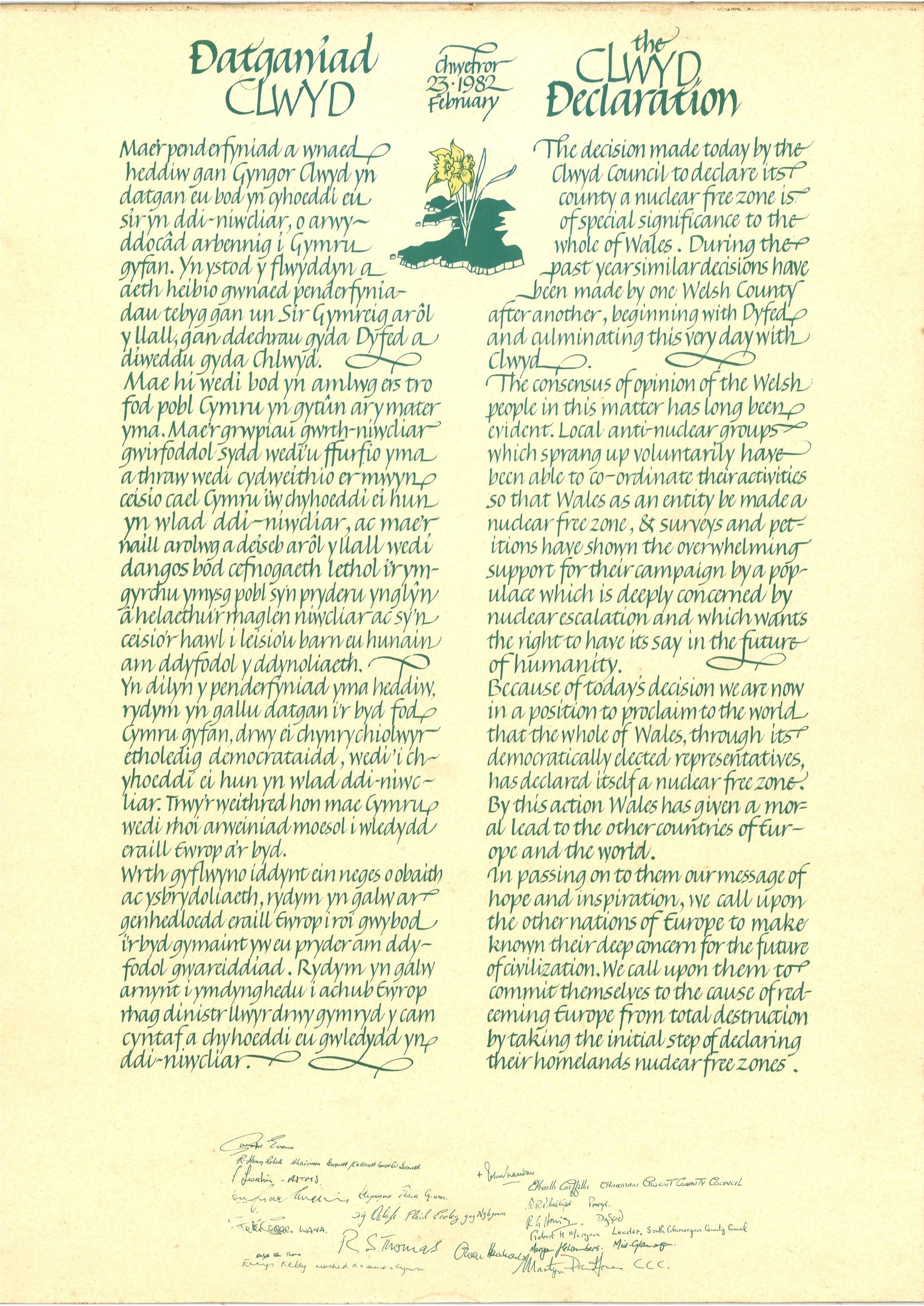 Brian Jones, Vice Chair of CND Cymru, said that 28 February would be “a time to remember what’s been achieved, and to re-focus on what remains to be done”.

“Despite the opposition of the nuclear weapon states, the Treaty on the Prohibition of Nuclear Weapons is supported by 130 countries at the United Nations”, said Jill Evans, CND Cymru Chair and former Member of the European Parliament.

“There’s still a lot of campaigning for nuclear disarmament to do, of course, but when we convince the UK, and the other 8 nuclear weapon states, to consign nuclear weapons to history, it will be this treaty that countries will sign.”

The webinar will also feature Susi Snyder of the International Campaign to Abolish Nuclear weapons.

ICAN were awarded the 2017 Nobel Peace Prize after their 10 years of diplomacy resulted in the Treaty on the Prohibition of Nuclear Weapons being adopted by the United Nations.

Susi Snyder’s particular role within ICAN is the ‘Don’t Bank on the Bomb’ project, which encourages financial institutions to disinvest from companies involved in nuclear weapons production.

Utterly asinine now as it was then. Trivial thinking based on idiotic assumptions. None of these people seemed to realise that if a nuclear war had happened there would have been survivors – many of them – who would have needed some organised assistance. And before anyone starts carping, anything would have been better than the nothing these people were proposing.

Leigh Richardss
Reply to  tired of this

Er after a nuclear war the living would envy the dead and – to quote Einstein – the next world war would be fought with sticks and stones!

According to the Morning Star (https://morningstaronline.co.uk/article/f/jeremy-corbyns-speech-national-eisteddfod-hiroshima-day-2022), Jeremy Corbyn MP was invited to attend the event at the Eisteddfod, where (they report) he gave a speech in English (unless their copy is a translation or he himself didn’t deliver the speech they published). Don’t events in held in English break the Eisteddfod rules?

According to BBC’s Newyddion, Corbyn was later seen at the YesCymru stand and reportedly making supportive remarks – which would surely be a major U-turn for his previous Internationalist and Labour unionist positions (shared in common by ‘Welsh’ Labour).