Support for Welsh independence is a “Celtic virus”, a former editor of The Times has suggested.

Simon Jenkins, who is writing a history of Anglo-Celtic relations, said it was “defying all efforts at immunity”.

Jenkins, who also used to edit the Evening Standard, and has previously claimed that Wales considers itself a “subordinate” nation, said the “number of those favouring an implausible independence has quadrupled in the past decade”.

The author of ‘Thatcher & Sons’, and ‘Short History of England’, added that “Brexit has clearly upset the chemistry of Anglo-Celt relations”.

He also suggested that all London had to do in the past was “tell its troublesome Celts that they should remember how lucky they were to be ruled by England and shut up”.

But according to Jenkins a “reawakening of national identities could spell the end of the United Kingdom.”

In a column for the left-wing magazine, The New Statesman, he said: “The Celtic virus is back in British politics and defying all efforts at immunity. The first wave hit Ireland in 1921 and broke the island in two. The second wave was overcome with devolution in 1999 and subsided.

“The third is now upon us and the outcome is uncertain. When at last month’s G7 summit in Cornwall the French president Emmanuel Macron taunted Boris Johnson for trying to rule four nations not one, Johnson was furious, but he choked on his Northern Irish protocol.

“Every headline now indicates that the United Kingdom is anything but united. Relations between Scotland and England are more contentious than they have been since the Tudors.

“The festering wound of Northern Ireland has gone septic. Even in Wales, the number of those favouring an implausible independence has quadrupled in the past decade.

“A ghost now hovers over the British Isles, that of a new European nation in the offing, called simply England.”

He added: “When the British empire disbanded over the course of the 20th century, the fate of the ancient English empire of the British Isles was left unresolved.

“The English assumed they had assimilated the Welsh and Scots while the Irish Question had been ‘parked’ with partition.

“That a small group of islands, liberal, rich and with a long shared history, could fail to establish a harmonious union seemed preposterous.

“Its neighbours, Germany, France, Italy, even Spain, had deployed devolutions and federations to merge the loyalties of their diverse tribes.

“All London could do was tell its troublesome Celts that they should remember how lucky they were to be ruled by England and shut up.”

He should edit a magazine called “Stating the Bleeding Obvious”. Empire is over….. It stops just east of Hay.

“That a small group of islands, liberal, rich and with a long shared history, could fail to establish a harmonious union seemed preposterous.”

RICH? Our neighbours have ensured that is not the case.

How can somebody be so wilfully ignorant unless they are trying to proliferate a LIE?

Actually this is just lashing out. Just like so many poor English wives will have faced their husband’s wrath last night, the Tory establishment is lashing out at the “lesser” nations. Pathetic

I don’t suppose that Simon Jenkins’ opinion is influenced by the presence of the “Family Home” in Pennal by any chance? and the potential increase in its rates.

An arrogant little Englander whining that he can’t shut up the Celts. We shall have to shout louder, as it’s clearly working 😁 CYMRU AM BYTH!

Simon is losing it big time as he ages. 1921 was far from the first wave since Home Rule All Round began with the Liberals in 1886 and Scotland was given Home Rule in 1914 until the Lairds threw a rearguard action in the HoL.

It has to be remembered that Chamberlain and the rest right down to Lloyd George were Unionist politicians trying to save the Union and 135 years later we have unionists trying to save a union that the Conservative and Unionist Party is hell-bent on destroying.

Are you really so delusional that you think that the Welsh government is Marxist? Or are you one of those hyper-Thatcherites that considers anything to the right of Thatcherism as ‘Marxist’. Or perhaps you are just plain ignorant of what ‘Marxism’ actually is?

In any case describing the Welsh government as ‘Marxist’ reminds me of the idiot SWP members who used to describe Thatcher as ‘fascist’.

The Welsh Government are Social Democrats. Marxism as a political idea is very unpopular and has had very little success at the ballot box. Proponents of Marxism have had to resort to entryism to gain any traction. (Militant, Momentum etc.)

Thatcher was anything but fascist, Her bible was Fredrich Hayek’s The Road to Serfdom. She thought neoliberal economics would free the individual from state tyranny. Paradoxically she had to adopt the full powers of the police state to try to implement this free market utopia

Neoliberal economics purportedly freeing the individual from state tyranny is classical Fascism, according to F.D. Roosvelt’s address to Congress on 29th April, 1938.

He has a good point there.

I was replying to an earlier post that appears to have been removed but my reply has remained which means it is now out of context. The post that I was replying to stated that we were better off with English rule rather than the Marxist government in Cardiff. My post (see above) was to make the point that labelling anything remotely leftish as Marxist is just plain ignorant, lazy or else just outright lies and propaganda intended to undermine the credibility of those who are (wrongly) being labelled as ‘Marxist’. As you point out the Welsh Government is more… Read more »

In all fairness, it is rather difficult these days to say if anything is left or right, At least you knew where you stood with Thatcher and Foot. Since Blair, Labour had moved so far to the right they were being attacked from the left by the Daily Heil of all people. Yet you had conservatives advocating for same sex marriage and hug a hoodie. Every party seems to be vying for the centre using right wing economics and left wing culture. The political spectrum has become very narrow indeed to the point where anyone outside the narrow confines of… Read more »

1983 Foot wanted to take the UK out of the European union, without even a referendum, and Thatcher wanted to keep it. Landslide victory for Thatcher. 33 years later Brexit changes from ‘loony left’ to right wing policy. I wish people would make up their bloody minds! 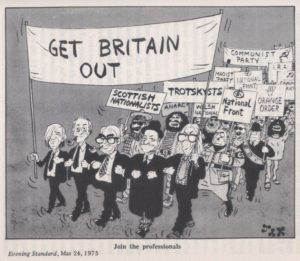 Mandi A
Reply to  Bruce

Cos now we are beginning to understand what English fascism actually looks like. Turns out Westminster is just a convenient micro-planet floating in space from which to launch an evil New World Order. Our European friends in countries such as Spain, Italy, Germany and many Eastern Europeans would have no difficulty in recognising incipient fascism. Meanwhile, we have Red Wall constituencies turning blue and voters everywhere except happily Scotland who will vote for the nearest expense-fiddling, smarming, sexual harassment on legs wearing a Tory rosette. Clever, clever populists.

Mark – I take it that your words are either intended in jest or to provoke anti-Eng establishment reaction? Otherwise the phrase the consists of a word contained within ‘bring’…joined with ‘piece’ springs to mind.

The only virus that is a problem in the UK is the inglish exceptionalism virus.

“I have come to regard England as the most remarkable country in European history.” Simon Jenkins in The Telegraph, 2011. That says it all.

Well, I think he’s perfectly entitled to that opinion. I too love England (although putting them as “most remarkable” may be over egging the pud a bit – something French, Italian and Spanish cuisine solves 😉) Despite our shared love of England, I cannot see why that would give them the right of hegemonic control over any other nations. Espousing the cultural merits and record of one’s nation is fine, but not whilst also backing a system such as the current UK. That is just a legitimisation of overlordship. Digon yw digon, rhyddid nawr. Cymru am byth, get used to… Read more »

I’ve been rather bitter with my last few comments so this time I’ll just say I derive comfort from knowing that M Macron understands that England is not Britain.

Given the relative standard of world leaders at the moment, that surprised me as much as comforted me! At least the laughable former president of the US has been replaced by a sharp, charismatic, compet… We’re doomed.

France, Germany, Spain and Italy had to go through some of the worst wars, purges, revolutions and tyranny in the 19th and 20th centuries “to merge the loyalties of their diverse tribes”. Is that what’s being suggested here? Or does it stand to reason that a peaceful, mutually benefitial national divorce should occur instead?

Surely, the more pertinent European analogies are the multi national empires of the 19th century. Why has it taken so long for the most aggressively centralising empire – British – to go the way of the Hapsburg, Russian, Ottoman or German empires? The breakdown of those empires has freed a host of European nations with far less historic claim to nationhood than Scotland or Wales.

The other European empires lost wars which ultimately weakened and undermined the case for those empires to even exist. As yet the English empire hasn’t lost any major wars.

There is no Celtic virus just the end of the English empire and it’s long overdue. No more plundering of our natural resources, no more neglect and no more targeting of Welsh culture and language. It ends, we’ll finally be free.

There is an English Imperialist virus though.

We should learn not to react to Simon Jenkins’ piffle. He never fails in the Guardian to draw out the anti-Celtic tropes. He is a plant and we should ignore him. Why waste our breath on him when there is so much capacity building to be done at home?

CJPh
Reply to  Mandi A

Simon Jenkins has a long track record of being anti-Welsh, he must have some deep rooted issues about Wales, its culture and language. What is remarkable is that he thinks he is qualified to pass judgement while knowing little.

I have no understanding as to his deep rooted bias but was his father Daniel Thomas Jenkins (merthyr born)?

Another person that’s going to write a propaganda scenario about that they know nowt about, we are neither Celts or Welsh we are Khumry according to ancient text, the Celt tag was introduced in about 1714 to give a new identity and also exalt the Anglo-Jute -Saxon brigade, it also led to the treachery of what was known as the Blue Books, to propagandise and assimilate (the todays spelling Cymru) into their field of a Walt Disney scenario, it’s ironic that a “Welsh” man was known as Asser, or properly Geraint Y Fardd Glas, along with John of Scotia, John… Read more »