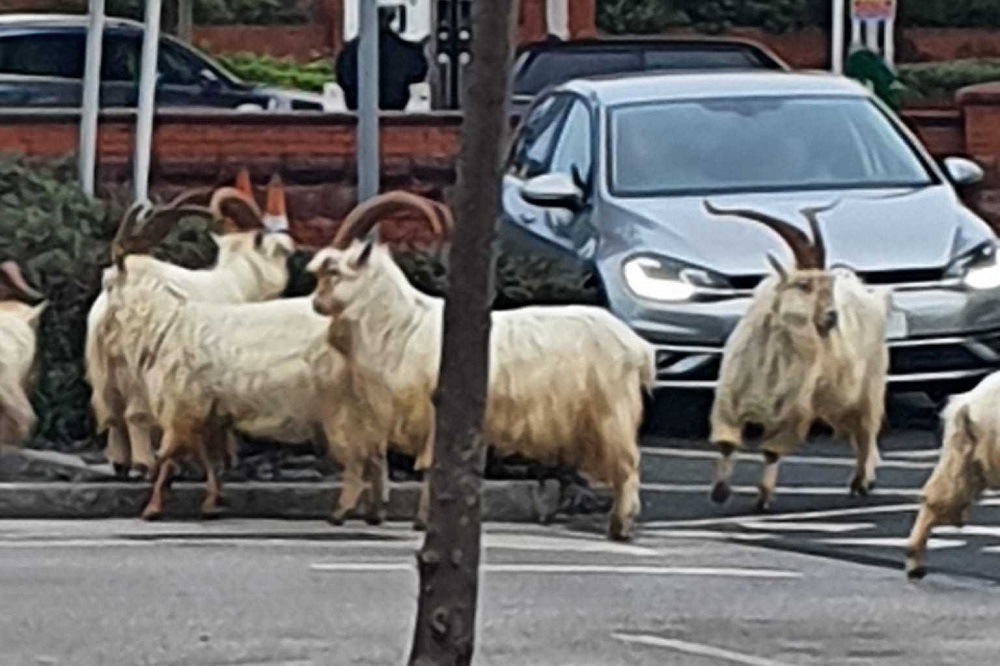 The Great Orme goats stopped traffic getting in and out of Llandudno’s Asda car park this morning.

A herd of around a dozen animals watched as two angry bucks locked horns at the traffic lights, stopping cars entering Asda from Conway Road or leaving the supermarket.

Furious drivers beeped their horns attempting to scare off the goats, but they were too busy scrapping or watching the fight to move.

Goats butt heads to establish their dominance or their place in the herd.

Mum Michelle Evans, a nurse, was driving to the supermarket when she had to pull up and wait for the animals to move on.

“There were two goats fighting at the traffic lights by Asda,” she said.

“They were having a right scrap and making a heck of a noise. It sounded like one was hurt. But they wouldn’t give up. They were really going at it.

“The two goats fighting had their horns locked while the rest of the herd was just watching.

“People were beeping their horns because they couldn’t get in or out of Asda. In the end, people just drove around them. You don’t expect to see that when you go to pick up your shopping!”

Shopper Claire Gaines from Penrhyn Bay added: “There were about ten goats stopping cars getting in and out of the car park.

“The drivers were getting frustrated.”

The matter was reported to Conwy County Council.

A spokeswoman for the council said: “The council acts in the interests of the goats’ welfare when they are on our land. We are not responsible for any damage they may cause, and we cannot become involved in removing goats from private property.”

The Kashmiri goats were originally a gift to Lord Mostyn from Queen Victoria and have roamed in a wild state for about 100 years.

Although once in the ownership of Lord Mostyn, they are now regarded as wild animals, and no one is legally responsible for them.

The goats shot to international fame when they took to the deserted streets of Llandudno during the height of the pandemic in 2020.

Two angry bucks? Have they sent their CV’s in to 10 Downing Street yet? Surely they must be contenders. Thought I was reading about Guto Harri and Cummings.

Yobs!
They all probably headed off to the nearest Wetherspoons after this.
How much in benefits are they claiming?