A south Wales railway tunnel that has been disused since the 1960s will remain closed for the foreseeable future.

The Gelli Houses Railway Tunnel in Cymmer has a long history; built in 1882 as part of the Rhondda and Swansea Bay Railway, with the first train passing through it on July 2, 1890.

The horseshoe-shaped tunnel was used by trains until the closure of the railway in June 1960.

In February 2021, Neath Port Talbot Councill received a request for filming in the tunnel and it came to light that it had no records regarding the site.

As it is situated within land now owned by the council and vested with Streetcare Services, the group requested a general inspection of the structure, where a report later found it was unsafe for public access as sections of it had collapsed.

As a result of the findings, the application for filming was declined and an emergency closure was put in place to prevent access for public safety.

A number of options were considered with regards to the future of the site, with proposals to collapse the tunnel, or to refurbish it for re-opening to the public discussed.

Following recommendations, members of the Environment, Regeneration and Streetscene Services Cabinet voted for the continued closure of the tunnel via palisade fencing at each end.

Although the tunnel is considered to be a ‘heritage’ feature for the Neath Port Talbot area, it is not a listed structure.

A feasibility study for future use of the tunnel may now be carried out with options brought before the committee within the next 12 months to determine a way forward for the structure.

Readers may like to know that this tunnel has a unique history. The R&SB engineer was Sidney William Yockney, a pupil of Brunel’s. He took on the task of building the line after many others had declared the idea of a Swansea – Rhondda railway line impossible. The tunnel is just under two miles long. Tunnel building requires “headings” to be set at different places within the obstacle to be tunnelled; this was not possible due to the height of the mountain, thus only two headings were cut, one from the Rhondda and one from the Afan valley. When the… Read more »

This article relates to the smaller Gelli tunnel.,not the the Rhondda tunnel at Blae gwynfi. Right opposite the Gelli houses. It’s a very very short tunnel. Just south west of it is the seven arches viaduct.

This tunnel is not as bad as described, I have been through many many times and only a small amount of damage is there, and the tunnel is no a deep tunnel holding up a mountain of weight. The damage has also been like it is for over 20 years without change. 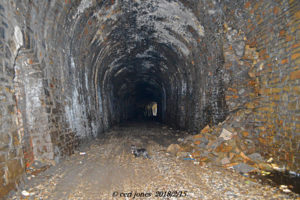 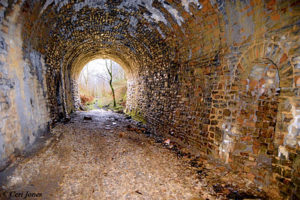 Inside the tunnel number 2 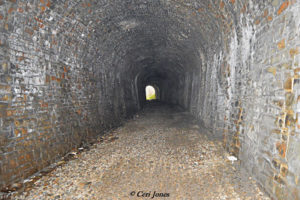