The average house price in Wales increased by almost 12% this year with a typical property now costing £224,000.

House prices in England jumped by 13% with Scotland recording an increase of 8.5% over the year.

Private rental prices in Wales also rose with tenants now paying on average over 3% more than the year previous.

Rental prices across the UK have now reported their strongest rise in six years. 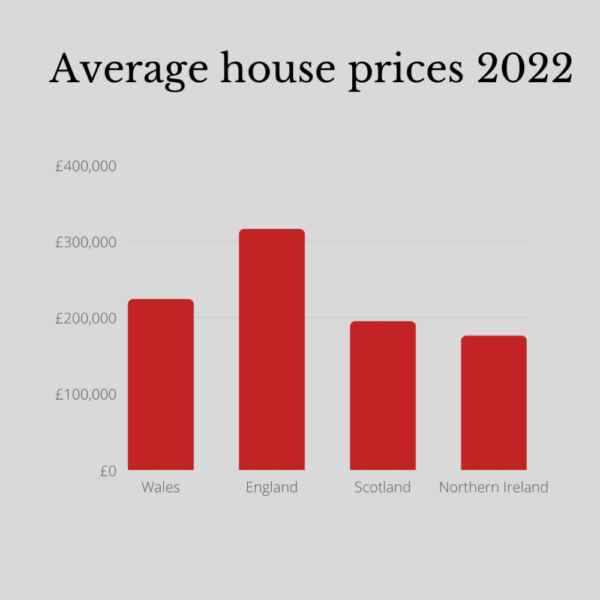 Aimee North, ONS head of housing market indices, said: “Annual house price inflation increased in October, although this was mainly because of the sharp fall in house prices at the same time last year following the end of the stamp duty holiday.

The figures were released by the Office for National Statistics amid signs that sharp rises in living costs may have passed a peak.

Mark Harris, chief executive of mortgage broker SPF Private Clients, said: “Inflation slipping to 10.7% will start to ease pressure on the Bank of England but a half-point increase in base rate this month is still expected.

“That said, the pricing of fixed-rate mortgages continues to ease, with five-year fixes now dipping below 4.5%.

Stretched household finances, rising interest rates and a likely recession means a decline in house prices does look likely over the coming months

Tom Bill, head of UK residential research at Knight Frank, said: “Despite today’s figures, double-digit UK house price growth is now a thing of the past.

“Even as the reverberations of the mini-budget fade, a more adverse lending landscape is emerging after 13 years of ultra-low rates.

“When the spring market gets under way next March, mortgage rates will be more than two percentage points higher than at the same point in 2022.”

Your opening statements are misleading.