A human shield will be formed around the Senedd building on Sunday to protest the EU Withdrawal Bill.

The protest will take place in Cardiff Bay at 12pm this Sunday, September 17.

First Minister Carwyn Jones, alongside Scotland’s FM Nicola Sturgeon, has condemned the bill as a “naked power grab” and “an attack on the founding principles of devolution”.

The bill means that EU powers in already devolved areas will be transferred to Westminster, rather than to the Welsh and Scottish parliaments, after Brexit.

The UK Government has said that the arrangement will be temporary, but Carwyn Jones and Nicola Sturgeon have argued that it an attempt to pilfer powers by stealth.

Yes Cymru, who are organising the protest, said that while many supporters of devolution voted for Brexit, it was being “used as a Trojan Horse by the Tories to salami slice powers from Wales”.

“It’s time that we follow the example of the people of Catalonia who are marching for their rights.” 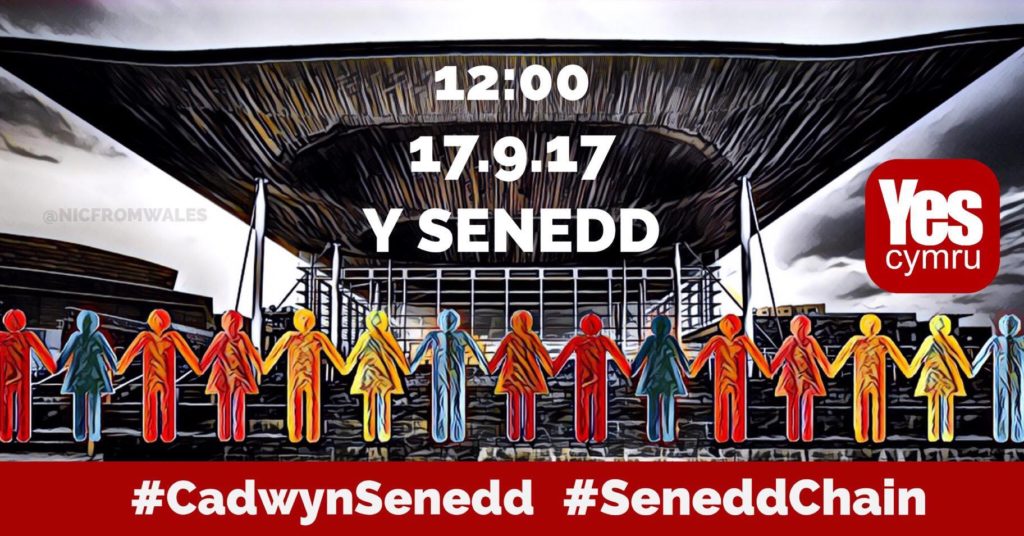 Explain please what powers are sledged to be going from The Senedd to Westminster?

For example, Agriculture is a devolved issue. Since we are leaving the EU then those powers now resident at EU level and pertaining to Agriculture should be going to Wales and Scotland since Agriculture is devolved. But the transferring of EU Agriculture powers to Westminster is viewed a power grab. Which in principle is quite correct. Not often I agree with Mr Jones but he’s right on this one.

So it’s a power grab by Westminster from Brussels?

It’s hardly a threat to devolution which is what Plaid/The SNP are implying.

Also if this is a grab by London from Brussels what will a human sheld around the Senddd achieve exactly?

You’re not paying attention. It’s a power grab pertaining to areas which are already devolved. If they aren’t at the EU level, then they should be at the Senedd level.

I totally agree that powers won back from Brussels should be shared among the nations and not concentrated in London. But I do find it a bit hypocritical of this protest to claim that it is NOT okay for London to have these powers while it WAS okay for Brussels to have them. Getting powers from Brussels to London is power moving in the right direction. It will be possible get those powers devolved from London to Cardiff and Edinburgh. It is virtually impossible to get them from Brussels. The undemocratic EU only extends its power, never relinquishes. Which is… Read more »

Glasiad – under EU Wales had control over agriculture. Welsh ministers actually represented Wales in meetings. With Brexit, it’s very likely that Westminster will take agriculture away from the Assembly. So, no agri department in the assembly. The agri civil servants who work in Aberystwyth will not be needed as their job will be done in Whitehall. We, of course will still trade with EU – 90% of Welsh meat goes to EU, so we’ll have to follow all the rules but now 1. we won’t have a distinct Welsh voice there nor 2. will Welsh farmers have a designated… Read more »

An excellent analysis from Sionyn

Careful! While politicians in London may be unsympathetic or uninterested in the idea of (say) Wales having exclusive fishing rights over water in the Irish Sea and Bristol Channel they may be very happy indeed if Cardiff Bay were (say) to take responsibility for payment of agricultural subsidies and dealing with farmers’ protests should there be a return to the agrarian militancy of the past Why this protest now? What we’ve been told, is that powers will first be transferred to London then devolved on. That is because it the UK that is leaving the EU and there’s no mechanism… Read more »

Tame – this isn’t a Labour protest. It’s a YesCymru one. It’s about making sure MPs know that a mass movement is being slowly formed to bring issues of who has the power and the probability of a Westminster power grab to the fore. It’ll be too late in a few years time. You may have noticed how the Tories (with Welsh Labour MPs help) watered down, gutted the Wales Bill from what was meant to be the implementation of the Silk Report (and Richard Report before that). Do you seriously think that Westminster will wilfully devolved agriculture back to… Read more »

“…..keep Wales a vassal state…” ? Surely you mean “colony”. Everything going on around us is consistent with a colonial system. While England ( or white/whiteish England ) rails against influx of foreigners onto its turf, Anglos pour into Cymru and insist that natives use their language with only rare examples of Anglos bothering to learn or even respect the use of Cymraeg. Linked to this is the disruption of the property market pricing homes out of the reach of aspiring natives. Businesses are reduced to a dependency state relying on grants and other state handouts – this creates a… Read more »

Typical bickering Welsh! Naa-naa-naa-naanot one of you have asked how it went on Sunday ffs! Actually, it was rather brilliant and got the ‘out for a Sunday stroll’ promenaders stopping, talking, asking questions and generally getting stuff off their chests! The ones I talked to went home with our website address with the intention of looking YesCymru up! And, I got to meet Iestyn ap Rhobert in person. (Lovely Boy!). However, the (real) highlight was meeting other true patriots willing not just to stand up for Cymru, but to link arms to defend her! Diolch yn fawr iawn to everyone… Read more »