Huw Edwards has said that he was asked to take off his mask by an “angry man” on the tube – because it had a red dragon on it.

The Welsh broadcaster said that he would continue to wear his mask, after Boris Johnson announced that face masks will only be “encouraged” in England from Monday.

Mark Drakeford is due to make a statement tomorrow setting out further details on the new alert level zero for Wales, including wtherer masks will be mandatory in other settings.

Huw Edwards posted on social media: “Angry man on tube demands I take off mask. Turns out he was offended by the Welsh theme…

“Anyway. I’m still going to wear a mask on public transport and indoor spaces — to protect others and show respect for NHS staff. Diolch.”

Angry man on tube demands I take off mask. Turns out he was offended by the Welsh theme… 🏴󠁧󠁢󠁷󠁬󠁳󠁿 Anyway. I’m still going to wear a mask on public transport and indoor spaces — to protect others and show respect for NHS staff. Diolch. 🙏🏻 @robertwilson9 📸 pic.twitter.com/1Giul86tXP

The Welsh Government have said that “active further consideration” is being given to whether masks will still be required by law in other settings, like retail.

Speaking in plenary today, the First Minister said that a decision on face masks would be made tomorrow and that the added that the danger of long-Covid was one reason why they were being more cautious than England in lifting restrictions.

“It’s one of our reasons for hesitation in the current circumstances because while the link between falling ill and hospitalisation has undoubtedly been amended by vaccination, large numbers of people falling ill in the community is not to be dismissed as though that wasn’t a matter of continuing concern,” he said.

“Because the more people who fall ill in the community, the greater the risk there will be that some of those people too will then suffer not just a temporary or minor illness, but an illness that will live with them for weeks and months beyond.”

Be strong and of good courage Mr Drakeford you have a nation to protect!

You take care Huw there are some nutters out there…

An EU one would also go down well. Or maybe a BLM ONE, Italian one or rainbow one?

I’ve just come back from London this evening and I wish I’d had a dragon mask (I have got an EU one). I was using my spectacular doves of hope mask available from The Radical Tea Towel Company, they do cool Aneurin Bevan, Rebecca Riots, Merthyr Rising and Owain Glyndwr tea towels etc. I just bought a couple of YesCymru masks Steve.

Anybody spot I was wearing it upside down? 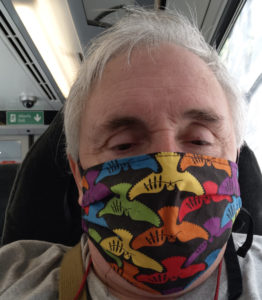 Anyone else see a flock of bats!

Now that you mention it…

I see whale tails!!!! So you could see it is a mask covered in Whales!

I have to admit that the doves of hope mask is very fetching.

“Angry man on the tube” – England’s answer to “natives speaking Welsh in the pub” . More one hears the more pathetic they appear. Give them time and they will incinerate themselves with all the heat their hatred generates.

The jerk on the tube displayed the same attitude as the middle aged men in England shirts rioting outside Wembley. Just imagine the screeching BBC if Wales fans had injured police officers.

Where did you get the mask, Huw? I want to buy it!

But he’s been wearing it!