The Welsh Secretary has said that the does not “totally disagree with the devolution concept.”

However, Simon Hart has challenged the idea that Wales’ democratically elected First Minister, Mark Drakeford, should have more of a say over Welsh laws.

In an interview with Theo Davies-Lewis for The National, in which he criticised the Welsh Government, he said: “The mistake they’re making, I repeat it, is assuming that home rule means Mark Drakeford’s rule.”

Hart has defended the UK Government’s move to take away powers over funding from the Senedd and the Welsh Government and centralise them in London. He also denied that this was “stealing” powers from Wales, saying it was “profoundly wrong”.

According to the Welsh Secretary people are “going to see a much more active UK Government in Wales than you’ve ever seen before… I believe that not only to be the case but also to be right”.

In order to justify Westminster bypassing the Senedd, he pointed to the Oxford English Dictionary definition of devolution.

He said: “If you look up the Oxford English Dictionary, ‘devolution’ will tell you that it’s decision making at the nearest point to those who it affects. For us, that’s local authorities. It’s quite interesting. ‘This is devolution on my terms,’ Mark Drakeford would say. And: ‘I want to be a unionist but on my terms’. I’m saying: nuh-uh.”

He added: “There has been too much emphasis in public debate on the union being just an argument about money. And I think it’s very easy to misinterpret that.

“It’s very easy… to create a narrative which almost looks like it’s an uneven partnership, whereas in reality the union is much more of an emotive argument. It’s much more of a cultural argument and cultural discussion.”

If, as Simon Hart would like to imply, the Union is not about economic equality, on which it has failed Wales so spectacularly, but is more about culture, then I have to say the attitude in Whitehall and England towards the Welsh culture destroys that argument.
Enforcing the Union Jack and colonisation of Welsh speaking areas by monoglot English second home owners hardly shows respect for the culture or people of Wales.

First, quibbling over definitions is something we all learnt to do as under-grads, egotistically looking to win arguments of words while ignoring mutually agreeable practical solutions.

Does he mean that county councils are now able to pass their own legislation?

Second, a cap of eight million for a freeport out of a £175m budget doesn’t suggest equitable or even activity.

Third, there’s a simple solution to the emotional and cultural issue.

What a House of Cards they are! When are we going to give them their marching orders? We have carried them since the fifteenth century. Enough is enough.

Hart is an imposed governor General. His job is redundant and he is a disgrace, owing his allegiance to another country and an alien mindset.

Simon Hart fails to grasp that the performance of successive Westminster administrations have caused profound alienation of many people of which I’m one.
i have a feeling that this man seeks only to increase his own importance in Westminster rather than act for the people of Wales.

He’s happy with devolution, just as long it’s the tory/westminster version of devolution,
and oddly enough, exactly why going down the federal route won’t work

According to Hart it’s “It’s very easy… to create a narrative “. Don’t we all know it, we’ve lived with Tory narrative for years.

Sadly, not everyone takes Simon Hart as seriously as he takes himself. 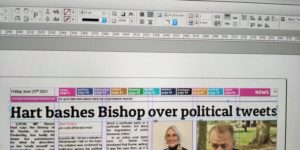 “The mistake they’re making, I repeat it, is assuming that home rule means Mark Drakeford’s rule.”

Does Mr Hart conveniently forget that we, the people of Wales, voted democratically for Mark Drakeford to be our leader?

﻿ The majority in Wales did not vote for the Conservative party.

Oh dear, those of us old enough to remember the 1980s certainly know what this means…….

Oh how very generous of the Viceroy of Wales. It doesn’t matter if this prick agrees with the concept of devolution. WE voted for it. Always hypocritical Toaridhe who feel that THEY get to pick and choose which referendums are to be respected. We need to extricate ourselves from this gang of thieving Hustlers PDQ!

I voted for devolution back in day and now I would for independence and in the future vote to rejoin the EU. I would vote for anything. XXXX

Westminster has had years to put things right and invest more in Cymru and has failed dismally. Now the threat of independence is real it’s trying to change it’s tune but it’s too late, you abuse us we’ll leave you , it’s as simple as that.