Is privatisation the answer to Cardiff Airport’s problems?

Cardiff Airport lost the same number of international routes during its last decade in private ownership as it did during its first decade in public hands, research by Nation.Cymru has found.

Wizz Air’s announcement that it will permanently end its operations at Cardiff from today has sparked calls to re-privatisation of the airport bought by the Welsh Government in 2013.

But an analysis of Civil Aviation Authority data shows there have been similar results under both models of ownership.

Between 2003 and 2012, Cardiff Airport lost 28 international routes carrying 1,000 passengers per year or more.

Exactly the same number of equivalent routes were lost between 2013 and 2022.

Cardiff Airport has faced severe turbulence under both public and private ownership.

Back in 2003, Cardiff Airport was in the ascendency.

Connections to European hub airports Amsterdam and Paris were performing well, ‘bucket and spade’ destinations like Alicante, Malaga and Palma de Mallorca were attracting passengers in the hundreds of thousands, and there were direct flights to destinations as far away as Sanford in the United States and Toronto in Canada.

Prague, Barcelona, and Sharm El-Sheikh were among 15 popular new routes added over the next four years as Cardiff Airport was carried along by strong economic growth.

Flybe and Bmibaby both began operations and a record 2 million passengers used the airport in 2007.

Then the financial crisis hit and, by 2012, passenger numbers had been cut by almost half.

Cardiff Airport then began a slow climb back towards its previous heights in 2013, the year it was bought by the Welsh Government.

Passenger numbers increased from 1 million in 2012 to 1.6 million by 2019, coinciding with a rise in the number of routes from 35 to 42 over the same period.

The new routes included Cardiff’s first ever scheduled long-haul flight, to Doha, which almost doubled its number of users in its first year of operation.

Just as the financial crisis clipped Cardiff’s wings when it was privately owned, so the pandemic disrupted progress under public ownership.

Regular direct flights to European cities popular for weekend breaks, like Rome and Berlin, as well as Cardiff’s connection to the Middle East all fell victim to Covid-19.

Passenger numbers in Cardiff were down 44% in 2021 compared to the previous year, substantially higher than losses suffered by regional competitors: Bristol (-5%), East Midlands (-8%) or Birmingham (-14%).

Passenger numbers have begun to recover, with 830,000 people using the airport on 31 routes between January and November of 2022. 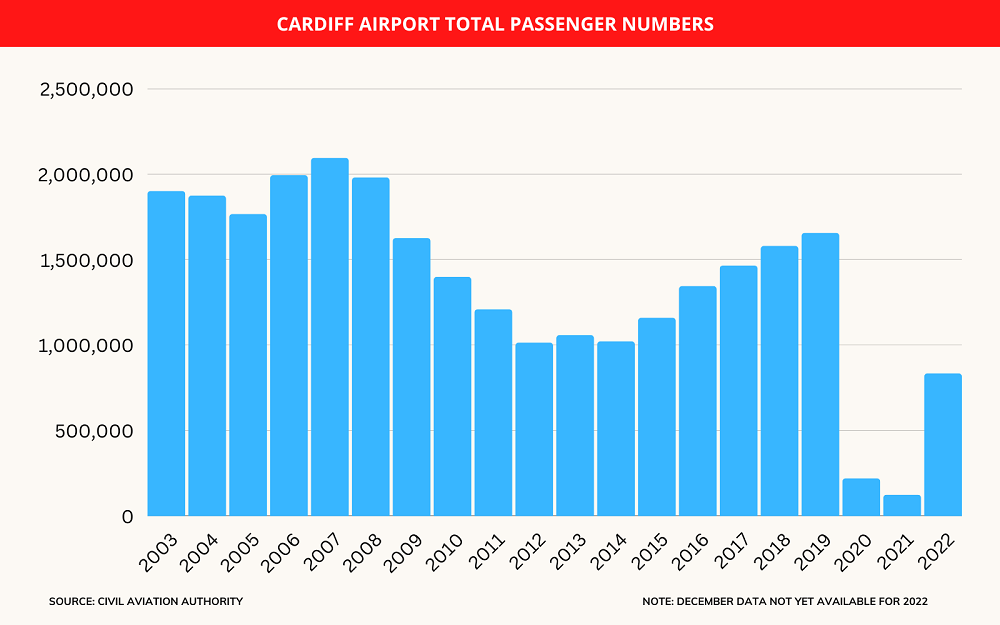 Wizz Air’s announcement risks halting progress. It means Cardiff will lose a further two routes, to Milan and Bucharest, completely while also losing capacity on a further nine popular destinations which will continue to be served by direct flights.

What hasn’t improved since renationalisation, even before Covid, are the numbers on the airport’s balance sheet.

The airport has made a pre-tax loss every year since 2013, according to Senedd Research, and the Airport’s chief executive has admitted making a profit remains a “long way off.”

Both the Welsh Conservatives and Welsh Liberal Democrats have called for the airport to be re-privatised.

“I really want to see it flourish in private hands but instead it languishes in the ownership of the Labour Government who is flying the airport off the runway into terminal decline,” said Welsh Conservative shadow transport minister, Natasha Asghar MS.

“We can see this most clearly when looking at passenger numbers at Cardiff which are down 44% on pre-pandemic levels when Bristol Airport is down just 5%.”

Welsh Liberal Democrat Leader Jane Dodds said: “Serious questions now need to be answered about Labour’s strategy for the future of the Airport. With a bill of £210 million since the Welsh Government purchased the Airport and no sign of things improving, taxpayers will rightly be asking what value for money they are getting.

“The Welsh Liberal Democrats led the charge against the purchase of the Airport from the private sector in 2013 and we have continued to be vindicated since.”

But the Welsh Government have insisted they won’t “cut their losses and run” following the latest setback, a decision which is supported by Welsh transport expert Professor Stuart Cole

When asked by Nation.Cymru for his advice to the government, Cole replied: “They should continue to fund it .”

Cardiff can’t compete with Bristol on a commercial basis but still provides an important service for the people of south Wales and the Welsh economy, according to Professor Cole, emeritus professor of transport at the University of South Wales.

He said: “The wrong decisions were made twenty odd years ago when EasyJet and Ryanair came on to the market. But it has some good airlines and some good connections.

“Cardiff Airport is also a symbol. It’s a symbol that, in terms of international investment, Wales is open for business.

This is the here and now. Electric air-flight is donkeys years away and like it or not, people want to travel.
Perhaps your understandable concerns about the environment might better be addressed at solving the pollution caused by the internal combustion engine.
Looked at the M4 lately?

On the ‘ ball ⚽️’ ( no pun intended) John as usual. The ‘ regional ‘ Gvts across Europe have a fair track record in supporting ‘ regional’ airports. From Italy to Istria or Belgium to Berlin – city or state governments have used their efforts to this end. The great Manchester Airport owes its success to the partnership of local authorities who initiated its development from Ringway Airdrome.

The answer is not necessarily privatisation. I have to use Bristol for two simple reasons. The first is obviously choice, clearly shared with many of my compatriots judging by the number of Welsh registered cars in the car park and accents in the terminal. The second is cost. Even allowing for the costs of travelling to Bristol, a recent journey by KLM to Helsinki was £400 cheaper; even hopping by KLM (the only remaining regular airline) to Amsterdam from Cardiff is £100 more expensive than Bristol. This raises two questions about the management of Cardiff Airport. The first is why… Read more »

My guess is there is a major difference in catchment areas. Cardiff has 180 degrees of land around it with poor road connections while Bristol has more like 270 degrees and a far more affluent potential customer base within a reasonable distance. The roads to Lulsgate are not perfect, however, there are more options for access.

I too was once a critic of road access, but now I have 3 road connections into Cardiff, a motorway based route, an A road based one and a B road based one.
The Bonvilston road is far nicer now it’s been dualled and lit.

From my house, it’s just over 1 hour to get to the airport on any of those 3 ways. Bristol takes me well over 2 hours, and that’s using the A369/A370/new link road/A38, which is my easiest route (no country lanes any more for me thanks).

I think it probably depends on which side of the Brynglas Tunnels one lives. Sure, if one is fairly local to an airport you will know of a variety of routes to avoid jams, however, the airline, tour operators and aircraft operators are clearly not convinced of the potential market for Cardiff flights. If they were, there would be a greater range of regular destinations and past history of operators suggests they are right to be cautious. Cheap air travel has one major disadvantage; aircraft operators have to fly with virtually every seat occupied to be profitable. Therefor they will… Read more »

I’ve been thinking about my contribution to this issue and ask – through Nation Cymru – for an answer from the management of Cardiff Airport. Aer Lingus provides a unique service. Travellers to the US who use the airline and Dublin Airport can clear US customs and security there, thus being relieved of long and frustrating queues upon arrival in the US. This service is supported by linking Aer Lingus flights from airports in the UK; every airport in the UK – even minnows like Exeter – offer this service. The only one that does not is Cardiff. Can we… Read more »

Hello John I really appreciate you’re contributions on this subject,At one time Are Lingus did offer The Pre USA immigration clearance for Cardiff to Dublin as I can well remember this being advertised on Nation Radio. To broaden this a little bit you mention Exeter Airport and as you probably know there will soon be a service from Swansea to Exeter. This was also covered by NC and the comments section was met with some scepticism. I pointed out at the time that there are 29 destinations available from Exeter compared to just 17 from Cardiff. I am by no… Read more »

Ryanair operate a Cardiff – Dublin service, but its a point to point service. I agree though Aer Lingus would be better.

This was an interesting debate and I note that the management of Cardiff Airport is silent.

I ask again – why is Cardiff the only airport in the entire UK that des not offer the Aer Lingus link service?

Most major airlines operate around a hub: Aer Lingus – Dublin KLM – Amsterdam Schiphol Air France – Paris Charles de Gaulle Lufthansa – Frankfurt Iberia – Madrid American – Dallas/Fort Worth, Philadelphia United – Chicago O’Hare, Newark Delta – Atlanta, New York JFK etc etc British Airways used to operate from Cardiff in the 90s to European hubs, but this was not viable because their hub is Heathrow & the destinations offered were hubs of competitor airlines. Airlines such as BMI Baby, Wizz Air etc were point-to-point airlines & did not offer interline services. Which meant you would have… Read more »

Surely private companies won’t touch Cardiff Airport until APD is devolved.
It may well be a last throw of the dice, but it needs to be tried.
Or does Natasha know something the rest of us don’t? Has she a list of airlines gagging to invest if only the airport was privately owned?

Even David TC Davies came out in favour of APD devolution, & once vowed to fight for it. He is now Welsh Secretary.

Wales needs an airport. But keep the assembley as far away from it as possible. I can’t think of anything that they have touched being successful.
the best they can do is build some more roads and infrastructure . But they won’t.

Hear me out here. The issue with privatisation is it runs the risk closure, even after 6 months of ownership. I don’t know the legalities but is it not possible for Welsh Gov to sell a share of the airport allowing for fresh investment. In return gov could promise to add a railway spur and new station at the airport. Of course there’s probably a lengthy battle with network rail, but they’ve managed to acquire the valley lines so why not the vale line? I certainly think the catchment area is there as plenty are willing to travel to Bristol… Read more »

Catchment areas can work both ways. If people can travel from South Wales to Bristol, then why can’t people from West of England use Cardiff?