There was a time when the world had two Welsh speaking Prime Ministers.

British PM David Lloyd George had a companion on the world stage in the form of Billy Hughes, Australia’s then Prime Minister who was raised in Llandudno.

It is exactly a century since Hughes, known affectionately Down Under as The Little Digger, paid his final pilgrimage to his boyhood home, Bryn Rosa, in Abbey Road, Llandudno, on August 27, 1921.

During that visit he also unveiled the statue of Lloyd George that still dominates the Maes in Caernarfon.

Hughes was born in London of Welsh parents in 1862 but at the aged of seven he was sent to live with his Aunt Mary in Llandudno after his mother died.

In 1884 at the age of 22 he made the life-changing decision to emigrate to Australia where he initially worked as a labourer and became a trade union organiser, before being elected to the New South Wales Parliament a decade later.

After the formation of the Australian Federation in 1901, he was elected as Australia’s PM in 1915 and was at the helm until 1923.

In 1916, he returned to Britain as part of the UK war cabinet where he and Lloyd George would speak together in Welsh.

His nickname, The Little Digger, referred to his wartime leadership and he used to take the salute at the annual Anzac Day parade in Sydney, wearing the distinctive Australian soldier’s slouch hat given to him by the Gallipoli veterans.

As he got older, a chair was provided for him by the Commonwealth Bank of Australia. After his death in 1952, the chair was still brought out and his hat hung over the back adorned with a sprig of rosemary.

The custom continued until 1974, when the area was pedestrianised. His hat is preserved in the bank’s vaults and a plaque has been placed on the bank wall to commemorate the ceremony.

He was commemorated by being featured on an Australian postage stamp in 1972.

While Hughes is best known for leading Australia during World War 1, his influence on domestic politics spanned several decades.

He was a member of the federal parliament from 1901 until his death in 1952, the only person to have served more than 50 years.

During his career, he represented six political parties, leading five, outlasting four and being expelled from three.

He’s generally acknowledged as one of the most influential Australian politicians of the 20th century.

Hughes was a controversial figure throughout his lifetime and his legacy is still debated by historian. His strong views and abrasive manner frequently made him political enemies, often from within his own parties.

Former colleagues in the Australian Labor party considered him a traitor and conservatives were deeply suspicious of his socialist economic policies but he was extremely popular with the Australian public, especially ex-servicemen.

Welsh roots also shaped the politics of Australia’s first female Prime Minister who had the top job between 2010 and 2013.

Born in Barry, Julia Gillard and her family emigrated when she was four, but stories about her later father’s early life in the Neath Valley stayed with her “in politics and beyond”.

No doubt the South of Wales assembly will want to honour these men in Cardiff!

From ‘The Times’. Billy was a leading light in the formation of Australian Rugby League from his base in the working-class area of Sydney. Also, something of a ‘boyo’ it is fair to say. 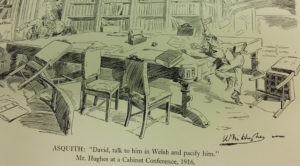