National Farmers Union in Wales has warned that rural farming communities in Wales could be “decimated” if plans for blanket afforestation go ahead.

The warning comes amid large scale government plans to plant millions of trees across the country to create a new national forest which stretches from the north to the south of Wales.

However, with a number of large Welsh farms being sold to investment firms who plan to use the land to offset carbon emissions, there is growing concern in local communities.

Frongoch Farm in the Carmarthenshire village of Cwrt-y-Cadno was sold earlier this year to Foresight Group which is a multi-billion-pound private equity firm based in The Shard.

A group of locals from Cwrt-y-Cadno, led by John Llewellyn, told Sky News that they are concerned that the afforestation will be largely made up of conifers and that could have a negative impact on the landscape and soil quality.

Mr Llewellyn said: “This area is threatened by a slow black blanket of fir trees. Our concern is an afforestation proposal has been agreed and a non-native company, with a non-native adviser and a non-native agent, is coming in to plant trees which we think are the wrong trees, in the wrong place for the wrong reason.”

Frongoch Farm was sold by farmer John Thomas whose family worked and lived there for nearly 70 years, and when he retired three years ago, he hoped the new owners would safeguard it for future generations of farmers.

Last year, however, it was resold at auction, in excess of the guide price to The Foresight Group, which owns three other large Welsh farms.

John Davies, NFU Cymru president said: “There is a great deal of concern because family farms are the backbone of our rural communities in Wales and if you see this happening, that removes those families from those areas, and it removes those job opportunities for 30, 40 years.

“What we want to see is the forestry approach integrated into farming here. This isn’t an option of trees good, cows bad, this is about fully integrating our woodland approach into our agricultural going forward.

“If you’re seeing a monoculture approach to this and blanket afforestation – that’s a fundamental change and that’s not what we’re looking for in Wales. It’s decimation of that community really, isn’t it?”

In December, Barmouth farmer, Cllr Gethin Glyn Williams, called on the Welsh Government to amend the the guidelines of agricultural funding schemes and ensure that taxpayers’ public money does not leave Wales as huge firms try to offset their carbon footprint.

His motion, which was unanimously backed by fellow councillors, followed similar calls from farming unions amid concerns that family farms are being snapped up at an “alarming rate,” to the detriment of Welsh language and culture.

He said: “Over the centuries the lands and resources of Wales have been used for extraction of all manner of commodities for the benefit of others.

“The latest ‘commodity‘ being seized upon from our landscape is the potential in carbon, as investment companies from outside Wales are purchasing farms, gaining large Glastir Woodland Creation (GWC) grants and using the land for afforestation to offset their carbon emissions.”

The Welsh Government said it will launch a consultation on its National Forest plan after last year launching plans to create a National Forest for Wales, which was designed to increase the number of trees being planted every year to improve air quality and reduce greenhouse gases.

Deputy Minister for Climate Change Lee Waters said: “We need to plant 86 million trees by the end of this decade if we are to meet ‘net zero’ carbon emissions by 2050.

“Properly managed this also offers a considerable opportunity to the rural economy to create green jobs and skills in harvesting timber for high value goods.

“We are keen to avoid outside interests buying up land and we want to work with Welsh farmers and landowners to achieve this.”

In a statement Foresight said: “We will be planting a diverse species mix at Frongoch comprising over 25% non-commercial broadleaves. Foresight never plants trees on land that can support productive, commercial food crop growth.

“A key part of our approach to afforestation is always to consult and work with local communities before any planting begins.”

There is a solution. The FUW, the NFU and the CLA could adopt a new and radical policy.
In future all owners of land and property in Wales shall henceforth be advised only to sell to those purchasers that are Welsh. They may not receive the market price, but it give a powerful signal that the ‘filthy lucre’ is not the only criterion that we use for transactions in Wales.

What a stupid idea. Would you sell your house cheap to a young couple starting out in life? Never works..cash is king. remember a local lady retiring, refused to sell the farm to a neighbouring English couple, who wanted the land, and would have sold the house off. Instead sold to a well known Welsh buisnessman, who then went on to sell off the house and the farm buildings and a few fields.

I am so pleased you agree, Emyr. That is why the NFU/FUW/CLA would not wish to take up my suggestion. It is not in their members’ pecuniary interest to sell to sell below the market price. They accept that the market price is the one that rules- no matter if the purchaser is a pension fund, a hedge fund or a family living locally. You make my point for me. Diolch.

Time for a coordinated campaign to stop Carbon Colonialism

Not just Carbon Colonialism, although I grant you that the Carbon scam is a very fashionable vehicle for corporate spivs right now. Governments need to wake up but are very unlikely to do so. Carbon capture is so morally righteous within that bubble of deluded blinkered fools that they spend little or no time seriously assessing what is contained in investment proposals submitted for handouts. If hand outs are so worthwhile then why not offer them to communities and cap the size of the deal so that large scale institutionally driven proposals are excluded.

Decimation of communities. This means reducing by 10%. How does this compare with farmers reducing the labour they have employed by buying machinery over the last 50 years and then selling the tied cottages off as second homes.

To give some scale to Lee Waters 86 000 000 trees, these red squares each contain 86 million trees at a two-metre spacing (standard spacing for Foresight’s 75% ikea spruce). There’s no room in a square for anything else: no roads, forest roads, rivers, lakes, hedges, houses, fields, picnic sites… Just blanket trees.

His implication is that these are extra to what’s already being harvested and replanted.

I put five in just so that everybody can have a square near their home.

Properly managed or not, 75% is still three quarters of a square. 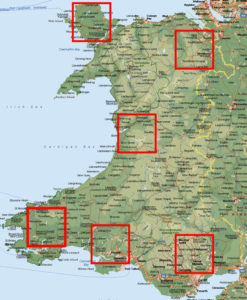 Short term: use planning law to prevent afforestation with other than native species. Also preferable to facilitate gradual expansion of woded areas rather than mass planting.

Medium term. Subsidies for farmers so that shop prices of home grown organic produce match those of imported rubbish.

Longer term. Education and communication infrastructure. Meet the future at least halfway. Better than relying on tourism, especially the self contained holiday parks and zipwires.