A Welsh language campaigner will appear before a court in Aberystwyth today after refusing to pay an English only parking fine received while visiting the seaside village of Llangrannog in Ceredigion.

Toni Schiavone, a former teacher and education officer for the Welsh Government, says that he declined to pay the fine as the penalty notice, and all subsequent correspondence, was in English only.

Mr Schiavone was fined after parking in a car park in Llangrannog which is managed by of One Parking Solutions, which has its headquarters in Worthing in England.

Mr Schiavone says that he contacted the company requesting the penalty notice and further correspondence in Welsh several times, stating that he would then pay the fine.

“In an area as Welsh as Llangrannog why can’t we expect a Welsh language service?” Mr Schiavone said.

“It would be nothing for them to issue a penalty notice in Welsh but they have ignored the request and decided to take me to court. They are the ones causing trouble for themselves.”

He said that this clearly showed the need to extend language measures to include the private sector.

“It’s been more than ten years since the Language Measure was passed, and the Welsh language Standards have made a difference in the public sector – more people can and do use Welsh language services provided by their councils, and so on.

“So when will we see the same change in the private sector?”

To an extent I’m sympathetic but he’s being a prick. He understood the letter that he received, but he’s just being awkward.

I presume that when he gets a ticket from easyJet for his holidays, he’ll refuse to board because the ticket isn’t in Welsh? And he refuses to spend the cash in his pocket because that’s not printed in Welsh either.

But what makes me smile is that every single comment here discussing his plight is in English!! Save your words, he won’t be reading them!

“Save my words, he won’t be reading them”? I’m replying to you not him. He’s spot on. The Welsh language is bigger than some cockneyfied English chancers. No Welsh court CAN find him guilty, or would. Da iawn hogan (THAT is addressed to him)

As they are a company that is based in England, there is no reason to pay this fine….

How do you work that out then?

Do your own homework

OPS has a reputation for being chancers and dodgy, why on earth are OPS being employed by a Welsh council to run one of its car parks?? I hope this fella wins his case and OPS gets thrown out of Wales.

When I got a ticket in a local supermarket some years ago I tried to get in touch with them via a Gwynedd Library computer and it told me I could not be connected because the site was dodgy. So I wrote to them and told them this fact and they dropped the fine immediately…

Russell
Reply to  The Original Mark

i don’t think it’s a public car park that’s been ‘outsourced’. It’s a massive cash cow for the firm though

but it’s not as stupid as giving away Welsh water

Far be it from me to defend Ceredigion Council who have a solid track record of doing very stupid things, but I ***think*** the land is private rather than council owned (not fact checked). There is a field up the road a few 100m which was free last year.

The car park is owned by a person in Swansea. The company from England just manage it.

Da iawn Toni. Happy to donate if needed as I’m sure many others will be ok 👌 to do the same.
As the former Chair of the WLB public sector panel a few years back we came up against these sort of people who thought 💭 the empire was still going . Pob lwc yn y llys 👍🏼

I suspect this is the same car park that had an online payment system that didn’t work because the internet signal was slow or not working at all. So we have a Sais parking company and a Brit Sais comms company running a half baked venture in a most Welsh part of Wales ! Is the local authority or any other sourcing body that lacking in self respect and awareness of how things should be done that they can’t make it a term of contract for such services !

Can I assume that you will (a) have plenty of supporters at court? (b) will have told s4c of date. time etc (c) publicise the name of whoever prosecutes you so no self respecting Cymro/Cymraes will ever use them?
There will be much more of this when the power companies etc start after us

The jist of the argument here is far more important than getting a parking fine in English, It is the fact that a piece of land in the middle of a village on the Ceredigion coast is being monetised by an English corporation and money extracted from Wales again away from the indigenous communit.The protest should be about this fact and I cannot for the life of me understand how that machine is still intact and the land not taken over by the community and us supporting them – this is Rhyfel y Sais Bach once again, but the Cymry… Read more »

It’s not a fine, it is a parking charge. Private companies cannot issue fines because the enforcement of fines is not delegated to the private sector. The court will probably throw it out on that basis alone. These companies are racketeers as they have no interest in enforcing anything, they just want to make money.

No they won’t. Do your homework on this 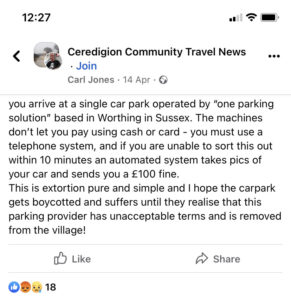 I support Toni Schiavone wholeheartedly. His actions are not done to avoiding paying any fine, it’s because his first language is Welsh and English-based company is operating from within Wales should have bilingual services which denies him not only his human rights but Welsh rights and goes against the Welsh language act, to have correspondence provided in his own language spoken. His ability to speak English is irrelevant. I can swim but it doesn’t mean I should live my life in a pool. But this question needs answering. How and why is this company able to operate withn Wales without… Read more »

Da, was da a ffyddlon

He’s being a fool.

Everyone uses English, my kids speak in English not Welsh.
As others have stated. What’s this chancer going to do if he gets a valuable service like travel documents in English, refuse. ?
Papers sent out in Wales costs twice as much as all paperwork is doubled up in two languages.

It’s the price of aggressive nationalists