A map firm has been accused of “naff bigotry” after it mocked Welsh place names on one of its products.

Marvellous Maps sparked outrage on social media with its Great British Adventure Map that includes a quote from the Blackadder comedy show.

In the programme, the character of Blackadder, played by Rowan Atkinson, claims that people “need half a pint of phlegm in your throat just to pronounce the place names” in Wales.

The Welsh folk singer Gwilym Bowen Rhys has accused the company of “peddling discrimination and xenophobia” by including the quote on the map.

Author Mike Parker, who lives in Ceredigion, said: “How not to do maps, both in terms of naff bigotry and the fact that they’re an absolute eyesore.”

Gareth Huw Davies said: “How do you explain to young children in Welsh medium schools that, no, that other language they are racing to fluency with, is actually a topic of fun, a bit of a joke?”

Paul Sandham said: “In addition to the humourless bigotry, it’s also a particularly good example of everything that constitutes a #shitmap “.

Rhian Medi said: “Interesting that they’re a certified B corporation and still think this kind of bigotry is ok.”

Marvellous Maps says it because a certified B Corporation “as a sign of meeting some fairly stringent social and environmental standards.”

The quote is from a scene in the comedy show in which Blackadder makes disparaging remarks about Wales.

Blackadder asks: “Have you ever been to Wales, Baldrick?”

Baldrick answers: “No, but I’ve often thought I’d like to.”

Blackadder replies: “Well don’t. It’s a ghastly place. Huge gangs of tough, sinewy men roam the Valleys, terrorizing people with their close-harmony singing. You need half a pint of phlegm in your throat just to pronounce the place names. Never ask for directions in Wales, Baldrick. You’ll be washing spit out of your hair for a fortnight.”

Marvellous Maps has been asked for a response.

I had one as a present. Once I saw the comments it went straight into the shredder.

It would be amusing, I think, to take out a full page and in all the English papers, giving a short history lesson … That lesson being the Anglo Saxon law covering the ‘get out of jail’ card for sheep theft. The law that led to rampant sheep sha**ing’ in England. The activity that has morphed over time into ‘blame the other for that which you are guilty.’

Or to be bang up to date, that there were more prosecution by the CPS for the aforementioned offence in England last year than in Cymru …

(There’s something along those lines in the NC Archives on this, I believe.)

They are still at it Sion. Earlier today some man now identifying as a woman was found guilty of sexually assaulting a dog ! I wonder whether he thought that pretending to be a woman would help him get off any charge as he might be declared a touch mad. Wearing a frock while parading around using his penis for assault – how original !

Maybe (s)he thought that in acting a bi(a)tch it might have mitigated the offence, i.e. that the dog consented …

Still, we shouldn’t be making up excuses for more eccentric members of the Anglo-Saxon community …

Wow 😮 So your response to racism is to be Transphobic 🙄 Pot, kettle, black. Enough said! 😠😡

I wonder if they made similar offensive comments about English, Irish and Scottish place names.

Don’t hold your breath, Barry – Well .. in relation to the ‘English’ ones, anyway.

Seems this comes in a suite of maps involving history (mostly English, I guess), literature (English language only, probably) and other Anglocentric models.

I managed to get a higher res image of another part of the map. I suspect, given that their website uses biscuits, sorry cookies, that they take the p*ss out of all of Britain. I would like to see their other quotes.

Basil Fawlty in this one: 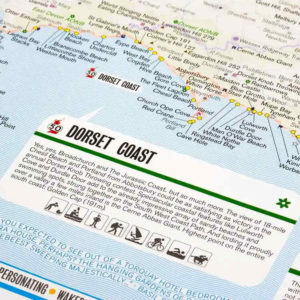 We Welsh are their punch bag. As mention in my post. Jewish people were regarded in a similar vein.. Just look what happened in the 1930s Germany. It only takes a maniac to get into power for the unthinkable to occur. And if ones doubt it could happen to Wales , think again.. History tends to repeat itself. . All I’d say is this. Remember what happened to Bosnian Muslims in the former Republic of Yugoslavia.. The Marsh Arabs of Southern Iraq. The Kurds of Northern Iraq.. The Palestinians. The Tamils of Sri Lanka. The Rohingya Muslims of Myanmar. All… Read more »

Most of the names on the maps are colonial English misspellings

Isn’t Tregaron Bog located near the car park and locked at night?

At least that would be the kind of take I’d put on it were I to be asked if I knew where Tregaron Bog was. This kind of thing gives great scope for gleeful perversity!

Racism towards Wales and the Welsh is the last accepted prejudice.

Can you imagine if these comments was made on map of Israel about Hebrew or Yiddish. This lowbrow company would be called anti-Semitic and likely cease trading.

Oh, but it’s only Wales, they say. Get a sense of humour. It’s only banter. Anyway, it’s not racist. The Welsh are white. But I reply, so are the Jews.

Even with a quite scant reading of the legislation you begin to realise that much of what is said about Welsh people as “banter” could quite easily be ‘hiliaeth’ despite what dodgy logic might suggest. The situation continues because Welsh people by and large don’t pursue it. It’s not acceptable, but continues to be so because we don’t press charges often enough. The law is there, and has been successfully used, it just has to be used far more often so the message becomes crystal clear. We may not be as well liked, but we will be far better respected.… Read more »

If I had my way, I’d ban the word ‘Wales’. This sounds rather fascist, and I know that I could never do that, but as an individual, I can choose not to use the ‘W words’. If I tell someone that I am ‘Welsh’, I’m actually telling them that I am a foreigner. So why should I tell someone that I am a foreigner ? – a word that I dislike in a global context, anyway. We are all fellow human beings. It’s a long haul, but when I’m speaking the language in which I am now writing, I do… Read more »

PS:
Re my discussion of ‘Wales’ etc, it’s interesting to note that in the international auxiliary language, Esperanto, we have Kimrujo = Cymru. Kimra = Cymraeg/Cymreig Kimro = Cymro, and Kimrino = Cymraes.
No suggestion of being ‘foreign’ there!

Perhaps we shopuld publish a map pointing out the ridiculous inconsistent spellings of Saes place names and their lack of vowels?

……….can anyone hear something saes behind that sofa?

To the best of my knowledge, the only sounds that are common in Welsh, but not in modern English, are CH and LL.

CH is very common in modern German which of course shares a common root with English. And the CH sound was common in Old English in words like “night”.

The LL sound is formed in the roof of the mouth, not in the throat.

So the “pint of phlegm” comment displays both boorishness and ignorance. A common combination.

They do have difficulties with R and RH, though.

But, hey, Cymraeg is much more phonemic and easier to read (with no silent letters, outside sometimes initial H in parts of the South), than English is.

I’m Welsh. I think it’s amusing. Blackadder was comedy/satire. Rowan Atkinson skewered the English through centuries of history. Taking offence on the slightest pretext seems to be endemic these days.

“skewered the English through centuries of history. “
Did he though. He certainly skewered individual English people and special interest groups comprising of English people. My recollection was that Blackadder reserved his skewering of whole nations to nations that weren’t England.