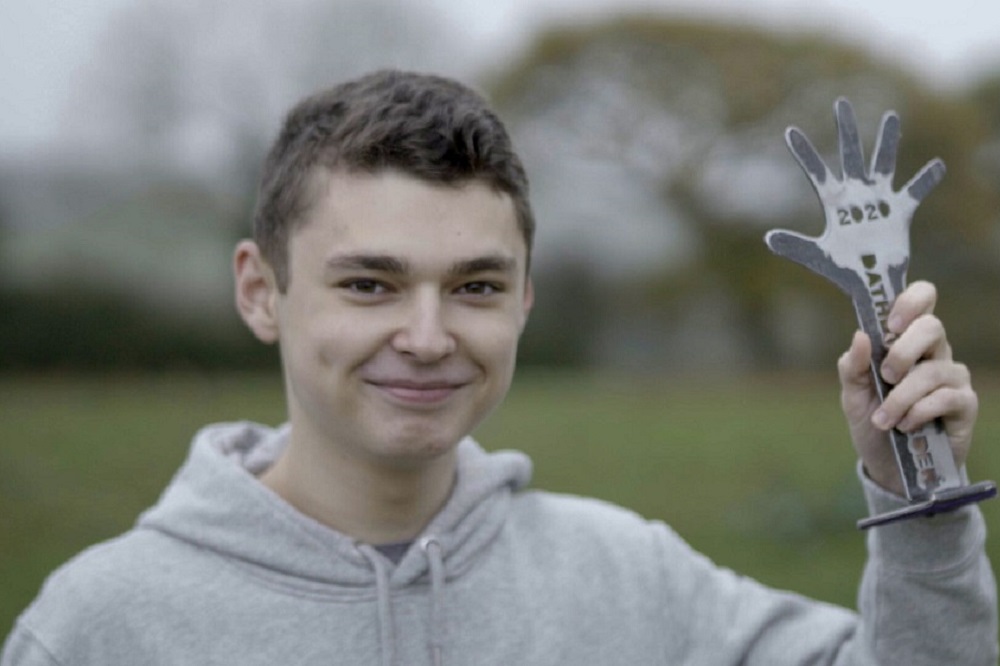 The mum of a teenage stats whiz has hit back at criticism for attending the official opening of the sixth Senedd term.

Donna Warburton and her son Lloyd Warburton were invited to the event by the Llywydd Elin Jones, who is also their local Senedd member.

According to Donna, her and Lloyd, who both support Welsh independence, have been accused of not being “nash enough any more” because they attended the opening of the Welsh Parliament. The sixth Senedd was opened by the Queen, and the Prince of Wales and the Duchess of Cornwall were also there.

Lloyd was invited to the event because of his award-winning work to keep Wales updated with the latest Covid-19 trends through much of the pandemic .

In response to the criticism Donna fired back, saying: “How dare we attend our Parliament on invitation by our own MS”.

While he was at the opening Lloyd met NHS Wales Chief Executive Dr. Andrew Goodall as well as Plaid Cymru leader Adam Price.

2 leaders and a future leader.
Great to catch up with @LloydCymru during the official opening of the 6th Senedd today, which was masterfully led by the Queen of the Senedd @yLlywydd @ElinCeredigion 🏴󠁧󠁢󠁷󠁬󠁳󠁿👑 pic.twitter.com/idsPLYDHbd

Donna said: “Apparently we’re not ‘nash’ enough any more. How dare we attend our Parliament on invitation by our own MS.”

Social media expert Owen Williams said: “You were attending the opening of the only Parliament we have. In what way is that *not* ‘Nash’?!”

Donna replied: “Thanks Owen. That’s how I saw it. It’s our parliament, the royals are the outsiders, not us.”

Ifan Huw Dafydd said: “You were not there because of the other guests that happened to attend. You, Lloyd especially, were there because he was being honoured by his nation for the excellent work he did during the pandemic. Period. Any other interpretation is childish and disingenuous. Diolch Lloyd.

Lloyd has recently revealed his intention to stand for the Welsh Youth Parliament.

The election will take from 1 to 22 November and those age 11 to 18 can register now to vote. Voters must register by 29 October.

The Welsh Youth Parliament was set up in 2018 to provide young people with a voice in Welsh politics. Forty members are elected in an electronic election using the Senedd constituencies and twenty further members were chosen by partner organisations.

All sixty members of the Parliament meet at the Senedd building in Cardiff, over a total of three occasions, during their two-year term. They then make recommendations to the Welsh Parliament itself.

“I am delighted to announce that I am standing to be Ceredigion’s next representative in the Welsh Youth Parliament,” Lloyd Warburton said on Twitter, and called for young people to register to vote for him.

You must be very proud of him Mrs Warburton, as a graduate of Prifysgol Aberystwyth myself I sure am and I will repeat that I hope he goes no further than up the hill to get his first degree. If I knew anybody his age I would certainly canvas for him…bob lwc

Try going back to bed and getting out of it on the right side, or take your tablets first before writing anything. Bilious creep.

You British nationalists always seem to find the strangest of angles. It’s probably because of how anti-Welsh you are

An absurd charge to level against lloyd and his mum. We need to beware of bogus social media accounts created to sow disharmony and divisions within the welsh indy movement

Agreed. The whole movement needs to spend a lot less time on social media full stop. Yes use it to promote our cause, but discuss our problems privately. We very much need to engage the broader electorate face to face. I shut my Twitter account, not because of trolls but because of friendly fire, squabbling and the feeling that I was speaking to a bubble. Focused now on next year’s council elections for Plaid Cymru. The more pro-independence politicians Wales returns, the better AFAIC.

You have one up above – Maurice Whisk – a classic s**tstirrer with nothing of value to say.

Perhaps we should stop giving this sock puppet something of value to consume if they provide “nothing of value”? Let their utterances die on the rotten vines the spread through these message boards. If they are designed to engender a negative response, do not respond negatively.

Wise words from CJPh. These brit nat trolls are best ignored and blocked – there is nothing to be gained from conversing with such wreckers.

In case I’m accused of voting negatively against the comment please be aware I pressed the down arrow by mistake.

The data collation this young man has provided is a monument to Cymru’s ability to handle our own affairs as an independent state. Diolch Mr Warburton. I wish science establishment figures would do a better job at differentiating between data presentation and analysis, especially due to the abysmal performance of the scientific and medical establishment at such extrapolations during the pandemic (this young man has fallen into this trap but gets a pass due to his youth – I centrainly made unwise proclamations based on things I discovered at his age). Take your pelters, grow, realise Socrates’ lesson with regards… Read more »

Donna should rightly be proud of Lloyd and vise versa. Well done to both of them.

this is the level of playground gossip, not journalism, absolutely ridiculous

If the Inter/Pol course in Aber is good enough for Sandhurst and if Lloyd’s ambition leans towards the ONS then it would be a strong foundation. Plus it would save him a load of dosh and his mum from undue worry and no doubt continue school friendships etc…

Same again. Let the lad make up his own decision about where he goes to study. Again, he will see a bit of the UK/Europe/the World and maybe decide against being poster boy for Welsh Nationalists who never leave their towns and villages except to go on holiday. It is a big world out there and a lot of old bigots on a failing news website spouting bile (we had Sion Cwilt saying David Amess deserved it) is a very trivial part of it. Shared house in a city in England /Scotland surrounded by a load of inner city badasses… Read more »

Look at you stereotyping like your argument depends on it. All I see from you is bilious ad hominems and repetition of tired old tropes. You’re just a troll.

This comments section is a renowned point of hatred and bigotry, to the point where people are making representation to the Senedd to request its Welsh Government endorsement be removed.

I am sorry no one listened to you on Twitter or read your “blog” I really am.

I’m sure he will, he might fancy York or Warwick, Imperial or LSE. Birmingham for health or north of the border away from the mess that is England. Maybe an internship with the ONS for a year to see how he likes that world. I obviously don’t know what is in the young fellers mind. As for Europe that ship has sailed sadly. I expect his old school will have had an input but for his peace of mind the view from the hill over Cardigan Bay always gave me a peaceful easy feeling. Once the world would have been… Read more »

“[view]from the hill over Cardigan Bay always gave me a peaceful easy feeling.”

Shame it didn’t stop the daily bigoted outpourings you parrot on here.

And define “mess” in the context of England?

I went to a Welsh university but the vast majority of my fellow students were from England/Scotland/Northern Ireland or from elsewhere in the world, which meant I got to discuss everything from politics to television with people who had vastly differing opinions and experiences. You do not have to go outside Wales to enjoy a cosmopolitan and multicultural experience with people from all over the world.

Good Point, I’m still in touch with one chap out in the Gulf…

Get you TE Lawrence.

They are “nash” enough, what does not showing up because the Engl*sh queen is there get them? Lloyd is fantastic.

She rules the place. She can go where she wants.