Music Festival in Tredegar will finally celebrate its 10th birthday 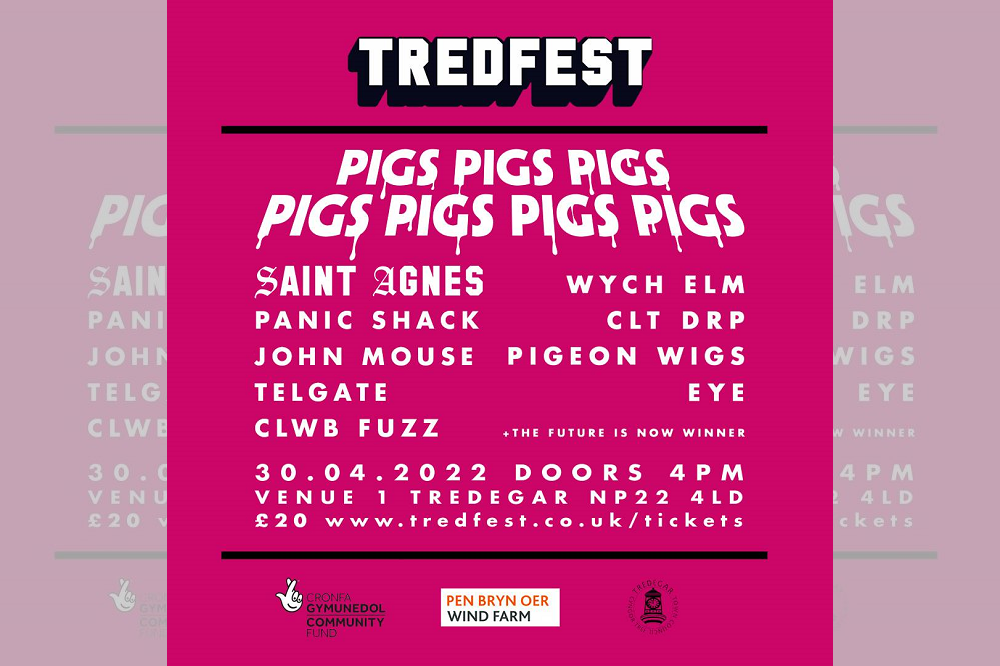 On Saturday 30 April TredFest music festival will be celebrating its 10th birthday, but almost 2 years late.

The popular one-day festival held in Venue 1, Tredegar should have been holding its landmark festival in 2020 but it had to be postponed due to the pandemic.

Despite this the organisers say they have worked hard to ensure that the festival will have its biggest ever line up.

TredFest will be headlined by Newcastle-upon-Tyne based heavy rockers Pigs Pigs Pigs Pigs Pigs Pigs Pigs. The eccentric quintet has been enjoying an upward trajectory over the last few years culminating in a sell out tour of the UK last year, including a 2-night stint at the legendary Camden Electric Ballroom.

There will also be a place on the line up for the winner of TredFest’s emerging artists competition The Future is Now as well as a Second Stage made up of all Welsh bands.

Founded in 2010 by two musicians, the festival has worked with over 100 bands, and aims to make live music accessible for everyone, using the arts to transform the local community.

TredFest Festival Director, Andrew Cotton said: “We were gutted to have missed out on celebrating this milestone 2 years ago but we were determined that as soon as we were able to we would come back with a festival line up that punches well above its weight.

“We are really excited to be able to bring artists of this calibre to Tredegar, an area that would usually be overlooked by touring bands.”

Cotton added: “We are thankful for the support of The National Lottery Community Fund and Pen Bryn Oer Wind Farm that has enabled us to put on this event.”

Tickets for TredFest are £20 and available from www.tredfest.co.uk/tickets or on the Dice.fm app.

It’s going to be a great festival, Pigsx7 playing in Tredegar is insane!