Preserving the Welsh language is the most important way of ensuring that Welsh identity survives, according to Nation.Cymru readers.

Strengthening Wales’ civic institutions came a very close second in a survey conducted to find out more about our readers’ views on politics and identity.

In comparison, few thought that ensuring that the majority were born or grew up in Wales was of any importance.

Fewer still thought that supporting the Welsh football or rugby teams were important, while preserving religion such as Welsh Nonconformism or the Church in Wales came in last place.

Welsh literature and music came in the third and fourth place, followed by preserving Wales’ medieval and industrial heritage.

Quizzed on their constitutional preferences for Wales, independence was the preferred option, although more powers for the Welsh Assembly came a close second.

Independence outside the EU was the third favourite choice, with the status quo in fourth place. Fewer powers and abolishing the Assembly came in last.

Nation.Cymru’s users were also very keen to stay in the EU, with only 77% saying that they would choose to do so. Only 8% supported a ‘hard Brexit’ with no access to the single market.

The survey was filled in by 956 Nation.Cymru readers, and the full results can be seen below. Some labels have been shortened to make them legible: 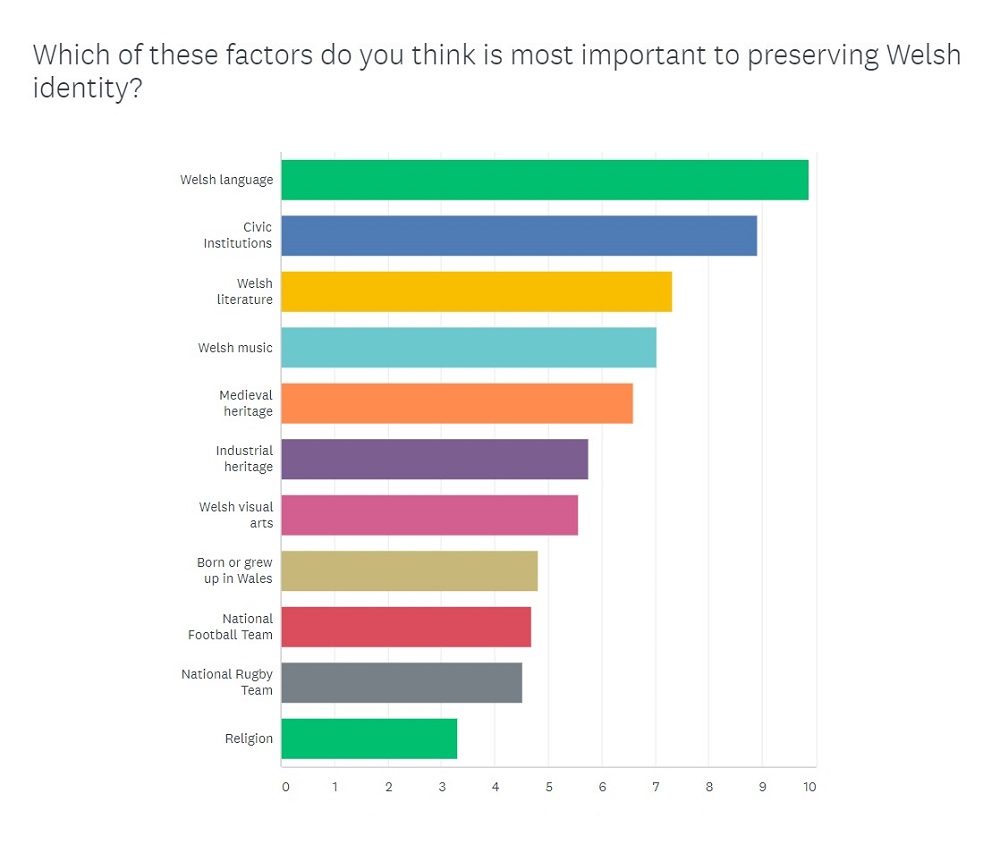 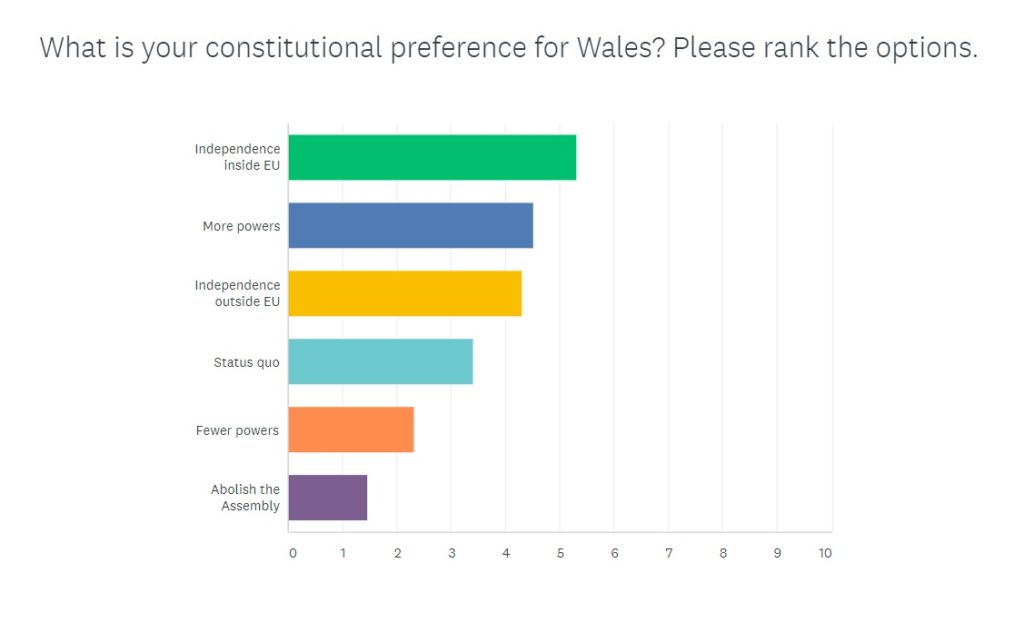 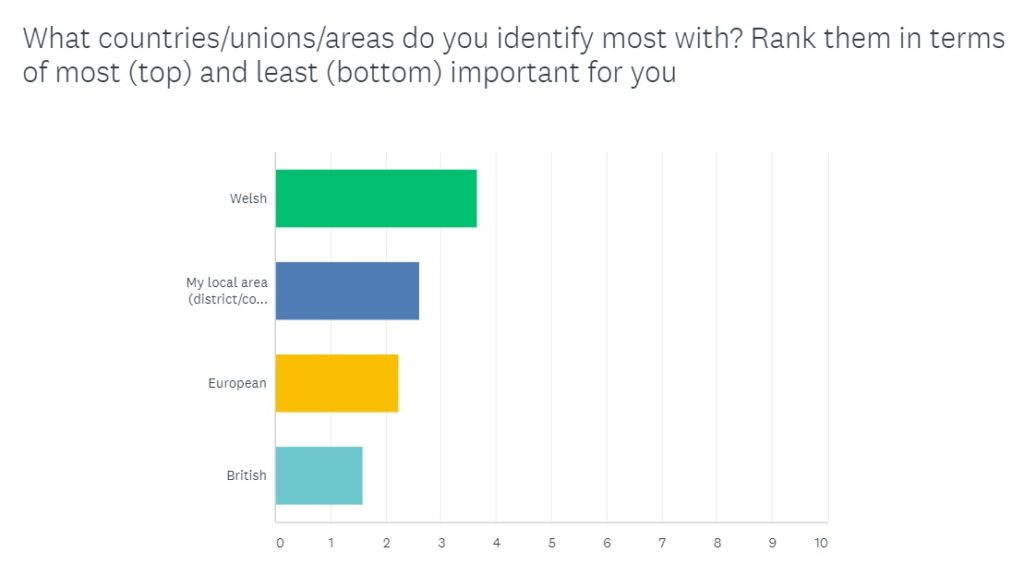 Last poll had independence at 32% whatever the situation/context….change is afoot

I remember reading somewhere the number of people who took part. I can’t think of the exact figure but I think it was around 100, give or take. The results don’t surprise me. They reflect the biases of this site’s commander and chief, and understandably, its main readership. What the results clearly don’t reflect is the Welsh nation taken as a whole.

It sometimes helps if on reads an article before posting a sneering response. The article says, quite clearly, that it was a “survey of Nation.Cymru readers”; so was designed to reflect the views of the site’s readership, rather than the “Welsh nation taken as a whole”.

Agreeing with the article’s premise is hardly sneering. The “sneering response” is in your mind only.

I think sport actually plays a big part in nationalism. One thats overlooked by nationalist movements… but it gets people singing in Welsh and people go out and support the Welsh national teams in rugby and football. Very powerful tool. So when i saw the result about how sport matters I thought “Well yeah most of these results are as expected and not really surprising.”

There I said it. Feel so much better. Usually sport gets sneered at by the middle class libertarian crusaders.

Hi Glasiad. 956 took part in the poll. As the article states, it’s a survey of Nation.Cymru and obviously shouldn’t be interpreted as reflecting the views of Wales as a whole.

Re: the biases of the site’s commander in chief, I generally just publish whatever articles come my way! – Best, Ifan

With regard to biases, we all have them. (There is no such thing as an unbiased opinion.) So that is not a criticism, rather an observation. As for the much smaller number of replies that I remember, perhaps that was while the survey was still underway, or some other explanation.

Oh, I know I’m biased. But not when it comes to posting content. I have a Ben Lake sticker on my car and yesterday I posted an article by the new Welsh Lib Dem leader on how she was going to take back Ceredigion. 😉 – Ifan

Oes, efallai. Predictable results, too, but grounds for optimism, bearing in mind it produced nearly a thousand responses.

It would be more meaningful if we knew the sample size, but the results as presented give no clue; only one of the graphs has percentages along the x-axis, but if you assume that the x-axes of the other graphs are actual numbers of responses then they all come out different, and much less than 100. I was disappointed (though not altogether surprised) to see that ‘Religion’ came bottom of the poll. Even so, I don’t think there is anyone who seriously disputes that the Welsh language survived into the 20th Century because, and only because, of the Welsh evangelical… Read more »

Meanlingless without sample size, and as it’s not provided, it leads me to think that it’s not big enough to warrant this article being taken seriously.

If you read the whole article you’d know how many took part. Copied from above article – ‘The survey was filled in by 956 Nation.Cymru readers, and the full results can be seen below etc etc.’

You’re absolutely right; well spotted! My eyes must have skipped over that last paragraph of text in my eagerness to look at the graphs (unless Ifan has edited the text since I read it, since I wasn’t the only one to ask the question). And actually, for a survey of this sort, just shy of 1000 is a pretty good sample size. It’s also quite a bit more than the number of regular subscribers to the site (686 according to the home page), so it must have attracted attention from elsewhere. That can only be good: the more this site… Read more »

Hi Eos. The 686 are just those who have signed up to the email updates. The site gets an average of 2800 visitors a day, although that number is dragged down a bit by weekends when we don’t post much.

Amazing stats. Any chance you could have a ‘live’ stats counter on the website? It gives heart to those of us who sometimes think we are speaking in isolation.

Diddorol! Ah, but yes, we readers and ‘contributors’ to Nation.Cymru are hardly typical. The results of the poll show what we as intellectuals of various sorts are interested in. These are the ideas that are swirling about and, i hope will shape the New Cymru. Esgob Morgan’s translation of the bible was responsible for supporting our nation and our language, certainly not capel. In the 19century and especially the first half of the 20th century, our nation was supported by two pillars: Capel, and Marxist-Leninism. Capel has been shown to be the fraud it was (and whilst not a christian,… Read more »

Perhaps the biggest lesson is how different Welsh nationalist opinion is to Welsh public opinion. Support for independence and Remaining in the EU is far higher amongst the website’s readership than it is amongst Welsh voters. That isn’t a surprise, but explains alot.

I’m struck by how much pro-Remain sentiment there is amongst those surveyed, compared to people who leave comments on Nation.Cymru articles.

I suppose surveys and quizzes are always a bit of fun and worth doing from time to time to increase engagement by readers who can’t be arsed to comment or can’t string two words together. Yes I did it – too many questions! The comments on the original article showed up the various flaws in this particular one. The results are usually fairly predictable. I look forward to the next one.

`Working´- class, worked from 15 to 63 yrs, in wales, england, then scandia. Gradually moved from trotsky to centre-right.
Don’t accept that there are typical citizens anymore, and this goes for Nat. Cym. folk. Results reflect my opinions in gen.
Supported Brexit, now regret it, and would be surprised if other’s opinions had not changed. Of course, not living in Wales
I view things from another position. Would like to see articles from architects, engineers, artists, please. Let’s Go!

“I’m struck by how much pro-Remain sentiment there is amongst those surveyed, compared to people who leave comments on Nation.Cymru articles.”

Goes to show you can’t set too much store by the comments.