Plans for a new nuclear power plant on Anglesey have been scrapped after Hitachi, the parent company of the developer Horizon Nuclear, failed to reach a funding agreement with the UK government.

The future of the Wylfa Newydd facility had appeared in jeopardy since January last year when work was paused because of rising costs and uncertainty over Brexit.

Construction of the plant could have cost up to £20 billion and would have created 9,000 jobs.

Isle of Anglesey council said the company had now confirmed in writing it is withdrawing from the project.

Council leader Llinos Medi said: “This is very disappointing, particularly at such a difficult time economically.”

She has asked to meet both the Welsh and UK governments to discuss the future of the site.

Neither Horizon Nuclear or the UK Government was prepared to comment on the project being scraped.

A two-reactor plant at Wylfa would have been was the biggest energy project ever built in Wales and was due to be operational by the mid-2020s.

“Smart lockdowns” an option for a second Covid-19 wave

Having recently published a 10-point plan to deal with a second pandemic wave, Adam Price MS (Plaid, Carms. E. & Dinefwr) asked what measures the Welsh Government would be willing to take on board?

“….could I ask that the First Minister examines the case for introducing, whenever possible, the targeted approach adopted by some countries based around smart lockdowns focused on high infection spikes at a community or neighbourhood level, rather than lockdowns across a whole local authority area?”
– Adam Price MS

The First Minister welcomed constructive contributions from the opposition, adding that the local lockdowns and targeted interventions – such as those based around meat processing plans in the summer – are examples of a smart lockdown.

There was disagreement over what the transmission rate (R-number) actually is in Wales, but in terms of testing capacity, three testing centres in Cardiff, Swansea and Rhyl are set to run at 24-hour capacity following a £32 million investment from the Welsh Government in August.

“We had 3,000 applications for the 160 jobs that will be recruited, and interviews for those posts began yesterday. So the sooner we are able to get those people in post, the sooner we will be able to get that lab capacity….And when we have more capacity in that way, we will be able to think again about who we test, when we test them, including….(allowing) us to consider the issue of asymptomatic testing in a different way.”
– First Minister, Mark Drakeford (Lab, Cardiff West)

Public confidence in NHS data management needs to be restored

With news of a major data breach at Public Health Wales involving 18,000 positive Covid-19 tests ( there’ve been a total of ~20,000 positive tests in Wales since the pandemic began), Leader of the Opposition, Paul Davies MS (Con, Preseli Pembs.), suggested the Welsh Government has known about this for weeks.

It also isn’t the first emergence of issues around personal data or misapplication of data.

“I hope you’ll now….apologise to the people affected by this latest data breach. Will you also take the opportunity to tell us how long the Welsh Government has known about this breach and what you’re doing to restore public confidence in its data management?”
– Leader of the Opposition, Paul Davies MS

There was no apology from the First Minister himself, who said it was right for Public Health Wales to apologise. The Information Commissioner has been informed and an inquiry has been launched into how this happened.

That said, the First Minister didn’t think it was right for Paul Davies to connect different incidents in the way that he did.

Facing more criticism from Paul Davies about a reduction in care home testing from weekly to fortnightly, the First Minister blamed the UK’s Lighthouse labs (which provide care home testing) and would look to see whether testing capacity should be brought back to, and increased in, Wales.

Mark Drakeford also confirmed discussions are ongoing with authorities over the practicalities of introducing routine Covid-19 testing at Cardiff Airport. 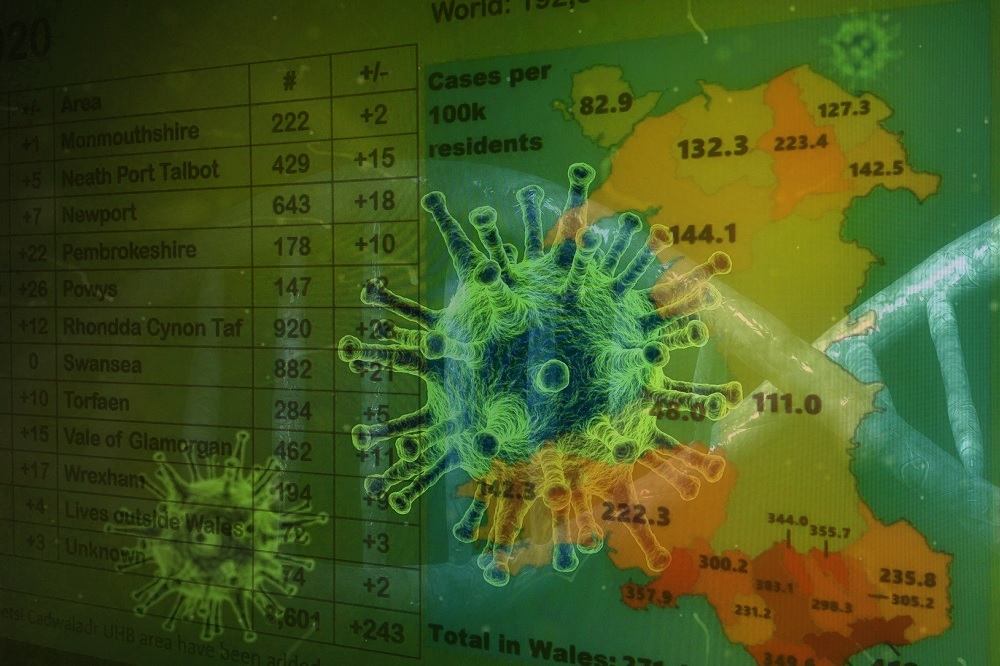 Picture a merger of @LloydCymru’s coronavirus updates and an image by Pete Linforth from Pixabay.

No new deaths from coronavirus in Wales for 14 straight days

There have been 110 new cases of coronavirus across Wales in the last 24 hours according to the latest figures released by Public Health Wales.

There have been no further deaths due to the virus in Wales for the 14th day in a row.

The weekly total in the area has increased to 165, surpassing the 150 cases in Caerphilly, which has been under a local lockdown since last Tuesday.

The infection rate in Rhondda Cynon Taf has now climbed to 68.4 per 100,000 people in the population, still behind Caerphilly’s 82.8 after 12 more cases were reported there.

There were also 12 new infections confirmed in Newport, the only other area to report in double figures. 72 people have tested positive in Newport over the last week taking the infection rate there to 46.5.

Overall, 19,681 people have tested positive for Covid-19 since the start of the outbreak, with 1,597 deaths dating back to the first fatality in March.

PHW reports there were 7,902 tests carried out on Monday.

Organisations in the culture and heritage sector can apply for financial support from the Welsh Government’s £53 million Cultural Recovery Fund from tomorrow.

A separate element of the Cultural Recovery Fund, worth £27.5 million, is being delivered through the Arts Council of Wales to support theatres and galleries. This fund was launched 17 August and applications are now closed, applicants are not able to apply for both Arts Council for Wales and Welsh Government Funding.

The Eligibility Checker for the Cultural Recovery Fund has been live since 1 September.

A non-repayable grant of up to £150,000 (up to 100% of eligible costs) per organisation will be available via two application entry points:

The fund will close for new applications on 2 October.

There will also be a £7 million fund for freelancers to support individuals in the sector who have been impacted by the pandemic. The fund will open for applications on Monday 5th October. Individuals are asked to check their eligibility before the applications open by visiting Eligibility Checker for the Cultural Recovery Fund.

Deputy Minister for Culture, Sport and Tourism, Lord Elis-Thomas, said: We recognise the massive and unprecedented challenges the pandemic is having on the very fabric of Welsh life and we applaud the resilience and creativity of these sectors. We have worked with the sector in order to deliver this funding, the eligibility tracker means that we can now move to process applications at pace to ensure that these organisations can access funding as quickly as possible. “

Health Minister Vaughan Gething has announced £33m of funding for a new facility for the Cardiff and Vale Health Board to manage any potential increase in COVID-19 cases this winter.

The announcement follows the decommissioning of the Dragon’s Heart Hospital at the Principality Stadium which we will be handed back to the WRU at the end of October.

The new facility, providing 400 extra beds, will be built next to the University Hospital of Wales.

Mr Gething said: ”This investment will help Cardiff and Vale University Health Board manage any potential increase in admissions caused by COVID-19 in what is likely to be a challenging winter for health and social care services.

“We know the winter can present greater difficulty for NHS staff, and with the virus more likely to spread in colder conditions we need to ensure we have the bed capacity to cope with increased demand.”

“There has been an enormous appetite for news during the pandemic and it has been more important than ever to ensure that the people of Wales have access to news that is accurate and relevant to them. But we are also acutely aware that the pandemic has put a huge strain on our news and media sectors, with depleted revenue from advertising and sales leading to job and service cuts.”
– Acting Committee Chair, Helen Mary Jones MS (Plaid, Mid & West Wales)

Balancing a big story with a difficult trading environment

The Committee heard that there was a strong appetite for news during the first peak of the pandemic, particularly locally-relevant news and changes to lockdown restrictions. However, Paul Rowland from Media Wales said: “trying to balance covering such an enormous story with such a difficult trading environment in the background has been very challenging”.

Dr Ifan Morgan Jones added that the crisis has been 20 years in the making due to a switch from print to digital media and wasn’t the only witness to suggest digital media going behind a paywall – though that comes at the risk of increasing reliance on advertising-funded UK media which doesn’t cover Welsh or local news.

Many of the contributions and recommendations were quite familiar: more calls for the UK Government furlough scheme to be extended; calls for some form of independently distributed public funding for the Welsh media; allowing hyperlocal websites to post statutory public notices and greater financial support for community radio.

Getting the message out

BBC Wales and ITV Wales both committed to, and properly prioritised, Wales-only public information and Welsh Government announcements. There was some criticism of the “sloppiness” by the UK-wide broadcasters on how they approached nation-specific information, with the UK often being confused with England.

There was praise for how the Welsh Government improved its communications as the first peak went on, with daily press briefings said to have been beneficial.

Emma Meese from Cardiff University said the Welsh Government has been more pro-active in supporting the hyperlocal sector, providing emergency funding worth £8,500 each to nine outlets.

For the larger print and online outlets – as well as community radio – which are reliant on advertising, however, the pandemic has had a disastrous impact. Some agencies pulled all their advertising and numerous job losses have been announced at Reach and Newsquest.

Media Wales’ NUJ branch chair, Martin Shipton, raised fears that a reorganisation of Reach’s editorial model (merging Media Welsh and English Midlands divisions) could result in generic pieces with no relevance to Wales – such as health – taking the place of copy from reporters based in Wales.

Network Rail has published a decarbonisation strategy (pdf) which will set out how the rail industry aims to become “net-zero” in terms of carbon emissions by 2050.

The Valley Lines, Cardiff Bay branch line and Coryton/City Line in Cardiff haven’t been included as they’ve been transferred to Transport for Wales as part of the South Wales Metro.

The programme’s capital costs (for the entire UK) – including the cost of new trains – is estimated to be anything up to £47 billion at 2020 prices.

The British Dental Association (BDA) has called for additional business support for private dental practices with fears a serious treatment backlog could last well into 2021.

Dentist, Tom Bysmouth, told BBC Wales: “Before lockdown, a typical practice with three dentists would see around 60 to 80 people a day, but that dramatically reduced over lockdown in order to comply with social distancing measures.”

The Welsh NHS is continuing to fund treatment as dental services gradually resume. However, dentists who mainly treat private patients are at a disadvantage, with calls for them to receive the same Welsh Government support as other private businesses.

BBC Wales was also told that some dental practices may close or make redundancies due to a shortfall in private work. The BDA called for a business rates holiday and for the UK Government to extend the furlough scheme.