News in Brief: Minister warns local lockdowns may not be enough to curb covid surge 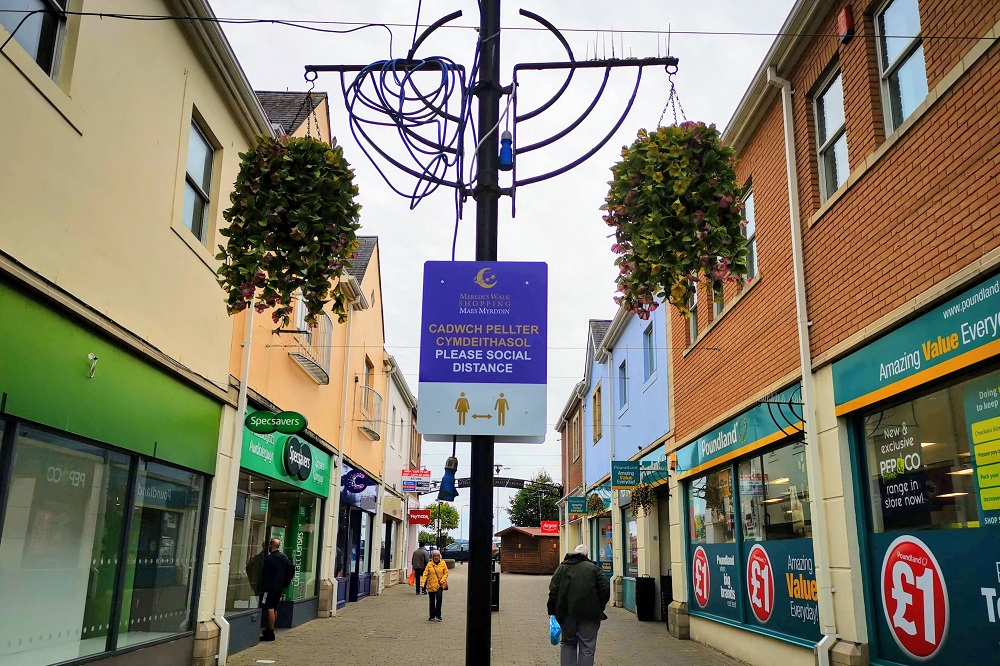 Photo by Nation.CymruHealth Minister Vaughan Gething has warned that coronavirus infection levels are close to those last seen in April and says local lockdowns may not be enough to curb the increase in cases across Wales over the last month.

Seventeen areas of Wales are currently under local restrictions, but the infection rate has risen nationally to over 100 cases per 100,000 people and the R rate, which tracks the number of people infected by each new case, is now 1.37.

More than 330 people have also been hospitalised due to the resurgence of the virus in recent weeks.

Speaking at the Welsh Government’s coronavirus briefing on Monday, Mr Gething said: “The measures we have put in place at both a local and a national level to date have helped to keep the spread of the virus under check.

“But there is growing concern these will not be enough to help us through the winter because the virus is spreading so quickly.

“We could see coronavirus infections reach the same level as the spring peak in just a couple of weeks.

“I do not want to scare people, but I do want people to understand that we face a potentially difficult few months ahead of us.”

Meanwhile, Andrew RT Davies, Welsh Conservative Shadow Minister for Health, has renewed calls for the government to publish detailed Covid-19 lockdown data without delay and says a new national lockdown in Wales would be “catastrophic”.

“Any return to a nation-wide lockdown would be catastrophic because ultimately it would push jobs off a cliff and hard-hit livelihoods,” he said.

“Wales is currently at a crossroads and now we desperately need to see the Welsh Labour-led Government swiftly publish detailed COVID-19 lockdown data on a ward-by-ward basis across Wales to decide if further localised lockdowns are required.

“COVID-19 knows no boundaries and therefore it’s imperative that we see action.”

The latest figures from Public Health Wales have confirmed four more deaths due to coronavirus in the last 24 hours and 487 new cases.

There has been a total of 1,673 deaths and 30,608 people have tested positive since the pandemic hit Wales at the end of February.

Cardiff recorded 84 new infections in the last 24 hours, the highest in Wales, followed by 42 in Wrexham, 36 in Flintshire and 35 in Rhondda Cynon Taf.

There have been 555 new cases in Cardiff over the last week as the proportion of positive tests has increased to 11%, second only to the 11.5% recorded in Flintshire.

Meanwhile, at Mondays press briefing Health Minister Vaughan Gething claimed there had been “an importation of coronavirus cases from contact with some of those high prevalence areas in England”.

Adam Price said he was “livid” at Boris Johnson’s approach to travel bans in areas of high coronavirus rates in England and said that it was time for Welsh Government to “act now”, and the time for “consideration” was over now that there was “actual evidence” of transmission of the virus occurring as a result of people coming from high infection areas of England into Wales.

“I would be more than disappointed, I’m livid at the attitude of the Prime Minister. But the question is what should the Welsh Government do? And they need to act themselves,” Mr Price said.

“Previously Mark Drakeford has said there was not any evidence of this kind of infection from people travelling from over the border.

“Now, we heard it there from Health Minister Vaughan Gething for the first time that there is actual evidence that has been identified of transmission that has happened as a result of people coming from high infection areas of England into Wales.

“We’re beyond the point of “consideration” – the Welsh Government needs to act today.”

The majority of sports clubs below the elite level have been closed down since the national lockdown was implemented in March.

Mr ap Iorwerth also says that additional money should be allocated specifically to the sport’s governing bodies to enable them to tailor support across clubs or leagues as they see fit.

“The sustainability of sports clubs across Wales is a real concern, and football is just one example,” he said.

“Local football clubs are telling me that they are going to disappear without financial support. The knock-on effects will make Wales less active, less healthy and with fewer opportunities for future generations.

“A local sports team is more than the sport itself – it’s about bringing communities together, the health benefits and of course, feeding talent through to higher tiers. Without clubs progressing at the grass roots level, ultimately the national game will suffer.

“It’s important that financial support is made available to governing bodies who can then decide how best to use the money.”

Three people are due to appear in court following an anti-lockdown protest in Cardiff on Sunday.

Several hundred protesters gathered outside the Senedd in Cardiff Bay to oppose restrictions introduced to curb the spread of coronavirus.

South Wales Police said two men and a woman are accused of breaching rules by travelling into the city without reasonable excuse.

Under the local lockdown rules put in place by the Welsh Government, no-one is currently allowed to enter or leave Cardiff without a reasonable excuse, and mass gatherings are banned.

A statement from the police said: “We are duty-bound to take into account all relevant legislation, and South Wales Police has strived to maintain a consistent policing style of engaging, explaining and encouraging, and enforcing as last resort where necessary, throughout this public health emergency.

“This approach was maintained throughout the event.”

“It is unacceptable and extremely disappointing that people have flouted the rules by travelling into Cardiff and gathering in large numbers.

“Inquiries are continuing and further action against other individuals is anticipated once all evidence has been considered.”

Betsi Cadwaladr health board to remain in special measures

After more than five years in Welsh Government special measures, Betsi Cadwaladr health board is set to remain in that position following a review of escalation measures by officials.

While there was praise in the manner by which the health board – which covers the north of Wales – had handled the pandemic “there remained concerns on performance and strategic solutions that may require specific external support”, particularly concerning mental health services.

Hywel Dda and Swansea Bay health boards were de-escalated from “targeted intervention” (the step below special measures) to “enhanced monitoring”. Cwm Taf Morgannwg’s maternity services will also remain in special measures for the time being.

Plaid Cymru recently called for Betsi Cadwaladr health board to be scrapped and reformed.

The Welsh Government has started the roll-out of “baby boxes” for new parents. The boxes – based on an idea from Finland – provide new parents with essential supplies such as clothing, toys, reusable nappies and sleep sacks.

The pilot involves 200 new parents in the Swansea Bay health board area and parents can choose whether or not to accept the bundle.

Deputy Minister for Health & Social Services, Julie Morgan (Lab, Cardiff North) said: “This is particularly important now for families whose babies are born in the midst of a pandemic, and we also hope these bundles will promote a more equal playing field for parents and their babies by reducing expenditure on newborn essentials.”

Parents groups have demanded that a “postcode lottery” in home teaching as a result of the Covid-19 pandemic is dealt with.

Parents’ Voice told BBC Wales that some children had received “next to nothing” in terms of school work to do at home or online lessons over the last few months despite Welsh Government guidance on how to provide them.

More than 250 schools in Wales had reported new Covid-19 cases within the last 21 days. Standard practice is for schools to request that students remain at home for two weeks in “bubbles” when it’s confirmed they’ve come into contact with someone infected with the virus.