An eco-friendly company has created a “stunning” secret meadow in the middle of an industrial estate.

Family firm Platts Agriculture Ltd created the wildlife haven on a plot of land outside their head office on Llay Industrial Estate near Wrexham.

Instead of mowing it as they usually would have done in May, they deliberately let it grow.

The parcel of land, now affectionately known as Platts Pasture, is now teeming with a host of different grasses and flowers, including bee orchids, and is buzzing with bees and damsel flies.

The company is now hoping to persuade other businesses to join a campaign and introduce their own green measures to transform Llay Industrial Estate into a wildlife zone.

Six months ago they employed Alison Fuller, who has a National Diploma in Agriculture and a degree in Environmental Science, as the Group Quality, Health, Safety and Environmental Manager.

“The introduction of Platts Pasture has been very popular with the staff and we’ve mown a path through it so they can go for a little walk at lunch time,” she said.

“We’re also going to install a bench there so you can sit down and have your lunch.

“Importantly, it’s increased plant biodiversity and there’s food for bees and other pollinating insects. You’ve got more habitat there for a lot more invertebrates. Then when the flowers seed, you’ve got food for birds as well.

“In the autumn, it’ll be mowed once the plants have seeded and then we’ll sow wild flower seeds, so by next summer we should have poppies and different wild plants. It’ll look absolutely stunning.”

According to Alison, she’s hoping to win hearts and minds on the industrial estate with the aim of making it a greener place.

She added: “The Llay Industrial Estate Forum shut down during Covid and I have asked if we could do a presentation about what we’ve done and encourage others to follow suit.

“The estate could become a wildlife corridor or environmental zone which would be good news for planet and everybody who lives on it.”

Alison explained that adding to the company’s positive impact on the environment was a big part of her job.

She said: “There’s a core belief at Platts about the importance of the environment so I am pushing at an open door.

“It’s nice to be in a job to actually help to reduce emissions and reduce impact. I’ve got the time and finance to actually do that, as well as the moral support.

“One of the first things that I suggested is a very simple thing but it’s had quite a good impact is about using the local milkman with milk in reusable glass bottles.

“That ticks lots of boxes because it reduces our plastic waste, supports a local business and it’s supporting the dairy industry with whom we work.”

The initiative is one of the ground-breaking measures that has earned Platts the coveted Green Dragon accreditation awarded to organisations that demonstrate effective environmental management.

The Green Dragon Award is the latest a series of accolades for Platts who were recently named as UK Family Business of the Year by the Federation of Small Businesses (FSB) after they gave £1,000 each to their 60 staff for going above and beyond during the Covid crisis.

They had previously won the FSB’s Environment Award for Wales after introducing a raft of green initiatives across their three sites.

The company has invested £1 million in two new baling lines which has led to a 30 per cent reduction in the use of polythene per unit and more recycled material being used in packaging.

At the same time, they have increased the number of bales being stacked on each pallet which means more can be delivered per lorry load.

In addition, five new Mercedes trucks have been added to the fleet, making it 20 per cent more fuel efficient and reducing carbon emissions.

Making the company as environmentally responsible as possible is an “absolute passion” for Managing Director Caroline Platt.

Caroline is the daughter of founders Robert and Christine Platt and her son, Christopher, has joined as a director, adding even more entrepreneurial energy.

Managing Director Caroline Platt was proud of what they had achieved so far but added that they were not resting on their green laurels.

She said: “Being as environmentally sustainable as possible is a golden thread running through everything we do at Platts.

“As well as making a lot of sense in terms of the planet, there is an increasing commercial benefit in adopting a greener approach to business.

“That’s why we’re hoping to persuade other companies on Llay Industrial Estate to join us and create something of a green revolution.”

That’s really great… I used to work on Wrecsam Industrial estate, each day at break time I would go and sit on the site of an old factory that was turning into a young forest. Tadpoles in spring, birds in the immature trees. Kestrels hovered above and sat upon the street lights, foxes prowled in the early hours. Huge white owls. My friend Pavel once found a newt there and put it in a cup to show me, We released it onto a rock by the stream that ran there and it was like it disappeared into thin air. There… Read more »

This is brilliant, but a word of caution.
A client once did this on one of their sites to enrich habitat and keep down maintenance costs. Universally popular. Green points. An award even.
2 years later they needed to replace some pipeline. the ecologists said “NO WAY. There is evidence of protected species. You are not changing or working in that land”. Cost them £200k to abandon the pipeline and lay a new diverted pipeline around the meadow.

Richard 1
Reply to  One of the two witnesses

If this is a true story (not that I doubt it but there are some really odd people on the internet) it raises an important issue that needs to be heeded at high level. I hope N.C will take note of the potential damage to commercial interests and to wildlife and commission some investigation.

One of the two witnesses
Reply to  Richard 1

Yes fair enough the internet is full of bull, so you only have my word for it. But for added detail, the client was one of the big water companies. The site was within one of their Treatment works. The protected species was some kind of mouse, although that part of the world also has loads of great crested newts. I dunno if ecologists usually have that level of power or it it was the authority’s own processes that required it. The same client also paid £250k to resite a storm tank a further 50m from a tree because they… Read more »

I’m hand rearing these two at the moment, they fell out of a nest a week ago, they’ve just started to feed themselves which makes life a bit easier. Another week and they’ll be learning to fly, will be a bit stressful. 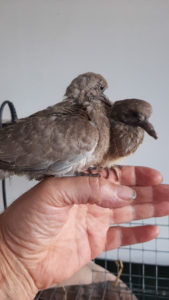