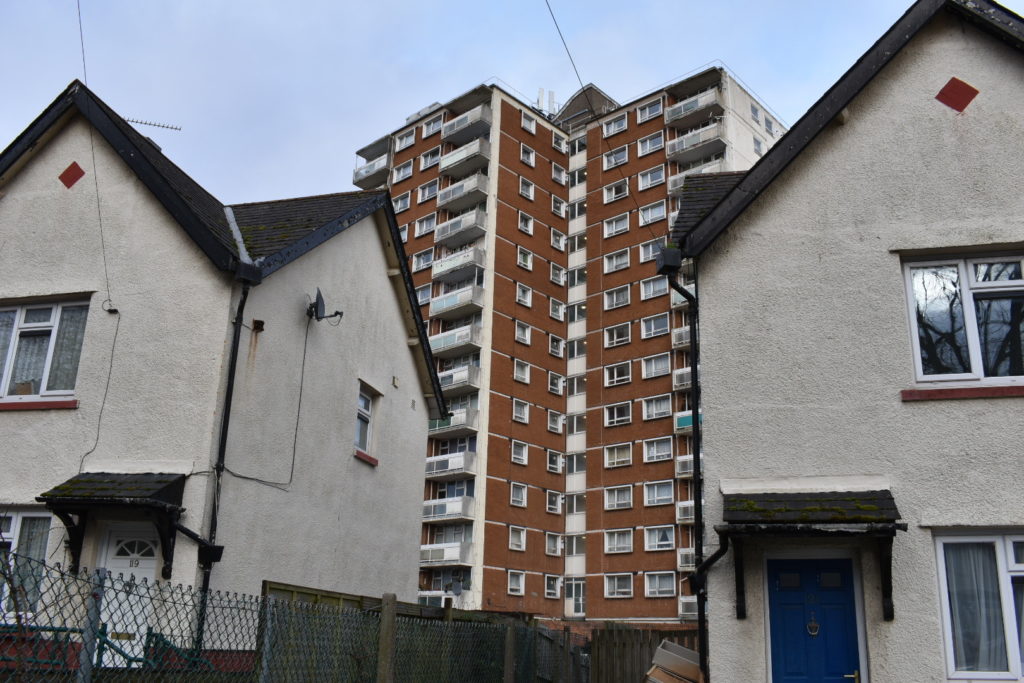 There are fears that plans to redevelop a housing estate by replacing houses and flats with new homes could lead to ‘gentrification’.

Cardiff council wants to redevelop the Channel View estate in Grangetown by knocking down houses and a block of flats before building about twice as many in their place.

A lot of the houses there are suffering from subsidence, and the block of flats has had problems with combustible cladding, discovered after the Grenfell Tower fire.

While the plans will provide much-needed new council houses, many people living there now will have to move out of their homes, where they have lived for decades.

The council said the proposals will keep the same housing mix, so residents can move from their existing property into a new one

A spokesperson said: “This scheme keeps the existing community together, and gives all residents who want to do so the opportunity to have a new home in the development.”

Some people living on the estate raised concerns about the consultation process, whether they might have to leave the area, and if the plans will lead to the area getting ‘gentrified’.

Helen Brito lives on South Clive Street. She claims her house, where she has lived for 27 years, will likely get knocked down “so a bus can turn around”.

The redevelopment plans include joining up the southern ends of Channel View Road and South Clive Street. Architects working for the council say this would “improve the existing bus route network”. Six houses on South Clive Street would need to be demolished.

Ms Brito said: “For them to demolish my house for a bus route doesn’t make any sense. I first heard about the plans just before last Christmas.”

Further up the street, houses would be knocked down to make way for a path from Beecher Avenue to Ferry Road Park.

One resident said: “I don’t understand how they can justify taking away four houses for green space when we have a park [the Marl] just across the road. It doesn’t make sense.”

Another resident living next to the proposed path to Ferry Road Park said: “We were told just the high rise flats were coming down. Nothing else.”

A council spokesman said: “All South Clive Street residents were written to in September. Cardiff council has been directly consulting with residents since 2016, including five face-to-face consultation events for residents living on the Channel View estate, residents written to over 20 times, written directly to all private owners affected by the proposals to seek views, understand concerns and discuss options.”

The council insists that nobody will need to leave Grangetown and any resident who has to move out will be able to get a new home on the estate. But several people living there fear they will be forced out of the area, or have to move into a smaller property.

Ms Brito said: “I know everyone around here, it’s one big community. Everyone knows each other and generations have grown up here. But they’re tearing up the community and chucking them where they want.”

Dougie Turton lives on Channel View Road. He said: “We don’t want to go out of the area. We don’t want to go to Ely or St Mellons. We’re Grangetown, all our life. I don’t agree with what they’re doing round here. It’s wrong. I would hate to leave here.”

A council spokesman said: “Residents have a new home on the redevelopment, so they don’t have to move out of Grangetown.”

Mr Turton, who owns his three-bed house, fears the council won’t offer enough money for it. He said he is worried he won’t be able to afford another three-bed house after the redevelopment, meaning he will either have to move to a cheaper part of Cardiff or downsize.

He said: “I would like to come back and have a three-bed house, but I don’t know how much money it would be. We would have to take another mortgage.”

The council said its priority is protecting the equity in homes and homeowner status. A spokesman said: “Each property is valued independently, with any structural issues such as subsidence discounted, so as not to reduce the valuation.

“Should the value of the new house exceed the valuation of their current property and they are not able to fund any gap themselves, the council can offer a shared equity option whereby the owner’s current equity value is transferred into a new property and the council retains a ‘silent’ equity of the remainder. This can be bought out by the owner at any time. There will be no rent on the council share and this will retain the homeowner status as owner.”

Jamie James also lives on Channel View Road, and rents a three-bed house. The father-of-two claimed the council told him he was only eligible for a two-bed house after the redevelopment, meaning his two daughters would have to share a bedroom.

He said: “What they have offered us is not like-for-like. It’s sneaky. I’m angry how it’s been done. I told them I want to go back to a three-bed house, but I haven’t heard anything back since.”

The council said: “Owners will be offered a like for like property and the council will work with tenants with regards to their individual housing need.”

Mr James added: “The way they’re doing it is gentrification. They’re paying people off to move out. The community is being ripped apart.”

He pointed to the nearby Prospect Place. A 10-minute walk down the river, this is a recently-built gated community of flats with views over Cardiff Bay. The wider area has seen several new developments, including luxury flats Victoria Wharf less than a mile away.

Several people on the Channel View estate drew comparisons with the Billybanks, a mile and a half away, where a working class community was forced out of their homes.

When the Billybanks council housing estate in Penarth was built in the 1960s, residents had a view of Cardiff’s mudflats and docklands. But after Cardiff Bay and the barrage were built, the land shot up in value. The community was kicked out, their homes demolished, and luxury flats were built at what is now called Penarth Heights.

Ms Brito also fears the redevelopment of Channel View will  mean the area becoming gentrified. She said: “I’m going to fight them all the way. I’m not doing it for myself. I’m doing it to keep the community from being torn apart.”

Most of the residents interviewed asked for more clarity about the plans, wanting to know the details of what will happen and when.

A council spokesman said: “Regular updates and newsletters are sent to all residents, including South Clive Street. The timing and phasing of the scheme means that details need to be released at the right time.

“The stage is about to be reached when more details of the proposed phasing plan can be made available and shared with residents. Letters will be sent in the next few weeks, and the website remains live throughout this project.”

Councillor Lynda Thorne, cabinet member for housing and communities, said: “The regeneration of the Channel View estate represents an investment of around £60 million in this part of the city that will benefit existing residents by delivering a better connected, more attractive place to live.

“Channel View is a strong and vibrant community within Grangetown, but there are a number of issues with the condition of the current estate. This is a fantastic opportunity for us to not only address those issues, but to breathe new life into the wider area by creating the type of good quality homes and attractive neighbourhoods we want to see in a modern city.

“We have been speaking to existing residents for a number of years. The latest consultation with the Grangetown community took place at the end of last year, to hear the views of existing residents about our vision and fully involve people who work and live in the area in our plans, and there has been a high level of support for the proposals.

“It’s been one of our key aims to deliver the redevelopment in phases so that the existing residents are able to remain living on the estate, before they transfer from their existing home into a new property once built.

“Our aspirations to build new homes in volume and at pace directly complements the Welsh Government’s target of delivering new affordable homes throughout Wales at pace and scale. We are making very good progress to increase the amount of good quality, affordable homes in the city to meet the high level of demand.

“The £378 million investment in social housing, including new council homes, announced today in the council’s 2021/22 budget, is further evidence of our commitment to provide modern and affordable housing for the people of Cardiff.”