Public Health Wales has confirmed that Cardiff, Vale of Glamorgan, Swansea, Carmarthenshire, Anglesey, Conwy, Denbighshire and Flintshire are being closely monitored by health officials as the number of coronavirus infections continues to climb across the country.

281 new cases of Covid-19 have been reported in the latest update from PHW, as Bridgend, Blaenau Gwent, Merthyr Tydfil and Newport face new restrictions from 6pm today due to the recent spike in cases.

Dr Giri Shankar, Incident Director for the coronavirus outbreak response at Public Health Wales, said: “We are continuing to see a steady increase in cases in many communities across Wales, and our investigations show that many of these have been transmitted due to a lack of social distancing.

“The council areas of Cardiff, Swansea, the Vale of Glamorgan, Carmarthen, Anglesey, Conwy, Denbighshire and Flintshire are all areas of concern to us and we are watching the data from there carefully, but numbers of cases are increasing in all parts of Wales so there is no room for complacency in any area.

“We are also seeing an increase in the number of people who are seriously ill and have been admitted to hospital with COVID-19.

“We are concerned that much of the good work conducted over the past few months is at risk of going to waste. If the situation continues to worsen, we may find ourselves at the same levels of infection that we experienced earlier this year in March and April; and with that comes the potential for more extended restrictions to be imposed nationally.”

Despite the local lockdown put in place in Rhondda Cynon Taf last week, cases are continuing to surge, with 77 reported in the last 24 hours by PHW. The infection rate in RCT is now 102.4 per 100,000 people over the last seven days and the positive proportion of tests per 100,000 has jumped to 7.1.

Across Wales 9,780 tests were conducted in the last 24 hours.

With further changes to coronavirus restrictions set to be announced to the public later, Adam Price MS (Plaid, Carms. E. & Dinwfwr), asked was this second wave down to the public not obeying the rules or bad policy?

He supported local lockdowns, believing that not placing tighter restrictions on areas with low transmission rates will incentivise people in all areas to stick to the rules.

The First Minister said that many of the measures announced for England – encouraging working from home, a legal obligation on businesses regarding 2-metre social distancing and stricter restrictions on different households meeting – were already in effect in Wales and backed by regulations.

He hinted that advice to avoid unnecessary travel will form a key part of new national measures in Wales, to be announced later:

“I think that as a message to people everywhere about minimising travel and staying close to home as much as you are able to is another brick in a national wall that we can build. After that, I’m still of the same mind as Adam Price suggested that local measures for local circumstances at this point in the virus remain the right response in Wales.”
– First Minister, Mark Drakeford (Lab, Cardiff West)

A question of trust

Filling in for the Leader of the Opposition, Suzy Davies MS (Con, South Wales West), pointed to the First Minister’s comments at Labour’s virtual conference on rebuilding trust with the public ahead of the next Senedd election.

The Health Minister’s “Orwellian” comments about compulsory Covid-19 vaccination on ITV’s Sharp End didn’t help matters; though the Minister has since categorically denied there are any plans for mandatory vaccination.

Another possible example of trust being broken was the recent Public Health Wales data leak:

“….we’ve had data issues three times in a row now. Once – obviously, that would be misfortune. Twice would be carelessness. But a third time suggests to me we’ve got a Welsh Government that’s not that keen on taking responsibility for something that has really shocked a lot of people here. We are relying on track and trace to be the answer to keeping this pandemic under control, and to avoid….national lockdowns.”
– Suzy Davies MS

The First Minister went on the attack. It was clear from surveys on public trust that the people of Wales trust the Welsh Government far more than the UK Government. Having earned the electorate’s trust five times in a row it’s right not to take a sixth time for granted.

On track and trace, it was clear the Welsh system was highly-trusted as well:

“….of the 440 positive cases that were eligible for follow up in the track test, trace, protect system in the most recent period, 96% were reached, and they provided details of their recent contacts. That says to me that our system is very well trusted and very well regarded, and 89% of all those contacts were also successfully contacted and were able to have their cases resolved. We have very high levels of trust in the Welsh system, and anything that she says to the contrary is simply borne out by the facts.”
– First Minister, Mark Drakeford 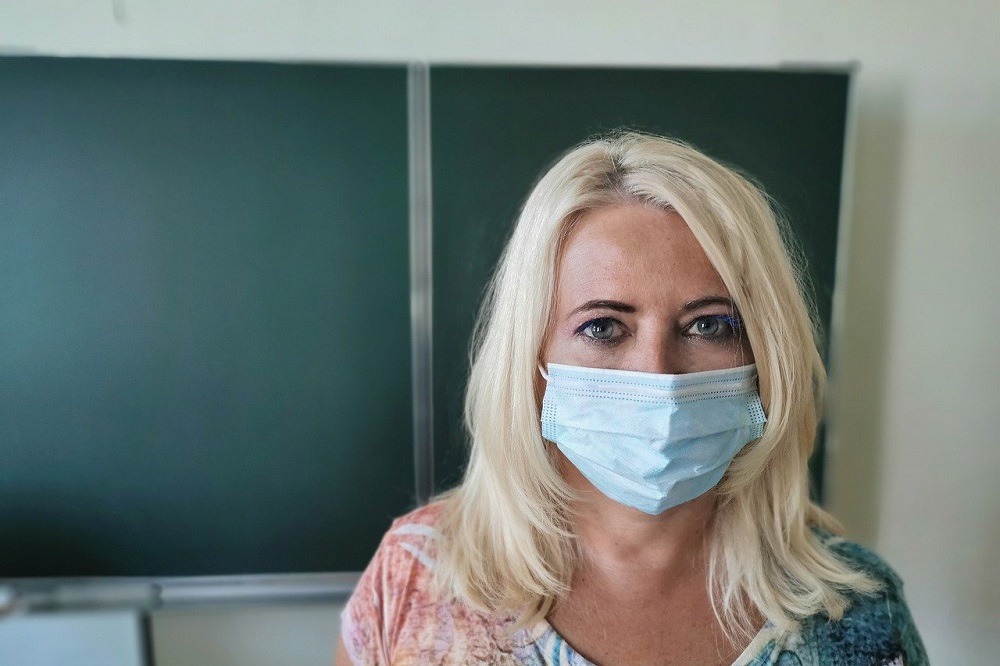 Teacher wearing a face mask. Photo by Alexandra Koch from PixabayUnions press for teachers and school workers  to be prioritised for coronavirus tests

Trade unions representing members working in schools in Wales have called for everyone employed in the sector to be prioritised for coronavirus testing.

According to Public Health Wales over 50 schools have been affected by Covid-19 cases since the start of the new term earlier this month.

With cases increasing dramatically in the last two weeks the UK-wide Lighthouse labs testing system has struggled with capacity and has often sent people requiring tests on long journeys to be tested.

In Wales testing is split between NHS Wales testing and the Lighthouse labs and the Welsh government says it is increasing NHS capacity to meet the extra demand.

In an open letter to First Minister Mark Drakeford, the GMB, teachers’ unions NEU, UCAC and NASUWT, head teachers’ unions NAHT and ASCL, Unison and Unite, the unions said: “Keeping schools open and properly staffed is a key priority for the sake of all school age children across Wales and for broader economic factors.

“The sooner staff who need a test are able to either definitively self-isolate where they have a positive result or return to work if they have a negative result and are well enough to do so, the better for pupils and staff at those affected schools.

“Workforce planning in order to provide safe school settings is proving difficult already without the ongoing threat of increasing members of staff unable to attend work because they can’t access a Covid-19 test.”

A Welsh Government spokesman said: “Every school in Wales is being provided with testing kits. The rapid deployment of testing by NHS Wales will also support individual schools, where needed.

“It’s also important to note that only school staff with symptoms of the coronavirus need to take a test and self-isolate.”

Mark Isherwood MS, Welsh Conservative spokesperson on autism, has described the launch of the government’s  public consultation on an autism code of practice yesterday as “window dressing” and pledged that his party would introduce an Autism Bill if they win next year’s Senedd election.

Specific legislation already exists in England and Northern Ireland but two years ago a Welsh Conservative Autism Bill was blocked by the Labour-led Government, which permitted its backbench members a free vote on the Bill, yet guided ministers not to back it.

In Wales there are roughly 31,000 people living with an autism spectrum condition.

Mr Isherwood said: “We have been here before.

“Consultations have merit and meaning only if they are acted upon, and I have my doubts whether the findings of this consultation will lead to what we Welsh Conservatives have pushed for: an Autism Act to protect and enhance the lives of the estimated one-in-100 people in Wales who live with autism.

“Anything less is just window dressing.”

“Without legislation, the Welsh Labour-led Government’s autism strategy is a voluntary wish list, and while any additional funding is welcome, what Wales’ autism community really needs is the same statutory support as their English and Northern Irish counterparts. Autism is a lifelong condition, and funding for services cannot be provided year by year.

“An Autism Bill would have played play a pivotal role in ensuring people with this condition are confident that they will receive the support they need. Consequently, a Welsh Conservative Government elected in May next year will renew action to introduce one.”

The consultation will run for 12 weeks until December 14.

The moratorium against forfeiture for the non-payment of rent, which was due to end on 30 September, will now run up to 31 December.

The government advises businesses that rent due should continue to be paid whenever possible, but the latest measure will ensure no business is forced out of its premises if it misses a payment between now and the end of the year.

This will also ease the burden on retailers at a time of immense challenge for the sector, including the winding down of the UK Government’s Job Retention Scheme.

Minister for Economy, Transport and North Wales Ken Skates, said: “We know there continues to be considerable concern among the retail sector in Wales, and we are extending these measures further in recognition of the incredible difficulties facing them and many other businesses across Wales.

“This will prevent unreasonable evictions in the run up to the crucial Christmas period, protecting jobs and safeguarding businesses.”

The first ministers of Wales, Scotland and Northern Ireland have joined forces to press the case for the UK Government to provide emergency support to the aerospace industry, which has been badly affected by the Covid-19 pandemic.

In a joint letter to UK Prime Minister, Boris Johnson, the first ministers called for the creation of an aerospace taskforce to show that “all our governments remain committed to working together in order to preserve this sector that is hugely important to the whole of the UK”.

Trade unions have suggested tens of thousands of jobs could be lost as a result of the pandemic and a downturn in air travel, with a combined 2,000+ jobs under threat in Wales at British Airways Maintainance at Rhoose, GE Aviation at Nantgarw and the Airbus wing factory at Broughton.

Envoys appointed to promote Wales around the world

All three will have the official title of “Welsh Government Envoy”. The role is paid on an expenses-only basis, with a fourth envoy set to be appointed before the end of 2020.

The Minister said: “We are honoured that Koji Tokumasu, La-Chun Lindsay and Aled Miles have agreed to be flag carriers for our nation and they will offer in-market support for our export and inward investment ambitions, whilst also playing a wider role in raising awareness of Wales and promoting areas of Welsh excellence.”