Following the announcement by First Minister Mark Drakeford yesterday that the coronavirus lockdown in Wales was being extended for a further 3 weeks, with minor modifications, Health Minister Vaughan Gething has published a summary of the scientific advice that is being used to shape the government’s approach to the pandemic.

Dr Rob Orford, Chief Scientific Adviser for Health to the Welsh Government, explains in the report that information from the UK Government’s Scientific Advisory Group for Emergencies as well as the Welsh government’s own Technical Advisory Cell (TAC),  forms a significant part of the information flow to ministers and observes: “It’s important to note that these statistics and evidence are collated Independently of ministers, and provided as advice to inform decision-making. Scientists advise and politicians decide, so they say.”

During yesterday’s press briefing Mr Drakeford stressed the importance of infection rates in shaping when restrictions can be lifted and pointed out that that just a small increase in the rate of transmission of the coronavirus – the so-called ‘R’ number – would mean thousands more in hospital and as many as 7,200 deaths.

If R is below 1, each case will give rise to fewer than one additional case, so over time case numbers will dwindle to zero. However, if R is above 1, case numbers will increase exponentially. The higher the R, the faster this increase will occur.

The new reports suggests the rate of transmission for coronarvirus in Wales is currently between 0.7-0.9, this means for every ten people that are infected, seven further people will be infected.

The rate has significantly decreased in Wales since social distancing and lockdown measures were introduced. It had been previously been estimated as high as 2.8.

But keeping the transmission rate below 1 is critical to the government’s efforts to make sure the right restrictions are lifted at the correct time in the right way – and the modelling shows the potentially fatal consequences of a misstep and subsequent increase in cases.

A small increase above 1, maintained for 3 months, can have a huge impact on hospital demand. It can greatly increase the number of hospital admissions and deaths.

Admissions per day under different scenarios of Rt.

In the build up up to the bank holiday weekend and particularly following the comments from Boris Johnson, plus newspaper reports suggesting a lifting of the lockdown was imminent, there has been a feeling that observance of the restrictions in Wales was slipping too.

The TAC report shows that overall, and not including recent developments, 70% of people in Wales have followed the social distancing guidelines. Just 4% of those surveyed said they were not following any of the guidance. 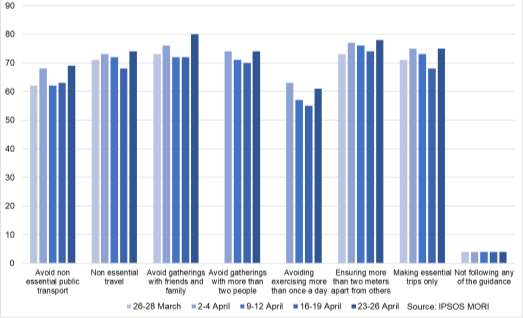 Mobility information has also shown large reductions in movement/travel in Wales since the middle of March.

In recent weeks there has been some increase but this could be due to the number of businesses that have re-opened rather than people breaking the lockdown. 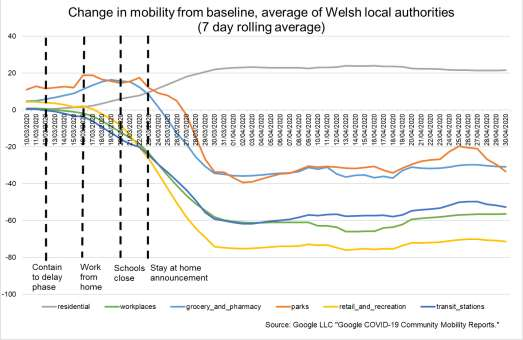 Public Health Wales has announced that a further nine people have died with coronavirus, bringing the total deaths in Wales to 1,099. A further 118 cases have been confirmed, bringing the total  to 11,121 overall. Health officials carried out 1,096 Covid-19 tests in the last 24 hours.

Rural Affairs Minister, Lesley Griffiths, has announced funding is to be made available to help Welsh dairy farmers.

The dairy sector has been struggling with the financial impact of the global pandemic due to the closure of the food service and hospitality sectors.

The minister has confirmed eligible dairy farmers who have lost more than 25% of their income in April and subsequently May, will be entitled to up to £10,000 to cover 70% of their lost income. This will help ensure they can continue to operate without impacting animal welfare and the environment.

Announcing the support, the minister said: “The measures introduced so far will help provide some stability for the dairy sector, but I recognise there is a need to support those farms hardest hit by a situation which is primarily outside of their control.”

“Further details of the scheme will be announced shortly but I wanted to commit today to support this core group of dairy farmers with a payment to offset some of financial impacts they have experienced.”

Plaid Cymru criticised the Rural Affairs Minister for not telling them before the support package was announced on Saturday morning.

Plaid’s Rural Affairs spokesman Llyr Gruffydd tweeted: “Those of us who are there to scrutinise her are the last to be informed. Cynical and petty.”

Andrew RT Davies MS, the Welsh Conservatives Shadow Minister for Rural Affairs was also critical. Describing the announcement as “better late than never”, he said: “However, the announcement today is lacking any real detail; it’s another case from the Labour-run Welsh Government of ‘Let’s bang out a statement, and hope that gives us time to think up a plan.” 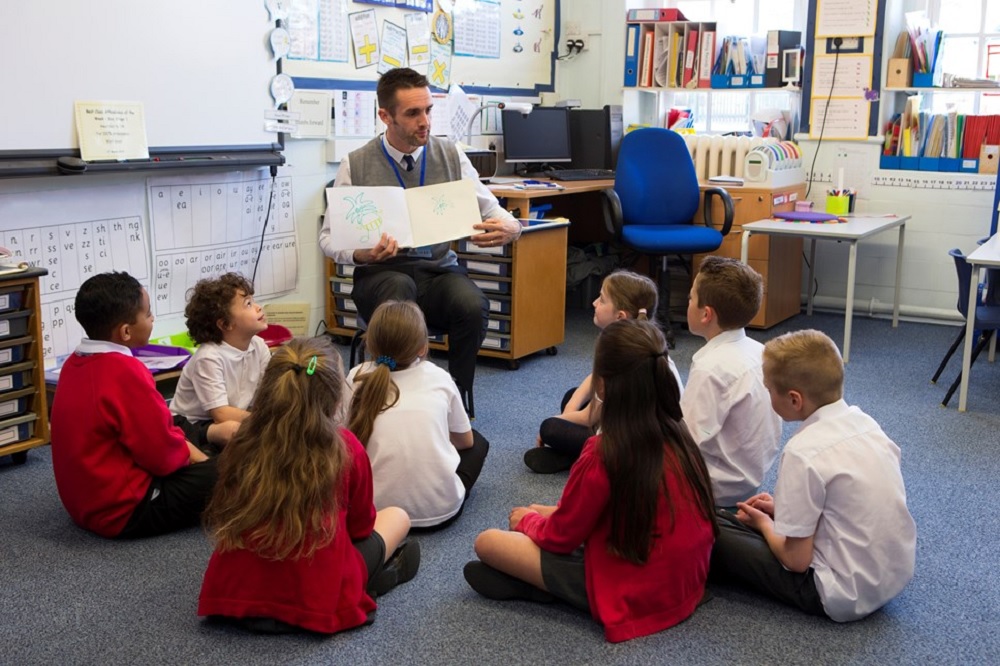 Picture by the Welsh Government

A risk assessment related to the new Curriculum Bill says that schools’ governing bodies rather than local authorities will have decision making power over school language policy when the new legislation applies.

Shadow Education Minister Sian Gwenllian MS warned that this function contradicts efforts made by local authorities to reach the Welsh Government’s long term aim of a million Welsh speakers by 2050  and called for “a thorough assessment” on the impact the bill will have on Welsh and Welsh language education.

She said: “Each governing body would be able to decide whether to follow immersion policies in the Foundation Phase, totally undermining many local authorities’ sound language policies, and would act as a serious blow to the development of Welsh-medium education across Wales.”