A teaching assistant in Swansea said her 77-year-old mother was a hero to her for continuing to work as a nurse in Ukraine.

Oksana Shapovalova grew up in Kherson, in the south of Ukraine, and that is where her mother has chosen to remain despite the city being occupied by Russian forces.

“She prefers to stay and feel useful,” said Ms Shapovalova. “She tells us not to worry, everything is okay. She tries to protect us.

“She says, ‘I can’t leave these people.’ Of course to me she is a hero. Shelling usually starts at 3am, and it’s very difficult to go out.”

Ms Shapovalova described Kherson as a strategic port city which has a population of around 400,000 people.

Situated in an agricultural region, the 47-year-old recalled “fields of gold” stretching into the distance as sunflower and wheat crops grew. Tomatoes and watermelon – the symbol for the area – were also in abundance.

Ms Shapovalova went to study in the capital, Kyiv, worked as a maths teacher there and met her husband Dmitri Finkelshtein – a lecturer. They have been in Swansea since 2014.

Determined to help since Russian President Vladimir Putin launched the invasion on February 24, Ms Shapovalova has arranged a delivery of medical aid and other supplies to be sent from her home in Sketty to Ukraine. And she has helped Sketty Park Community Centre dispatch two lorries of aid.

Ms Shapovalova is also trying to assist people she knows in her home country, including a former student – now a vet – who won’t leave the three racehorses she looks after near Kyiv.

A teaching assistant at Gower College Swansea, Ms Shapovalova has a 23-year-old son, who works in London, and a seven-year-old son at home. She said she was grateful to people in Swansea and the UK for their support of Ukraine.

She said food supplies were going to be affected not only in Ukraine but further afield because it wasn’t safe to sow crops there. 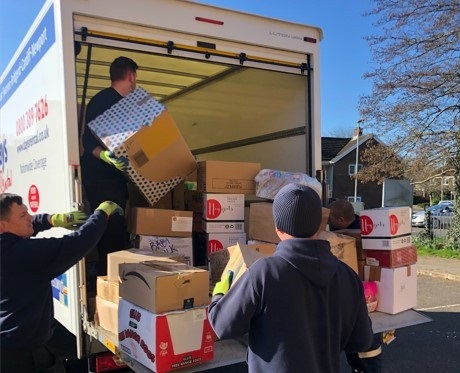 Asked how she thought the conflict would end, Ms Shapovalova said: “We hope someone will stop this crazy man (Putin) as soon as possible.”

The medical supplies from Sketty Park Community Centre were driven to distribution centres in Heathrow and London on March 8 and 17. From there they have been taken by road to Ukraine.

Nicola Furlong, co-chair of the community centre’s committee, said everyone involved had been staggered by people’s generosity.

“She reduced us all to tears,” she said.

Another committee member, Isobel Norris, said: “To hear first hand the challenges and dangers faced by her mum was very moving.”

The committee has thanked vehicle hire firm Days Rental and Swansea Council for their help to date.

Miss Fulong added: “While we are grateful for the help, we all wish it wasn’t needed.”

There seems little sign of a swift end to the destruction. Shelling of Ukrainian cities continues, civilians die.