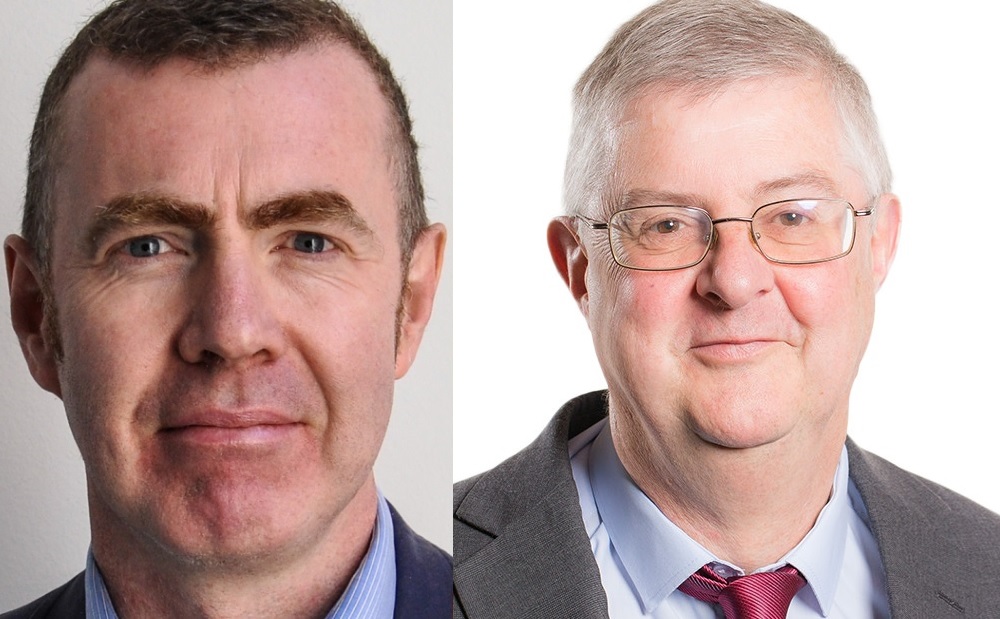 Following the general election debates over the last couple of days – and the problems he’s caused Labour in particular – Adam Price AM (Plaid, Carms. E. & Dinefwr) was unlikely to focus on anything other than health.

Asking whether Labour’s UK Shadow Cabinet members should familiarise themselves with health issues in Labour-run Wales, he also touched on the future of the NHS given future trade deals which could result in additional private involvement. Why wasn’t Labour backing Plaid’s motion for a Welsh veto on trade deals (to be tabled tomorrow)?

“….can you say whether you believe it’s appropriate that your officials sought to involve the chief executive of Betsi Cadwaladr Health Board….in political matters by sharing the text of a Plaid Cymru motion in the Senedd with him, to which he responded with….’a suggested line to take’? He also states in his e-mail that the now-rescinded proposals to introduce unpaid breaks for nurses….are already operating in another Welsh health board. You have redacted the identity of the health board in question. Are you able to tell us which one it is? And before you say, ‘These are operational matters’, or ‘Blame it on the Tories’, are you prepared to acknowledge that….there is one person that is ultimately responsible….for the NHS, and it’s you?”
– Adam Price AM

The First Minister focused more on how questions were asked rather than the substance. He said the Cwm Taf maternity scandal deserved a more considered response from Adam Price, who was “running Wales down” by “touring television studios”. While he expects, or hopes, a Labour UK Government would prevent the need for any measures to protect the NHS from trade deals, he’s answerable on the state of the Welsh NHS every week in the chamber (but let his bad temper get the better of him):

Stale PISA?
Both the Leader of the Opposition, Paul Davies AM (Con, Preseli Pembs.) and Mark Reckless AM (BXP, South Wales East) asked questions on the PISA 2018 results.

Paul Davies noted that while improvements have been made, the results in 2018 weren’t statistically significant from 2006.

“Despite the hard work of those in the teaching profession, Wales’ science scores are still significantly worse than 2006; Wales is ranked bottom of the UK nations in reading, maths and science; and Wales is the only UK nation to score below the OECD average in all PISA measures. It’s quite clear, First Minister, that you and your Government are failing to significantly improve Wales’ education system.”
– Leader of the Opposition, Paul Davies AM

Mark Reckless AM took a slightly different view, saying the difference between the Welsh score and the OECD average in maths and science was only fractional but was more significant when it came to reading. He noted concerns from headteachers regarding shortages of textbooks and other teaching materials.

The First Minister was, as you might expect, more upbeat about the performance than the Tories. The results had to be looked at in the round and the reforms to education in Wales were amongst the most ambitious anywhere in the UK. On reading, the First Minister pointed towards the relatively poor performance of male students.

“There is evidence in the figures of Wales’s relative improvement over time in reading….but we recognise, of course, that there is more that we need to do, particularly in tackling the phenomenon, which is true internationally, it’s true in every single OECD country, that young women outrank young men when it comes to reading. That is a more challenging problem in some parts of Wales, and there’s more that we will want to do, and our new curriculum, we believe, will help us to do that.”
– First Minister, Mark Drakeford

Improvement in Welsh PISA scores, but still some way to go

There was mainly good news and some bad news in the latest round of OECD PISA test results – which were taken by 15-year-olds in 2018.

The tests are the gold standard by which education systems are compared nation-to-nation, having become something of a political football in Welsh politics over the last decade due to falling scores compared to the rest of the UK and some of the world’s major economies. Here’s my previous commentary on the 2012 and 2015 results.

The tests examine the practical application of knowledge gained in the classroom in reading, mathematics and science.

Welsh students achieved their best scores in mathematics and reading since Wales began participating in PISA in 2006. While science scores are way down on where they used to be, there’s still been an improvement. Wales’ scores have improved faster than the OECD average, building upon 2015’s turnaround. Everything’s heading in the right direction for once.

The gap with the rest of the UK has closed a little bit and Wales has caught up with Scotland and Northern Ireland on mathematics and science to the point where there’s little difference.

Of the 79 nations and regions taking part in the test, Wales would be ranked around 29th in reading (similar to Switzerland and The Netherlands), 31st for mathematics (similar to Italy and Luxembourg and ahead of the United States) and 29th in science (similar to Norway and Austria).

Across the board, Wales’ performance is near enough identical to the international average.

The gap in performance between the least deprived and most deprived students in Wales was also said to be low, meaning students from disadvantaged backgrounds are more able to overcome those disadvantages. Girls have closed the gap with boys in mathematics.

Being bang average is probably a good thing considering Wales’ performance since 2009, but it’s still what it is – not great, not terrible. There’s room for improvement.

In 2017, the target for Wales to achieve a 500-point average across all three subjects by 2021 was dropped. Despite the improvement in 2018 it’s likely that, at the current pace of developments, the target would’ve been missed – though not by much.

We also have some way to go to completely close the gap with the rest of the UK. The UK as a whole is ranked 14th of the 79 nations and regions taking part, driven mainly by the performance of English students, who out-performed Wales across the board. Wales also continues to lag behind Scotland and Northern Ireland in reading.

44% of Welsh students said they rarely or never read books, despite believing themselves to be more confident than the OECD average in being able to understand difficult texts (suggesting a big shift to digital reading).

The areas with the highest concentration of local areas within the bottom 10% on measures of deprivation include Blaenau Gwent, the upper Rhondda and Rhymney valleys, Merthyr Tydfil, inner-city areas of Newport, Swansea and Cardiff as well as west Rhyl in Denbighshire.

“Spreading prosperity and tackling poverty is a priority commitment for this Welsh Government but we are working against the severe and unhelpful backdrop of a decade of austerity. There is no doubt that challenges remain but we will continue to fight tirelessly for a more equal and prosperous Wales where everyone has the opportunity to thrive and succeed.”
– Economy & Transport Minister, Ken Skates (Lab, Clwyd South)

Average rail fares set to fall by 1.1% on Transport for Wales routes….with a catch

Transport for Wales has said that average fares across the Wales & Borders franchise will fall by 1.1% from January 2020, with cuts to fares on longer journeys and journeys from the Heads of the Valleys area to Cardiff. Journeys within north Wales will see fares cut by up to 10%, while there will be additional benefits for youth concessionary and student cardholders.

However, shorter commuter journeys into the capital from places like Pontypridd and Caerphilly are expected to result in an average fare increase of up to 2.8%.

Regulated rail fares across the UK network, by comparison, are set to rise by 2.7% on average in January.

“We have already invested significantly in climate change adaptation and preparing for the future, through a wide range of policies, programmes and interventions and this plan further demonstrate our ambition to deliver a more prosperous, equal and greener nation.

“Delivering our plan will be a challenge, but we must all adapt and we must all commit to protect our nation for current and future generations. Success will mean Wales is a climate conscious nation, aware of the risks facing us, whilst being prepared and ready to adapt to the impacts before they occur.”
– Environment, Energy & Rural Affairs Minister, Lesley Griffiths (Lab, Wrexham)

The plan includes, amongst other things:

“Adam Price running Wales down by touring television studios ” says Drakeford. Wise guy indeed. More appropriate perhaps to comment that Labour is running Wales down by persistent failure to adopt sound policies combined with horrifically inept operating practices. Duffers all round. My only bicker with Adam is that Plaid have been woefully slow to kick Labour hard and often when they have been evidently serial failures for so long.

Get stuck in Adam You’ve got 8 more days to do some serious damage especially if they field seriously ill informed opponents like the dull Burgon against you.

Thanks for the update Owen!!

Political interference, being forced to be taught in a defunct language, is the reason why Welsh children lag behind.

Dave Brooker are you ill informed or just racist. There are 200 comprehensive schools in Wales fifty, just 25% are Welsh medium/bilingual. In the recently released Times list of top ten Welsh comprehensives four of the ten, 40%, including the first and third placed schools are Welsh medium/bilingual, I’d say thats a pretty good achievement by any standard, especially considering Welsh medium education is still in its relative infancy. Many non Welsh seeking parents are now choosing to send their children to Welsh medium schools because those schools provide a better standard of education than English medium schools. The reason… Read more »

How could someone be racist about a language?

How do you explain the dismal Pisa results?