Maternity services at Merthyr Tydfil’s Prince Charles Hospital and Llantrisant’s Royal Glamorgan Hospital were placed into special measures yesterday, following the publication of a joint report from the Royal College of Obstetrics & Gynaecologists and Royal College of Midwives into 43 separate “incidents”, some of which involved the deaths of babies (pdf).

A separate report into patient experiences was also published (pdf).

A report by Healthcare Inspectorate Wales has already found that serious staffing issues at the hospitals were at least partly to blame.

The incidents happened prior to Bridgend’s recent move into the Cwm Taf Morgannwg health board and it’s worth stressing that maternity services at the Princess of Wales Hospital haven’t been placed into special measures.

The Conservatives and Plaid Cymru have both called for Health Minister Vaughan Gething to resign over the issue.

Plaid has also laid a motion of no confidence in Mr Gething, which will be debated next week, saying the “distressing” report into Cwm Taf was “part of a wider pattern of failing”.

Defending his record during Health Questions on Wednesday Gething, told AMs it was incorrect to say no progress has been made where health boards have received interventions; some departments in the Betsi Cadwaladr board have been taken out of special measures.

With regard to Cwm Taf, the seriousness wasn’t apparent in previous reports and it’s only now the full picture has emerged. He wasn’t Health Minister for the whole time there were problems there and it was his responsibility to see through the intervention:

Yesterday, the Minister and other AMs had a chance to give their immediate response to the reports.

All health boards need to provide maternity assurances within a fortnight

“I want to start by reiterating my apology to all the women and families affected by the failings and poor care described in the report. There is no doubt the service provided to many women and their families fell well below the standard that I or anyone else would and should expect from our NHS.

“….I can’t begin to fully understand the impact for those who have experienced unsafe or uncaring practice. Like most parents across Wales, our family’s experience of maternity services was a positive one – one that every parent has a right to expect….I’m determined to ensure that this report is a catalyst for immediate and sustained improvement.”
– Health Minister, Vaughan Gething (Lab, Cardiff S. & Penarth)

The Minister added that the reports were a clear call to action and he fully accepted all recommendations. An independent panel will be set up within Cwm Taf Morgannwg to undertake a full clinical review of the 43 incidents, chaired by former chair of the Wales Ambulance Trust and Chief Constable of Gwent Police, Mick Giannasi.

He also expected all of Wales’ health boards to take the report’s recommendations into account with regard to their own maternity services and he wants assurances from them within a fortnight.

Darren Millar AM (Con, Clwyd West) said the reports made grim reading. The culture is ultimately set by the leadership and he was particularly dismayed that issues weren’t reported to the Welsh Government sooner; the integrity of managers has to be questioned and individuals should be held to account.

The Minister accepted there aren’t enough midwives, but there was less of a problem with doctors – more so their behaviour.

Helen Mary Jones AM (Plaid, Mid & West Wales) added that while the report cited examples of good work within the health board, she wasn’t convinced the Health Minister was best placed to deliver on the two reports’ recommendations. There’ve been nine separate reports raising issues between 2012 and 2018 and numerous warnings from AMs. Given the experiences of Betsi Cadwaladr health board, special measures don’t, in itself, necessarily solve problems either.

Look at every complaint

“I’ve been in two minds all day as to whether to speak this afternoon, but I feel it would be wrong for me to sit here as someone who herself had really poor care from Cwm Taf health board when I had my first child and say nothing. I have largely tried to blot out my experiences in Prince Charles Hospital with my first baby, but suffice to say that the stories that I’ve read in these reports about mothers feeling ignored, not listened to, dehumanised and made to feel worthless are ones that I very much can relate to.”
– Lynne Neagle AM (Lab, Torfaen)

Leanne Wood AM (Plaid, Rhondda) suggested a class-based prejudice (inverse care law), where those with the most need for medical care are the least likely to receive it:

Both Dawn Bowden AM (Lab, Merthyr Tydfil & Rhymney) and Andrew RT Davies AM (Con, South Wales Central) wanted assurances on governance arrangements and stability – though the Minister told them that while immediate improvements are necessary, it can’t always be done quickly.

Vikki Howells AM (Lab, Cynon Valley) highlighted two key themes – poor record keeping (such as patients being expected to pass information on verbally) and specific challenges relating to the socioeconomic background of the health board area.

During Wednesday’s Health questions Shadow Social Care Minister, Janet Finch-Saunders AM (Con, Aberconwy), described the situation regarding social care funding in Wales as “serious”. A clear vision for the future was needed, not the continuous rhetoric in the chamber. A new model for funding social care has been proposed in England as a pension-style system; what was being done in Wales?

The Minister said it was an unavoidable reality that the Welsh budget has been cut due to UK Government austerity. More progress on the future of social care would’ve been made if the UK Government “had been an honest dealer in this”. The short-term solution was to end austerity in order to boost local government budgets.

“The situation with the Countess of Chester Hospital, which took a significant number of referrals from north-east Wales, is going to make waiting times longer and more difficult to achieve in terms of the targets. When will you wake up, make sure that the Countess of Chester Hospital gets the funding it needs to care for the Welsh patients that need access to that service so that we can get these waiting times down, and when will you sign off the orthopaedic waiting time plan, which has been sat on your desk for 18 months, in order that these patients can get access to the treatment they need within the waiting time target?”
– Darren Millar AM

The Health Minister said there was no agreed orthopaedic plan – and he was as frustrated as Darren in terms of waiting times and the length of time it’s taking for a plan to be finalised. He rejected any suggestion Wales was behaving inappropriately towards Chester Hospital; “each and every year, the Welsh system has paid its bills in full and on time.” 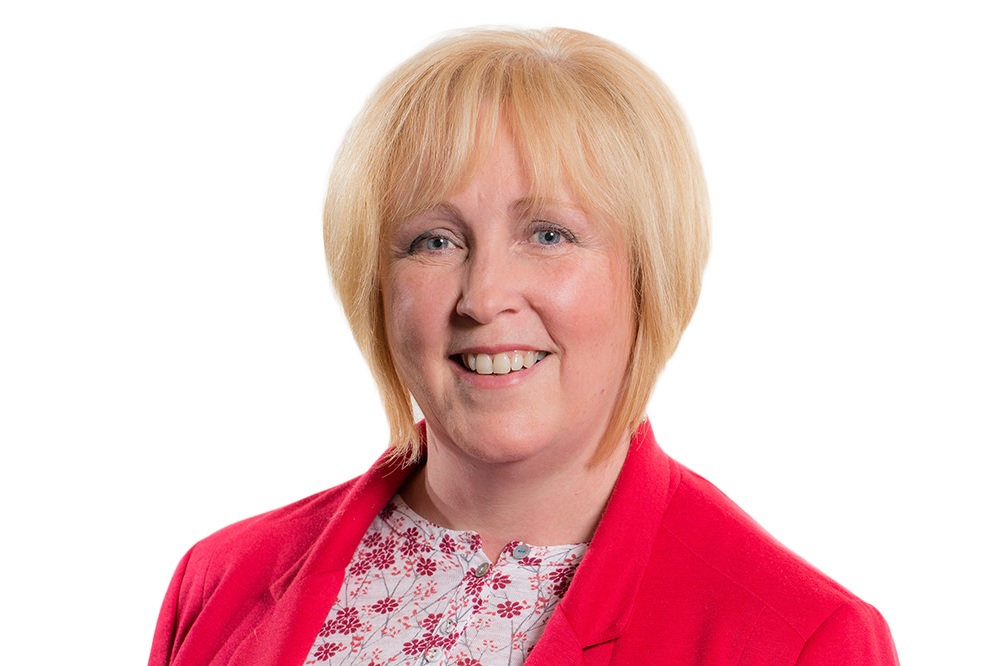 Shadow Education and Welsh Language Minister Suzy Davies AM. Picture by the National Assembly (CC BY 2.0)

Here’s a round-up of this afternoon’s Education Questions.

Following the publication of the draft Curriculum for Wales yesterday, Shadow Education Minister, Suzy Davies AM’s (Con, South Wales West) impression was that this was going to be a wholesale change of philosophy, with less emphasis on course content and more freedom for teachers. Naturally, this comes with quality control concerns:

“I will support the aims of a curriculum, which helps raise young people who are resilient, compassionate problem solvers who recognise the imperative to contribute their talents to society…. But they will also need a depth of subject knowledge based not just on their own experiences and choices. This is not a content-based curriculum that was repeated a number of times yesterday, but it will have content-based to a significant degree on staff and pupil choice. How will this proliferation of content be quality controlled?”
– Shadow Education Minister, Suzy Davies AM

The Education Minister believes the new curriculum wasn’t devoid of knowledge but builds upon it. There are still expectations of where a child should be at the different progression points (which will replace Key Stages) and Estyn will be undertaking more inspections to ensure the curriculum is being properly implemented – though the changes will be phased in gradually to prevent overburdening schools and learners.

Suzy is also an outspoken campaigner for life-saving skills to be taught in schools and was disappointed by the Minister’s decision not to make CPR lessons compulsory; the Minister said it was ultimately for schools themselves to decide how and when to provide first aid training.

Bethan Sayed AM (Plaid, South Wales West) raised the issue of tuition fees for EU students after Brexit. It’s been reported that England intends to raise fees for EU nationals from 2021. While the Welsh Government has committed to maintaining the current fees until then, what was their position afterwards?

“Firstly, let me be clear that I want as many students from the EU….to to come and study at our universities….f I can just clarify to the Member, it is not our own budgets that are pertinent to this point, we need to have confirmation from the Westminster Government about the provision of loans. If that does not come forward, the Welsh Government would have to guarantee around £45 million of support to EU students to ensure that they will have the funding in place for the entirety of their study.”
– Education Minister, Kirsty Williams (Lib Dem, Brecon & Radnor)

School hours “should be decided locally”

There were two questions on school hours. Caroline Jones AM (Ind, South Wales West) raised the matter of several schools in the Bridgend area giving consideration to cutting school hours (and subsequently break times). Joyce Watson AM (Lab, Mid & West Wales) said a number of schools in her region now close early on Fridays for additional teacher training. In both cases, there were concerns over the impact this will have on working parents and pupil welfare in terms of playtime and physical activity.

The Minister said it was ultimately a local decision:

In response to a follow-up question from Helen Mary Jones AM (Plaid, Mid & West Wales), the Minister cited research which suggests that “asymmetrical school weeks” with reduced break times can have a positive impact by reducing opportunities for bullying and horseplay.