Plaid Cymru leader, Adam Price AM (Plaid, Carms. E. & Dinefwr questioned the First Minister about the High Court ruling last week that former First Minister, Carwyn Jones AM (Lab, Bridgend), unlawfully interfered in the QC-led inquiry into the circumstances surrounding the dismissal of Carl Sargeant prior to and immediately following his death in November 2017.

He asked if the Welsh Government accept they unlawfully interfered? Would the Sargeant family receive an apology? Would it be converted into a statutory public inquiry?

“I can confirm that the Welsh Government accepts the judgment of the High Court in full. I can confirm I first became aware of the terms of the judicial review and the issues at stake on it when I was briefed on becoming First Minister. I can also confirm I’m in the process of receiving advice on what the judgment says and the courses of action available to me. As soon as I’m able to resolve those issues, I’ll issue a statement to the Assembly setting out my decisions.”

Leader of the Opposition, Paul Davies AM (Con, Preseli Pembs.), said GPs were in crisis:

“The BMA in Wales spoke out at the weekend with what they called sadness over how recent contract negotiations with your Government had gone. Chairwoman of the general practitioners’ committee, Charlotte Jones, said your overall approach had been disappointing and that the result…fell well short of a deal where the committee could actually look doctors in the eye and say it was good for the profession.”

– Leader of the Opposition, Paul Davies

He added that weren’t only GP problems, but falls in the number of midwives, nurses and visiting staff too.

The First Minister said GPs have been offered a 5.4% raise in the 2019-20 contract and talks will resume to discuss alternative ideas. Employment in the Welsh NHS was at record levels (92,500 staff) with increases in doctors, consultants, scientific/technical staff and ambulance staff – but this was conveniently overlooked by the Tories.

Llyr Gruffydd AM (Plaid, North Wales) asked for a statement on nuclear waste burial. Radiological waste disposal is a devolved matter, but it was unclear whether this related to nuclear energy – which was reserved to the UK Government.

Mark Isherwood AM (Con, North Wales) said the decision as to where to bury the waste would ultimately be determined by geology. Has there been any discussion with six locations identified in England?

“The Welsh Government has not identified any sites or communities where geological disposal of radioactive waste could take place, and there is no intention to do so. A facility can only be built in Wales if there is a community willing to host it, and it secures full planning, safety and environmental consents.”

The First Minister added that, as far as he knows, geological disposal of nuclear waste is devolved. It shouldn’t be left for future generations as the mess is already there. There hasn’t been any engagement with any particular locations as – referring to his earlier answer – it would be down to communities to come forward voluntarily; the entire process of getting an agreement could take 20 years from start to finish.

31% of the Welsh population unaware of Welsh income tax

“The introduction of the Welsh Rates of Income Tax represents a significant increase in the portion of taxes paid by Welsh taxpayers which are decided in Wales.

“But we are concerned by the evidence, including constituency feedback and the Committee’s own indicative poll, which suggested a disappointingly high proportion of the population were as-yet unaware of the impending implementation of Welsh rates of income tax.”
– Committee Chair, Llyr Gruffydd AM (Plaid, North Wales)

From this Saturday (6th April), a proportion of income tax will be raised and decided in Wales, which is estimated will make up around £2billion of Wales’ ~£16billion devolved budget. In the 2019-20 Welsh budget, the rate of Welsh income tax will remain unchanged at 10% for all income tax bands.

The cost of establishing the Welsh Revenue Authority – the body responsible for devolved tax policy – has fallen within the estimated budgets. They also haven’t had any problems in recruiting qualified staff – though they mention problems in retaining seconded staff for the medium-term.

The implementation of landfill disposals tax and land transaction tax (the replacement for stamp duty) also seems to have happened without any problems.

The person who oversaw the introduction of fiscal devolution – the Welsh Secretary, Alun Cairns MP – has refused to give evidence to the Committee and would only do so on an individual AM-by-AM basis, something the Committee describes as “particularly frustrating”.

According to a Welsh Government-commissioned survey in June 2018, just 24% of people in Wales were aware of the forthcoming Welsh Rate of Income Tax. This was before notification letters were sent out (in November 2018).

Following this awareness work, the Committee undertook their own surveys on social media which found that the awareness levels had increased to 69%, though this still meant 31% didn’t know. It’s worth pointing out the sample size was pretty small at 356 people. 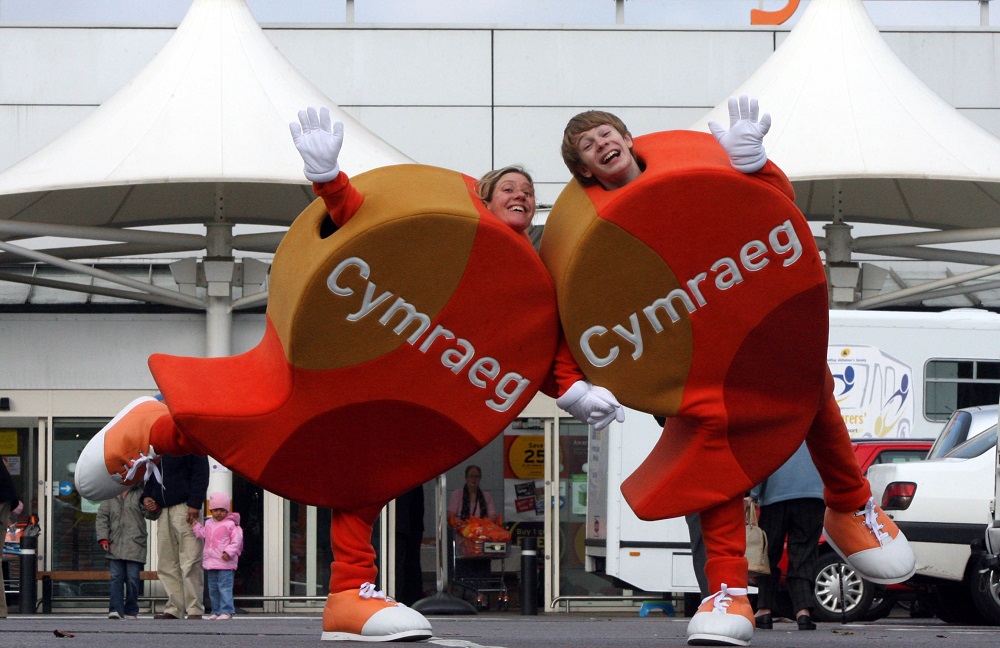 Number of Welsh-speakers “has increased gradually” since 2008

The first annual report of the Welsh Governments Cymraeg 2050 strategy ( pdf– Cymraeg; pdf – English) has suggested that the number of Welsh-speakers has gradually increased since 2008, with the annual population survey putting the number of people over the age of 3 who can speak Welsh at just under 870,000.

The number of Year 11 pupils studying the full second language Welsh course has also increased, rising from 26% in the 2008-09 academic year to 36% in 2018-19. The Welsh Government intend to end teaching Welsh as a second language as part of National Curriculum reforms.

Ukip Leader suspended and has pay docked for sexist video

In May 2017, Joyce Watson AM (Lab, Mid & West Wales) made reference to UKIP AMs “behaving like rabid dogs” during a debate. The following May, she was scheduled to travel with the Senedd’s Environment Committee to London but had to cancel at short notice, fully reimbursing travel costs to the Assembly Commission.

Using the “rabid dogs” comment a year earlier as part-justification (an example of an equalities champion being a hypocrite), Bennett published a Youtube video falsely accusing Watson of wasting public funds. He also described Watson as an “odd creature” and superimposed her head and shoulders on a woman wearing a low-cut Bavarian barmaid outfit:

“Joyce (Watson) once ran a pub in Pembrokeshire but you wouldn’t guess that from looking at her. She doesn’t look like the life and soul of the party. I’m not sure I would fancy popping in for a quick one at the local if I saw her pulling pints behind the bar.”

On May 8th 2018, Watson complained to the Standards Commissioner, Roderick Evans QC. To the bewilderment of AMs, the Commissioner decided the complaint was inadmissible on misogyny and sexism grounds.

Following complaints from three Labour AMs, in November 2018 the Senedd agreed to appoint an Acting Standards Commissioner – Douglas Bain – to re-open the investigation.

For a start, there’s the act of superimposing a pensionable-age woman into a sexually-suggestive outfit associated with a particular stereotype. Then there’s making derogatory comments about Joyce Watson’s appearance and also the double entendre of “popping in for a quick one (quickie)”.

Bennett had to be interviewed twice. In something that’s becoming a personal trademark, he flounced out of the first interview because “the atmosphere became too oppressive and I couldn’t deal with the situation” when questioned on whether Watson’s appearance had anything to do with political criticism. The Acting Standards Commissioner and the Committee interpreted this as non-cooperation.

He claims the video was about Labour despite all but 45 seconds of a 6 minute+ video being about Joyce Watson. UKIP staff and AMs found it funny that “someone as austere and joyless as Watson could once have been a publican”.

Bennett admitted he doesn’t run his own Facebook, Twitter and Youtube accounts and has never looked at them; something the Acting Commissioner described as “fairly reckless”.

He denied there was any double entendre, sexual innuendo or any suggestion of sexual promiscuity; it was entirely subjective.

Bennett – who’s a member of the Standards Committee – didn’t understand what his duties were under the Members Code of Conduct. He didn’t believe the Code of Conduct applied to behaviour between AMs.

Without irony, he used Article 10 of the European Convention on Human Rights (Freedom of Expression) to justify the video. While he (eventually) accepted some people will have had a problem, he didn’t believe he has a duty as an elected representative to avoid causing offence.

Politicians are expected to have “thicker skins” when it comes to criticism, but Article 10 of the ECHR doesn’t extend protection to abusive comments.

The images and comments in the video didn’t count as political criticism; it was “gratuitously personal abuse” which was also deliberately chosen and well-crafted.

He found it inconceivable that Bennett, a former journalist, didn’t know that “popping in for a quick one” was sexually suggestive.

There was a breach of 4(b) of the Member’s Code of Conduct, which states that: “Assembly Members should at all times conduct themselves in a manner which will tend to maintain and strengthen the public’s trust and confidence in the integrity of the Assembly and refrain from any action which could bring the Assembly, or its members generally, into disrepute.”

There was a further breach of 4(g) of the Member’s Code of Conduct, which states that: “Holders of public office should promote and support these principles (of public life) by leadership and example”. Bennett also breached the Senedd’s Dignity and Respect Policy.

The Acting Commissioner raised a number of points of principle, including the difficulty members of the public might have in interpreting the Code of Conduct; making co-operation with standards investigations by AMs a duty (Bennett apparently failed to collect a summons); providing victims of misconduct with a copy of the report, not just the complainants.

The video fell well below the standards of behaviour expected of an AM and was “a severe breach of the Code of Conduct”.

For flouncing out of the first meeting with the Acting Standards Commissioner, they recommend Bennett pay £500 to cover the cost to taxpayers of holding a second meeting.

Subject to the Senedd’s approval, the Committee recommends Bennett is censured and suspended for 7 days without pay starting 29th April 2019.

They also recommend that for not apologising, Bennett is removed as a member of the Standards Committee. They say, “In a climate where we are trying to ensure everybody feels empowered to come forward and raise issues and concerns about inappropriate behaviour, we do not believe his continuing membership of this Committee, for the duration of this Assembly, is appropriate.”