Tories’ reliance on working-class in Wales and elsewhere making them less a party of business, think tank director says

The Tories’ dependence on working-class voters in Wales and elsewhere mean they have moved away from being the party of business, the director of communications at one of the UK’s leading free-market think-tanks has said.

Annabel Denham of the Institute of Economic Affairs (IEA) said that the shift in the demographics of Conservatives voters post-Brexit meant that they had moved away from “the conditions that allow businesses to thrive” and that they needed to reclaim their mantle as “the Party of Business”.

“The political realignment that has been underway since 2010 has left the Tories dependent on working class voters in Wales, the Midlands and the North – meaning their change in economic orientation and philosophy may not be a temporary, Covid-driven blip,” she said.

“For those who believe the best prospects for recovery lie in unshackling entrepreneurs, this is a grim prospect.”

The Conservatives won an additional six seats at the 2019 General Election, taking their total to 14.

But Annabel Denham said that the dangers of a leftwards economic shift could not be underestimated, as last summer “polling revealed two-thirds of under-40s want a socialist economic system”.

Writing in the Telegraph, she said that the party could not blame “nationalising railways, bailing out defence contractors or signing us up to a global minimum corporation tax” on the Covid pandemic.

The Institute of Economic Affairs describes itself as “the UK’s original free-market think-tank” and said that its aim was to “promote the intellectual case for a free economy, low taxes, freedom in education, health and welfare and lower levels of regulation”.

But after over 10 years of Conservative government the “total tax take as a proportion of national income is at a 71-year high, on par with Clement Attlee’s post-war socialist government,” Annabel Denham said.

“After ‘getting Brexit done,’ the stage was set for incinerating anti-business EU bureaucracy. But rather than ignite a bonfire of red tape, policymakers are finding new and creative ways to hamstring businesses with pettifogging regulations, like banning ads on yoghurts or jam,” she said.

until the tories start increasing tax on unearned income, investments and corporation tax and cutting tax on wages and national insurance, they are no friends of the working class. Communist Russia had Pravda, Nazi Germany had Der Stuermer, tory ingland have the Telegraph.

It does rather look as if Ms Denham has spent too much time in her Think Tank (which is secretly funded by very rich right wingers if I recall correctly). She has not noticed that the key members of the De Piffle cabinet are all confirmed Randians (i.e Followers of Ayn Rand the US extreme right wing author). Most were behind the dreadful pamphlet called Britania Unchained in which they assert that British workers are the laziest in Europe along with a host of other unfounded assertions. So no, Ms Denham you have got it wrong. The De Piffle regime… Read more »

So the new year brings with it more disorientated scribblings from a big business lobbyist. These are the tvrds for whom a low tax economy isn’t enough, they have to get a regular dose of grants and other handouts to prove that government is “business friendly”. No better than the benefit “scroungers” they so loudly despise, and far less deserving in most cases.

P.S I believe in free enterprise and an open market economy but what now prevails in the UK and the wider world are rigged markets dominated by manipulative globalist corporates and institutions.

The Tories only give the impression they are now the party of the working class – they aren’t and never will be. They’ll change their skin like a chameleon all in the name of gaining votes and retaining power. They are not the party of you or I they are the party of the rich and big business and always will be.

It’s not a think tank, that would require some actual thinking.
It’s a free marketeer mutual appreciation and self-justification society

The Conservatives are and will forever be the nasty party. They are rotten to their centrist core.

Boris Johnson might have fooled some in working class communities with populist rhetoric and false promises to get their vote but be assured he is on borrowed time. The clown has removed his make-up to reveal an unfunny manipulative liar.

It’s a soundbite which might work with older voters but how stupid do they think we are? The UK government might be more interested in “big government” now but the ideas are still very much right wing ideas of how to spend money and it’s showing.

Shouldn’t each political party both be the party of business and non-business anyway? Shouldn’t they try to act on behalf of everyone and just have different ideas of how best to do that?

Should the IEA be trusted? See analysis of links below: 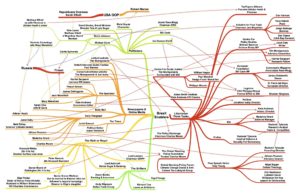