A Tory councillor who took offence at a tweet that described his party as “f*****g awful,” has had his support of Donald Trump questioned.

Cllr James Evans who represents Gwernyfed on Powys County Council pointed out the message posted on Twitter by Liberal Democrat councillor Jackie Charlton, who has since deleted and publicly apologised for the tweet.

But Cllr Evans has now been called out by Cllr James Gibson-Watt, leader of the Powys Liberal Democrat and Green group, about his views on the 45th US President.

Back in October, before the Presidential election and when Mr Trump was recovering from Covid, Cllr Evans tweeted: “Wishing @realDonaldTrump a speedy recovery! Hope he is back fit and well to win a second term.”

At the time of his tweet Cllr Evans was a member of the ruling Conservative/Independent Cabinet. In November, the Brecon and Radnorshire Conservative Association adopted him as their Prospective Senedd Candidate for this year’s election.

Since then, Mr Trump lost the Presidential election, but refused to concede defeat. He has attempted to overturn the result by making false claims of electoral fraud, and has mouted dozens of unsuccessful legal challenges.

His obstruction of the presidential transition climaxed by urging his supporter to march on Capitol Hill in Washington DC.

There, on 6 January they stormed the building  forcing Congress to temporarily evacuate, postponing the counting of the electoral college votes and resulted in the deaths of five people. 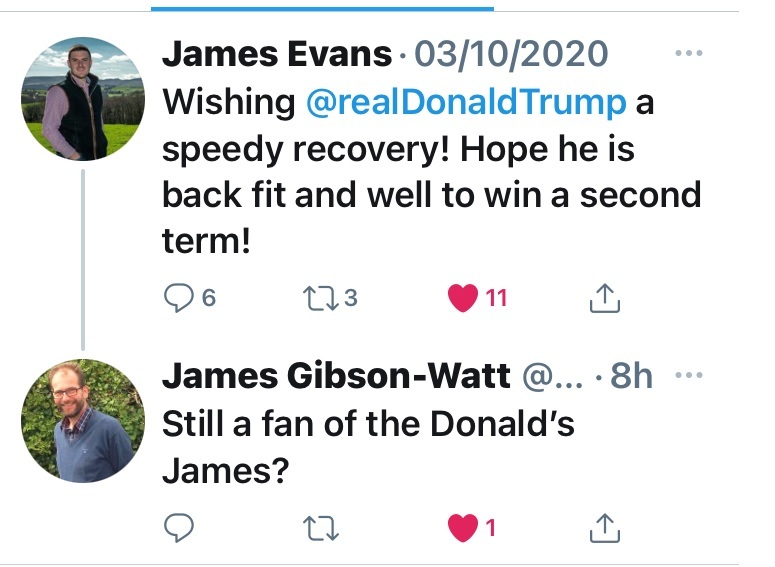 Cllr Evans told the Local Democracy Reporting Service: “I never have, and never will condone violence of any kind.

“The scenes on Capitol Hill were shameful and totally unacceptable.”

Powys County Council said they were unaware of any complaints made about either tweet.

“Complaints against councillors should are referred to the Public Services Ombudsman for Wales.”