Twitter has suspended a user for “hateful conduct” after publishing a completely innocuous tweet in the Welsh language.

Dr. Sara Louise Wheeler, who is a guest research fellow at Wrexham Glyndwr University, was told she had “violated” Twitter’s rules against hateful conduct after tweeting about Welsh grammar.

“I want Welsh that that doesn’t need to be corrected,” she tweeted in the language. “I’ve tried reading loads of Welsh grammar books over the last twenty years – but I just don’t learn that way.

“But as I said tonight I can remember the songs in performances. Aran Jones is going to try and harness this.”

Twitter however declared her tweet hateful conduct, saying: “You may not promote violence against, threaten or harass other people on the basis of race, ethnicity, national origin, sexual orientation, gender, gender identity, religious affiliation, age, disability or serious disease.”

Taking to Instagram after being suspended from Twitter, Sara Louise Wheeler expressed bemusement that she’s been banned for tweeting about Welsh grammar.

“Suspended in Twitter for tweeting in Welsh about my struggles to learn Welsh grammar,” she said.

Others on Twitter rallied in Sara Louise Wheeler’s defence.

@SerenSiwenna has been temp suspended for this completely innocuous tweet about Welsh grammar. Sort yourselves out @TwitterSupport pic.twitter.com/tHlyKeHmJu

I’m not surprised. I used to use Twitter a few years ago but left because when I flagged actual racist users and offensive imagery uploaded noticed it rarely was taken down. So on hearing this was amazed to see this stupefying overreaction to this inoffensive post.

Surely whoever moderates Twitter can discern between a hostile tweet that’s hateful and one that’s innocuous like Dr. Sara Louise Wheeler who innocently posted about Welsh grammar?

It was most likely a bot decision. Possibly one or two words match the pattern of offensive speech in another language. (You don’t seriously think social media has actual human beings doing the moderation do you?)

The world needs to learn more Cymraeg, not less. Written in Saesneg by a North American man with the birth surname “Jones”. I am Cymro via the inter webs! 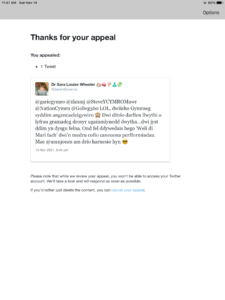 Amazon removed my review of a Welsh book in Welsh – but this is truly ludicrous.

Blimey! That’s worse I think…they’re not under pressure in the same way as social media to control things on their platform 🤷🏼‍♀️

LOL! Or certainly one to help them tweet their algorithms 🙈

Twitter doesn’t act on anti welsh tweets and racial terms used toward Welsh people, interesting. Mind you some people on Welsh twitter are out there spewing hate too.

No surprises here. All these global tech corporates have their templates for the “ideal” global end game and they do NOT include minority languages or cultures. These are the real new faces of fascism, a totalitarianism delivered by corporations who wield more power than many countries. Their tech is intrusive and enables an unacceptable high level of surveillance.

Big Tech is pure cultural imperialism, a means to dictate that the whole world follows the norms of wacky San Francisco. Not only do they frown on any language other than English, but they even clamp down on non-American English: viz the debacle a couple of years ago about the censoring of a tweet about famous and peas.