Elder Steven Kellogg, pauses, and cracks a grin. He likes to make jokes about everything, including his own name. ‘Elder’, however, is not a name but a temporary title; he’s using it in place of his forename for two years of his life.

Elder Kellogg is sitting with me in a quiet classroom in a chapel in Gaerwen, Anglesey. Unlike Church of England or Catholic chapels, this building is usually closed throughout the week and has no ornate architecture or stained glass.

The building belongs to Church of Jesus Christ of Latter-Day Saints. Its members are colloquially referred to as ‘Mormons’.

Seated next to Elder Kellogg is his companion, Elder Derrick Wong. Elder Wong is from Malaysia, but he speaks English as his first language.

“I also speak Mandarin pretty well, and some Cantonese,” he says. “As for Malay… just a little bit. I mostly just understand it when I hear it.”

I ask Elder Kellogg if he also speaks four languages. “Yup,” he says, “I speak Arizonian, Coloradan, and Utahn.” A long pause. “And English”, he adds with a slight blush.

Elder Kellogg’s happy-go-lucky demeanour contrasts heavily with Elder Wong’s matter-of-fact way of presenting himself, but the two seem to share a peculiar bond.

They’ve known each other for only a month, but mission regulations mean they’re separable only by toilet breaks. Their schedule runs from 6:30 in the morning to 10:30 in the evening and the intervening time is filled with only sleep.

‘I had to make a decision’

Both Elders have been raised in the church. Their parents were converted by missionaries like themselves.

“Growing up in the church, you kind of just do what your parents do,” Elder Wong admits. “I started taking it seriously when I was in high school.

“That eventually drove me to as point where I had to make a decision about whether I was going to follow my beliefs or not.”

Elder Kellogg was also brought to a point, as a teenager, where he had to choose whether being a Mormon was the life for him.

“If you’re going to put this much time into something, you’ve got to know if it’s true,” he said.

“I prayed for myself, and that’s the answer I got. So I haven’t looked back.”

Both missionaries were assigned to work in Bangor the day they started working together. Missionaries are often reassigned every six weeks, but usually only one at a time.

Elder Wong and Elder Kellogg consider their assignment to Bangor to be a fresh start. But so far they’ve been met with limited success and much resistance. 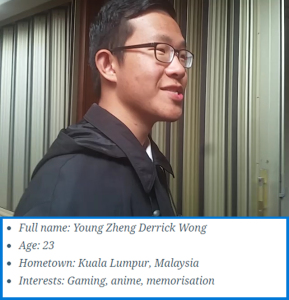 “We had a street display with twelve missionaries, and there was this drunk man. He came up, asking why we believe in God,” Elder Wong said.

“He started swearing at us in Polish. We tried to ignore him. Then we kindly invited him to go away.

“He went over to where a sister missionary was sitting and talking to someone, and he sat in between them. When she moved, he moved with her.

“When she stood up to walk away, he got very angry. He came back to our street display, he pushed the Elders around, and he flipped the table.”

Elder Wong pauses. “It was a very… interesting experience,” he says wryly.

“I was so glad we were safe” 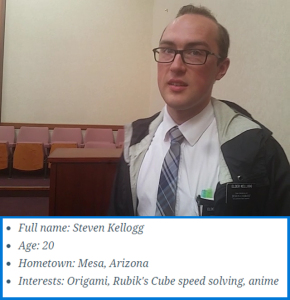 Elder Kellogg describes another experience with a harasser:  “We were knocking on doors and there was this man not too far from us on the corner of the block.

“He started cussing and calling us names. Eventually, he started screaming at us, saying ‘we don’t want you here’. He started walking up to us.

“At that point, the door we were knocking on opened, and it was a man who we’d previously met on the street. He was fascinated that I was an American—he invited us in to see the American flag he’d hung up on the wall.

“So we just walked right in and acted like we were super interested in it, at the same moment when this other man was coming right up to us.

“I was so glad we were safe, I don’t know what would have happened. We stayed there for a few minutes until he went away, and we got out of the neighbourhood as soon as we saw the coast was clear.”

‘I’ve learnt more about myself’

Neither Elder seems all too fazed by their reception. Elder Kellogg concedes that Bangor is a “tough area” for missionary work, but there’s a wonder in his eyes as he tells stories of the good and bad moments of his mission.

He’s only seen one successful conversion during his time as a missionary, but Elder Kellogg has a positive outlook on his year of missionary work.

“Just living with your companion, you learn a lot about independence. You do your own laundry, your own dishes, you cook for yourself,” he says.

“You’re also communicating with people every day. I’m still learning how to use my words, really, but the mission has been a big help.”

Elder Wong concurs: “I’ve seen more of the world. I left the safe bubble of my home, and I’ve learned more about myself.

“No matter what happens, I know that I’ve grown as a person. I want to see people accept our invitation, of course, but opposition has made me who I am today.”

This is a strange article. We’re in Gaerwen, yet the writer says, “Unlike Church of England or Catholic chapels . . . “. Churches, surely? And why no mention of Welsh Nonconformist chapels, which one would be far more likely to find in that part of the world? I get the impression that the writer is as much a stranger as the people he’s writing about. And if we’re talking of Mormons on Ynys Môn how can we not mention the most celebrated of them – Nathan Gill AM, MEP? And what of his extended family, the father/stepfather rather too… Read more »

“Unlike Church of England or Catholic chapels, this building is usually closed throughout the week and has no ornate architecture or stained glass.” As you may know (or not) Nonconformist chapels hardly ever have stained glass windows and are not ornate.

The term ‘chapel’ is used widely in Catholicism to refer to a small building where worship is carried out. In Ireland, especially in the North of Ireland, “I’m gong to chapel” is widely used by practising Catholics.

In Gaerwen, and throughout Wales, Anglican and Catholic places of worship are referred to as ‘churches’, not chapels. We are not in the North of Ireland.

Still, nonconformist chapels are not ornate. Catholic places of Worship are. This is the point being made. Learnt the phrase “hollti blew” yet Royston?

Splitting hairs is exactly what you’re doing. The writer said “Unlike Church of England or Catholic chapels”, and I pointed out that C of E and RC buildings in Wales are always referred to as ‘churches’. You then introduced ornate architecture and stained glass windows, suggesting they’re alien to Welsh Nonconformist chapels – you ever seen Tabernacle in Morriston? I repeat, I got the impression that whoever wrote that piece may not know a lot about Wales, and failing to mention the most notable or notorious Mormon in Wales was very odd. Seeing as you know my name, how about… Read more »

Please read the sentence again. I did not introduce them, the author did. You have somewhat of an obsession about shooting somebody down for not writing sentences that are ‘Welsh enough’, which I think is a bit silly. The Tabernacle in Treforys is a beautiful building, but is somewhat of an anomaly. It is you that seems not to have much knowledge of nonconformist architecture – Calvinist chapels are almost always austere, matching the Calvinist tendency of concentrating on the word of God and not the action / the image. The same can be said of Unitarian places of worship.… Read more »

Another major omission, in this article, is of the basic beliefs of Mormonism, which is quite different than standard Christianity, of the traditional Catholic, Orthodox, and Protestant varieties. These lot are in fact a a rather unusual sect. They aren’t proper Trinitarian Christians; they aren’t even truly monotheistic, but actually henotheistic. They believe that Native Americans were actually Israelites (Jews) who sailed to America, and their entire faith rests on the claim that, following the crucifixion and resurrection, Jesus Christ came to America; this claim is the basis of the Book of Mormon story.

Absolutely. About from the word “Anglesey”, this would be an article better referring to somewhere in England. It implies that the other main religions in the area are “Church of England” and “Catholic”. The slip up over “Church of England” rather than “Church in Wales” could be understood, if it were not for the fact that the rest of the writing displays the fact the author knows nothing about religion in Wales through leaving out non conformist chapels, as Jac o’ the North says. There is some rather odd hair splitting in response to what you say here – it… Read more »

Many Welsh people were actively recruited by the Mormon church in the 1800s and moved to the western United States. Some liked it; some didn’t. Several years ago, I read a book of letters home to Wales, some of which were written by these Welsh Mormon pioneers. I am sorry the previous poster seems to paint an entire group of people based on what is probably limited experience. As an agnostic, I can probably point to many practices from any number of religions that I find odd, but I never disrespect anyone who walks the walk of their chosen faith,… Read more »

Where is this from? Was it written specially for Nation Cymru? It does seem a bit “detached” from the Welsh experience, and seemingly written by someone with little knowledge of Wales – disappointing, considering the quality of some of the other articles published by Nation Cymru.

Is this the author of the article? Jesse Young. https://www.mormon.org/me/bhy6 This young man states that he is from Wales, yet he has an American father and an English mother. He is a “returned missionary” for the LDS church. In the “How I Live My Faith” section of his profile on the Mormon website, he states, “I was just recently made the PR representative, and so I’ll be getting our name out there in the local community via newspapers and such like. Considering I’m working towards a career in journalism, it’s perfect for me! I’ve always had an immense desire to… Read more »