‘Wales is not a principality’ – Financial Times criticised for error

A journalist from the Financial Times has come under fire for referring to Wales as a principality in an article.

Although broadly supportive of the move to increase the tax which Mr Drakeford said was not about being ‘nasty to people who have second homes’, but to allay the anxieties of first time buyers, the article went on to say: “Drakeford’s comments came as the Welsh government proposed making a one-off payment to NHS staff in the principality worth about £1,000 for the 2022-23 financial year, in an effort to end strikes by healthcare workers”. 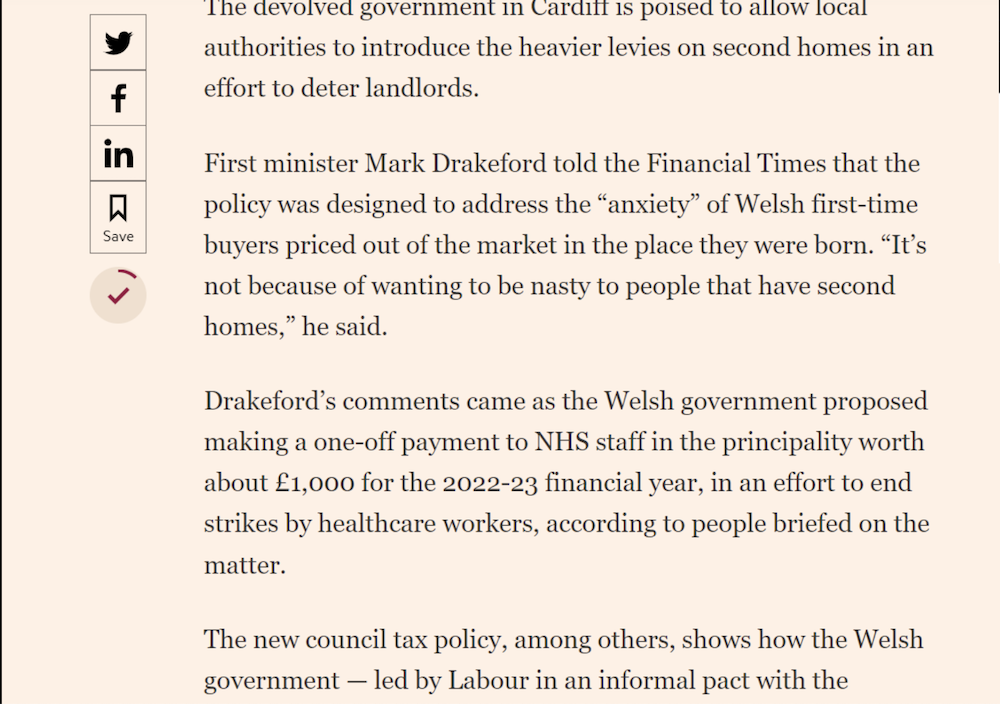 Jumping on the error, Twitter account @ThatsDevolved quickly trotted out a lesson in Welsh history pointing out that Wales is not a principality and has not been one or part of one for around 500 years.

Retweeting the original article, That’s Devolved said: “This article is incorrect. Wales is not a principality. The entirety of modern Wales was never part of a principality. None of Wales has been part of one since 1536”

This article is incorrect. Wales is not a principality. The entirety of modern Wales was never part of a principality. None of Wales has been part of one since 1536 #thatsdevolved https://t.co/6vUNeeeZa3

At the time of writing the FT have still not corrected the error.

He probably knew exactly what he was writing. The english love to do this as they know it stirs things up.

Connoisseur of Understatement
Reply to  Frank

Not necessarily. English schoolchildren are taught English history misrepresented as British history. Then they grow up, and get their information from ludicrously parochial news media. There’s plenty of good will towards Wales in England, but it’s hidden by ignorance. Mr Pickard’s article shows this dichotomy perfectly. For any English readers who are confused about the whole principality thing, two exercises may help you:— 1) Compare the duties of Henri Bourbon-Parma (in the administration of public services in Luxembourg) with the duties of Harry Mountbatten-Windsor (in the work of Sussex’s two county councils). Henri and Harry are both Dukes (well, Henri… Read more »

It doesn’t help that we have the word ‘Principality’ stuck on our national stadium. The sooner that deal ends the better and I’d like to ask that building society which principality is referenced by their name because there isn’t one on this island. There hasn’t been a legitimate Prince of Wales in over 600 years and no imposed ruling one in nearly 500 years. All holding the title since have been frauds. Not just my opinion, it’s a fact because in all that time, our country has not been RULED by one. It is a half millennia long, and counting,… Read more »

Every person since Owain Glyndwr Who has held the title POW has had no legitimacy over the Kingdom of Wales that was unified in 1057! This is why they like to claim Wales was conquered in 1284, it wasn’t, the majority was only occupied until Glyndwr gave Wales back its Autonomy. Don’t trust Glyndwr? Trust the actions of the Tudors who would go on to annex Wales, if it had belonged to England prior to 1536-42, then there wouldn’t have been need to annex the place. Their actions prove No conquest had taken place! Their actions also prove they themselves,… Read more »

The influential United Nations “International Organisation for Standardisation” recognized and declared that Wales is a COUNTRY in December 2011. That should be good enough even for the Financial Times. Moreover, the United Kingdom of Great Britain & Northern Ireland is not a Country. Its very name proclaims it to be a KINGDOM.

Indeed, its actual name was United Kingdom(S) of Great Britain and Northern Ireland, but they dropped the S on account of what it implies….The multiple nations that inhabit Britain. The one thing they truly desire is that Britishness comes in the guise of Englishness, and that means The Nations of Scotland, but more importantly Wales can no longer be around.

Worked in Bristol a few years back. I was continuously told that I was “from the principality”. I explained that we are not one, but it fell on deaf ears. Also, regularly told that we are “a region of England”. Ignorance mixed with an Imperialist mindset, which will continue until we are an independent nation,.

But unlike you, many a Welsh person doesn’t seem bothered by such remarks. Which goes a long way as to explaining how successful their work has been in, “Domesticating” us to their liking.