Police in Westminster have seized amplifiers from “Stop Brexit Man” Steve Bray after they said he was protesting too loudly.

On Tuesday afternoon, a group of officers swooped on Mr Bray, who appeared to try and stop them taking his amplification equipment.

Mr Bray was told that under the Police Crime Sentencing and Courts Act, which came into force earlier in the day, he was forbidden from holding a noisy protest within a designated area outside the Houses of Parliament.

The top hat-wearing demonstrator from Port Talbot is often seen in the area playing loud music in a protest sometimes coinciding with Prime Minister’s Questions.

Mr Bray was known as the Stop Brexit Man because he used a megaphone to shout “Stop Brexit”.

In social media footage, Mr Bray, who was surrounded by banners and European Union flags, could be seen struggling with officers and telling them “hands off” as they attempted to take the amplifiers.

Police have just seized our amplifiers x 2. And microphone. I still have megaphone. We are going to need more amplifiers and people. pic.twitter.com/6myZ3d6cMq

An officer could be heard responding: “You’ve already been warned not to turn it on.”

Mr Bray then demanded officers return a banner he said had been taken from him, before accusing them of breaking one of the amplifiers.

His hat could be seen falling off in the scuffle.

An increasingly irate Mr Bray could be later heard shouting at officers: “You fascists! This is not law! Fascist mouthpiece.”

In another video on his Twitter account, a police officer was heard telling Mr Bray he will be summoned to court over getting his amplifiers back.

Other officers could be heard warning Mr Bray he could be arrested if he continues using the speakers to play music in the area.

The laws came as part of the Police, Crime, Sentencing and Courts Act, which included measures to curtail noisy protests.

Officers said the equipment was being seized under section 145 of The Police Reform and Social Responsibility Act 2011, which on Tuesday was extended to a wider area around the Houses of Parliament.

He told the House of Commons: “I know many of us have had brushes with Mr Bray but his voice is being silenced today – by tomorrow there could be many others who have never demonstrated previously who are subject to prosecution under this law.”

And so begins the Conservative police state. They are using recent legislation passed to prohibit peaceful protesting by silencing Anti-Brexit campaigner Peter Bray’s voice. What next? The removal of a protester not wearing sufficient cold weather clothing Anything’s possible with this Tory idocracy.

The Tories are determined to cling on to power. Johnson has used his libertarian image as a smokescreen to hide the hard right reality. He has shut out journalists who are not seen as sufficiently pro-government, wants to stop the judiciary from holding him to account, and now is curtailing protests which don’t have his support. His cabinet is filled with hardline Brexiteers. Let’s not forget that Rees-Mogg, Minister for Brexit Opportunities (should there be any), actually threatened companies that spoke out against Brexit with punitive action. No government contracts, no government access. That’s the sort of government which has… Read more »

Three downvotes for my comment and praise for this pathetic man who is paid to “protest” all day. Any of you actually seen him in person? He’s a nutter, shouldn’t be allowed to stand in Parliament Square all day. Probably could do with professional help.

He is a national treasure of Cumru, protesting against the greed of brexit. Even funny with song choices, while polite to everyone except the lying politicians. Tice is one if the biggest scums to live after Farage and Johnson.

Think you’ll find its 7 downvotes now 😊 PS. he’s not the one who is ‘pathetic’ 😉

Oswald Moseley would be so proud. All we need now is the Met to patrol in brown shirts and we are all but there.

Why does Drakeford think we’re better off in this State? Chasing unicorns about Labour UK Governments that occasionally bookend long periods of far right Tory abomination of governments. I sincerely hope his membership change his branches’ tack.

we in Wales voted for brexit so Steve please be quiet!

The only man in Port Talbot to wear a Top Hat….or regularly be seen with a Butchers Apron. 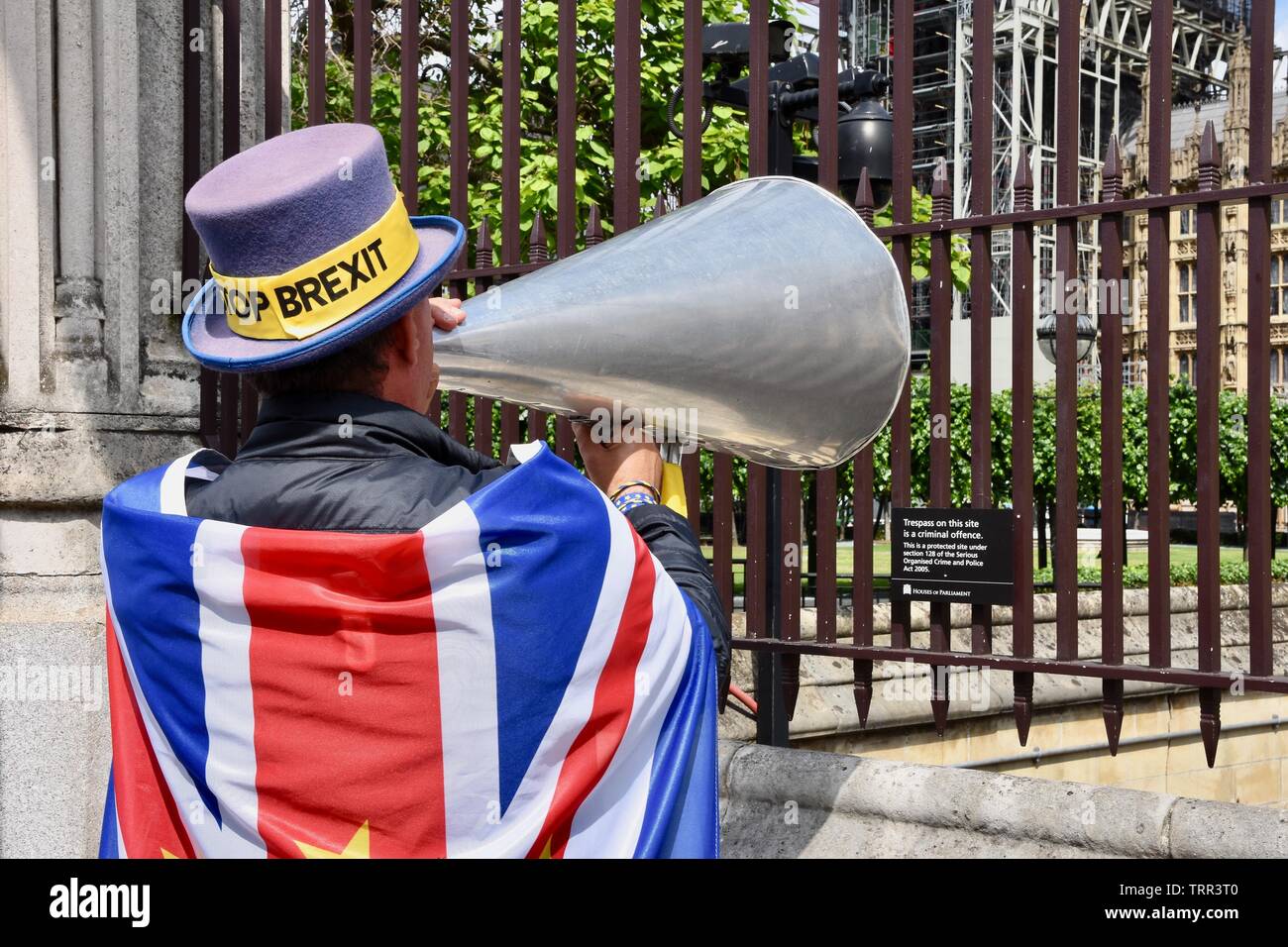 Port Talbot voted for Brexit. He is not only protesting about Brexit but any cause that he doesn’t agree with. There is a democratic right to protest. In his case, his intent is to cause as much disruption as possible by playing loud music up to 12 hours plus day and night disrupting Radio and Television listeners’ ability to hear various politicians being interviewed.Anyone else would require a licence to play music in public but he obviously thinks that he is a special case. Some might well agree that he is a …case!!!