A Welsh brewery has sparked a storm of criticism after producing a Platinum Jubilee Ale.

Felinfoel Brewery was inundated with complaints online after manufacturing the limited edition ale which marks the Queen’s Jubilee.

However, Wales oldest family brewery and the oldest canners of beer in the world, faced a backlash from hundreds of people who criticised the move, taking exception at the Welsh company’s support of the Royal Family.

In a post on Twitter which has prompted the backlash the brewer posted a picture of the Jubilee Ale with the words: ‘Here it is, our crowning glory! Get your hands on the limited edition Platinum Jubilee Ale. Available for purchase now, while stocks last.’

👑 Here it is, our crowning glory! Get your hands on the limited edition Platinum Jubilee Ale.

One user posted that it was Felinfoel’s ‘Ratner moment’ a reference to the time when Gerald Ratner, former chairman of jewellery chain Ratners, described one of its products as “total crap”. Others called for a boycott of the brewer, while one Twitter user user suggested ‘I guess stocks may last a while judging by the replies.’

(Many of those replies can be seen below) 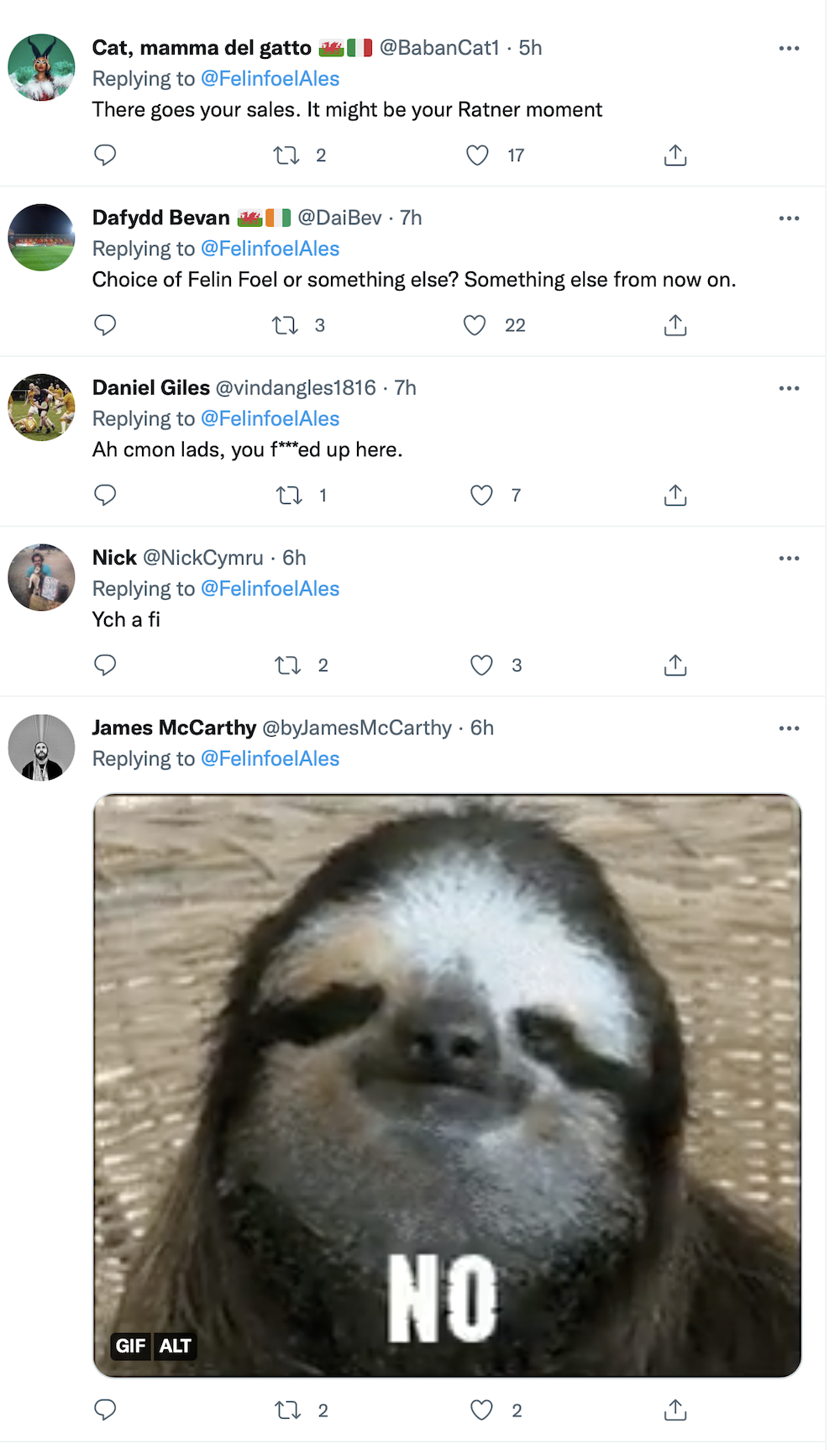 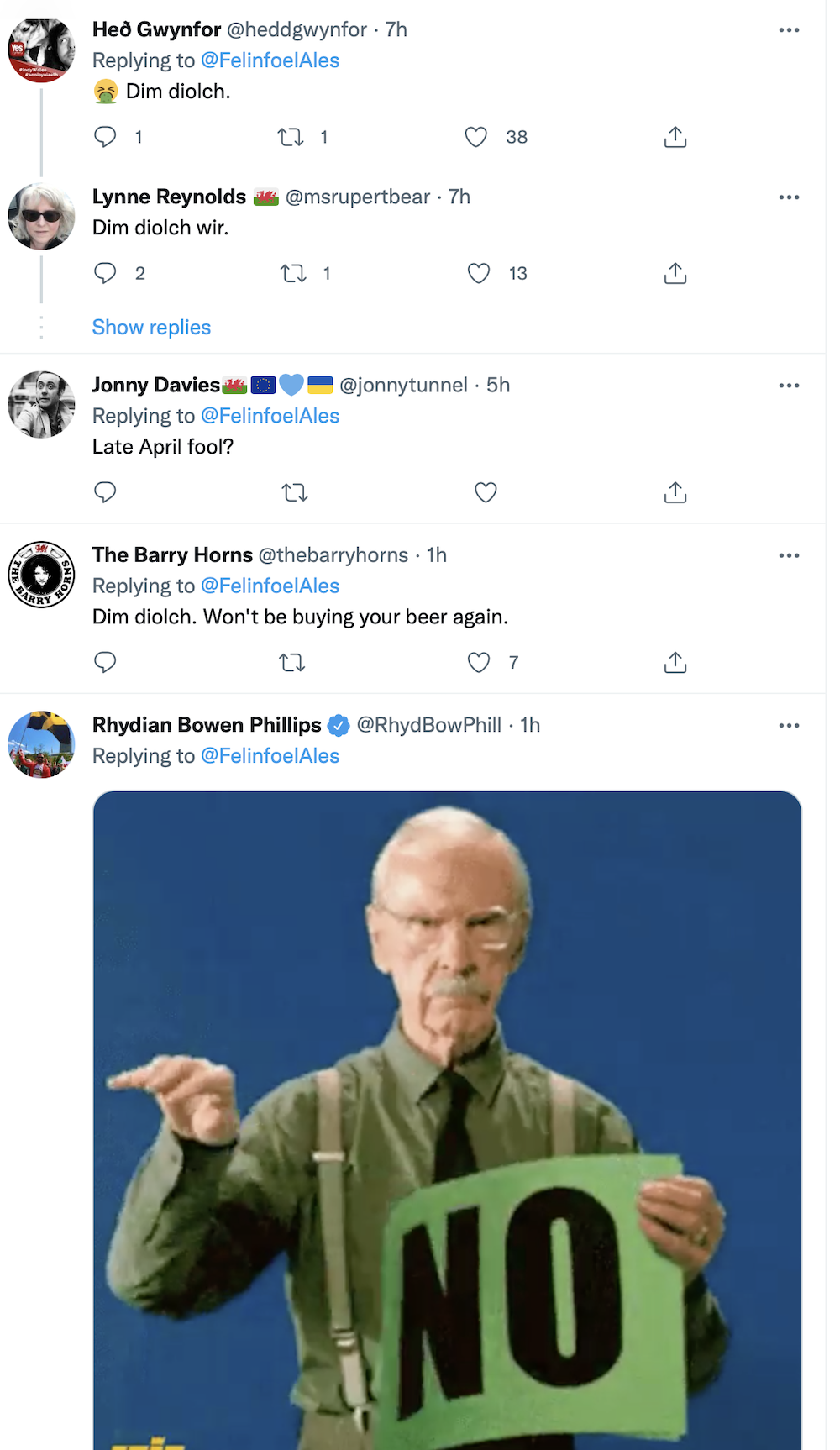 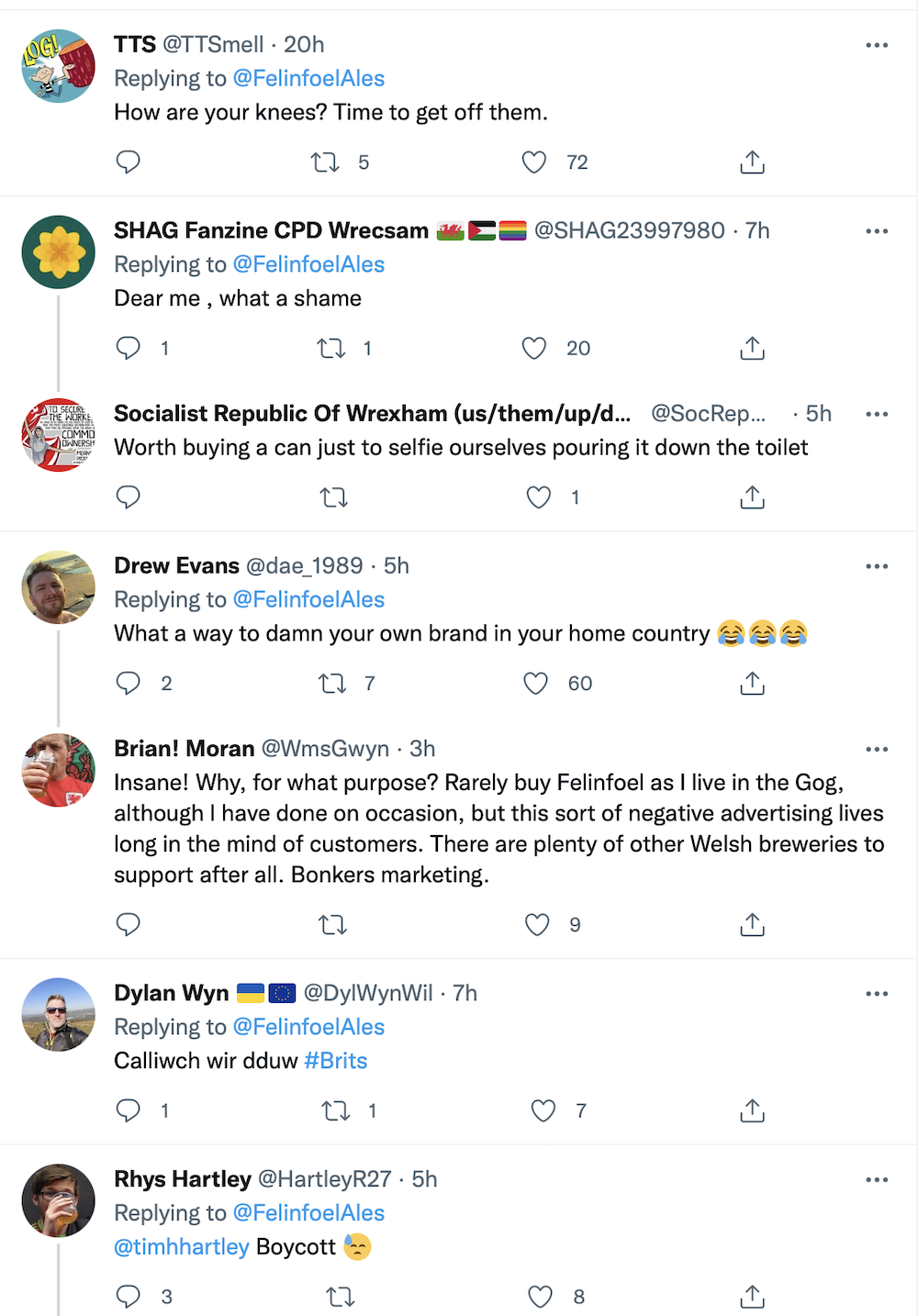 The company has longstanding links with the Royals having produced an ale to mark Prince Charles investiture as Prince of Wales at Caernarfon Castle in 1969.

On its website in a section detailing the history of the brewery, it writes: ‘More recently we were delighted to welcome HRH Prince Charles to the brewery during his tour of Wales in July 2012.

‘He took a keen interest in the tour of the brewery and was shown the entire brewing process. We were able to show him the commemorative ale we brewed for his investiture’.

The brewery founded in 1878 is based in the village of Felinfoel, near Llanelli and owned by the Lewis family. 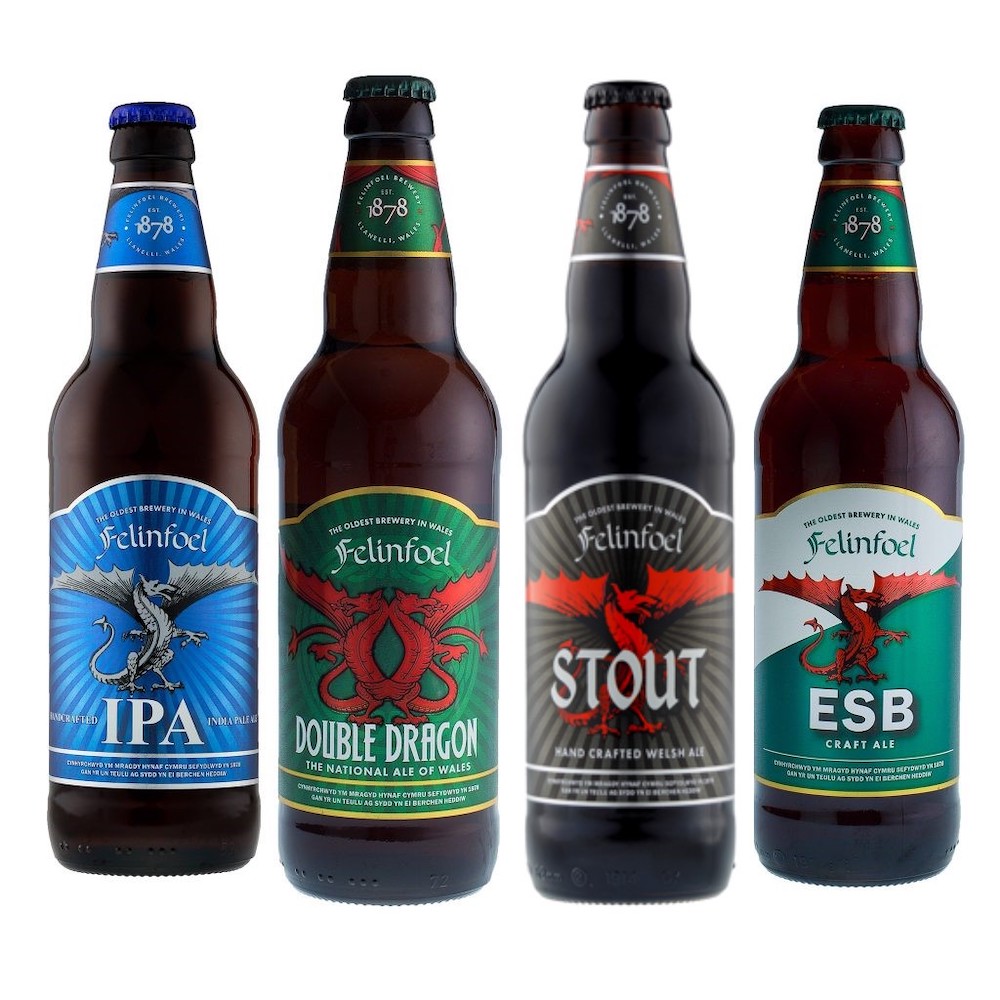 It produces such popular beers as Double Dragon – described as ‘the national ale of Wales’, Celtic Gold and Dragon’s Heart, which all trade on the company’s Welsh heritage.

Its limited edition Platinum Jubilee Ale is described as a ‘premium Welsh ale with a fruity flavour, a drink to be enjoyed’.

Now if Brains breweries social media team were on the ball, they could benefit from this

Brains ? It’s all part of the Marston’s empire now so they are probably dreaming up something similar. Best go to a smaller niche brewer.

Not another penny from me will be handed over to these sad sycophants.

U notice how anyone who disagrees with the messages (which are often negative rather than positive) is deleted from this platform. That’s also why plaid doesn’t make inroads. Negative messages

No I’ve not noticed that. They’ll delete sweary ones for sure or ones which are aggressive or confrontational. If yours are being removed, I’d check for that. The sweary ones go automatically so it’s most likely to be that.

As Welsh people we must stop this blind deference towards the English Monarchy? I find it embarrassing to witness how some sycophants follow sheep-like others. Do they want to stand tall or prefer to crawl, is the question I ask? The idea of doffing ones cap while referring to them as “Your Royal Highness ” or “Your Majesty” makes my skin crawl. This is a woman & family that’s never lifted a finger in their entire for themselves without an army of advisors, publicists and servants either putting them in a good light, advising to front a charity or wiping… Read more »

Plenty of “benefit scroungers” who’ve “never lifted a finger” here in Wales too. Are you one?.

The only presence those particular benefit scroungers have in Wales is Llwynywermod, Charlie’s holiday home.

How embarrassing, time for an independent Republic of Cymru

Wales does not have an economy to do so and with the current approach from Plaid and Welsh Labour never will have .

A great brew im sure to celebrate her fine service and to recognise the end of an of an era and the start of a new one that suites our nations 🏴󠁧󠁢󠁷󠁬󠁳󠁿emerging confident, inclusive pathway towards self determination.

What’s the harm? And what’s the big deal? People get silly dramatic on Twitter. If you’re not a royalist, don’t drink it. No need for a riot.

Agreed I’m for an independent Wales I’m not buying it personally but if the sales help a small Welsh brewery survive then so be it. I will also be enjoying the jubilee holidays with an opportunity to spend time with family not celebrating the royals as such just like an extra Christmas but without the nonsense

People have every right to feel betrayed. Brands have values these days. If they express a sentiment, people are likely to have views on it. It’s fallout from the post-truth age. When we don’t have facts and we can’t trust the information sources, we pick sides with those who align with us. It’s an unintended consequence, but a consequence nonetheless. I don’t drink. It makes no odds to me in this instance. But I will make purchasing decisions based on the stated values or political alignments of a company or it’s owner. And I make no apologies for it. And… Read more »

Im sure Felinfoel Brewery will be very happy with all of the negative publicity from the Nats who have nothing better to do in their lives. As they say there is no such thing as bad publicity- after all this has brought a previously unknown brand to the front pages of NC. Carry on lads

Rhosddu
Reply to  NOT Grayham Jones

Doubt it. Anyway, Felinfoel is anything but “previously unknown”, but I accept that you wouldn’t know that.

Get a life you anti English saddest

Have another read of the article and see if you can find anything anti-English there. It’s about a Welsh brewery plugging a pro-royal family line for commercial reasons, and the reaction to their sycophancy from across the country.

What childish pathetic lives you lot must lead .

Sad to see both of my posts deleted. N.C. doesn’t like anything that goes against the idea of Premier Wales and nothing else matters.

Ok then Mr Know it all please tell me where a Racist comment has been made?

Well done Felinfoel. I am proud to be British and will be raising a glass of your excellent ale to Her Majesty, at the street party in my (Welsh) town to celebrate the platinum jubilee. Hopefully the small minded racists who posted negative comments will stay at home and nurse their imaginary grievances, as I have no desire to drink or socialise with people like that!

There is nothing “racist” in the comments quoted in the article, unless the Royal Family are now their own race. The opinion in those comments is quite evdently that such forelock-tugging no longer sits comfortably with a wide cross-section of the Welsh public. Read the article again.

A handful of Welsh nationalists get offended by a company celebrating the Royal family. Why is this even news lol

What a pity Cymru didn’t follow Ireland’s example.They had the good sense to see this rubbish off their backs a Century ago.