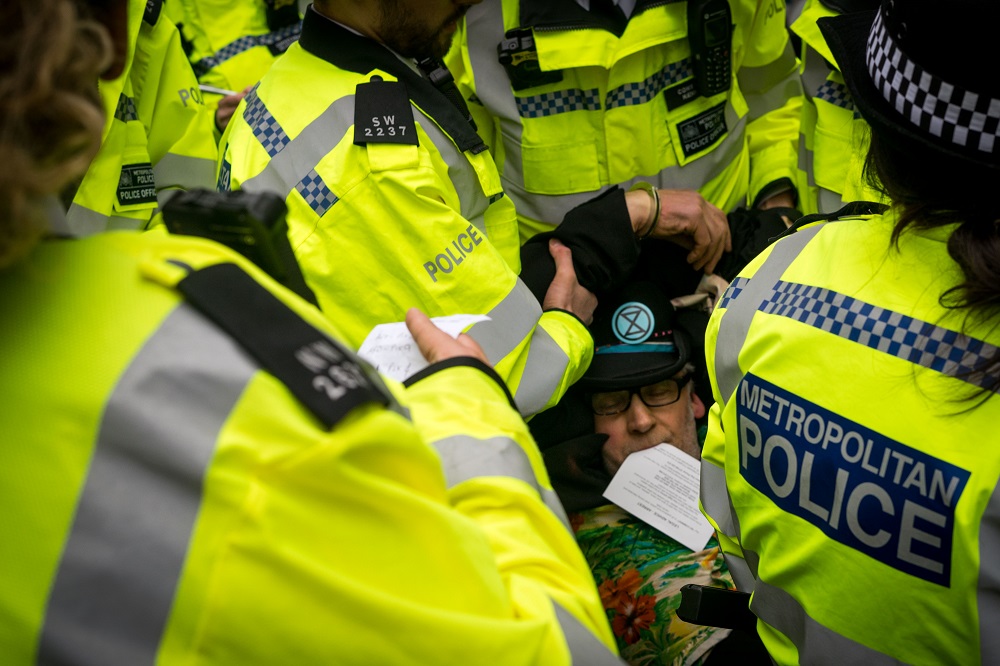 The Extinction Rebellion protest in London. Picture by Joshua Lowe

While climate activists from all over Wales have joined those blocking roads and disrupting transport in London this Easter, members of the Cardiff branch of Extinction Rebellion have been staging a similar protest in Wales’s capital.

This was done as part of Extinction Rebellions wider “International Rebellion” campaign, hoping to build on the attention garnered in the United Kingdom’s capital.

One member of the Welsh branch of Extinction Rebellion, Richard Noble, told Nation.Cymru that the civil disobedience was warranted.

“The climate scientists all agree that if we don’t change radically now the entire human civilisation will collapse within the century and I’m here to make what difference I can,” he said.

The campaign group has three demands:

Extinction Rebellion Wales, which involves affiliate groups from every major city in Wales, were also involved in the protest in London, where they oversaw the blocking traffic at Oxford Circus in London.

With help from the Bristol affiliate group, they installed a large pink boat on to a busy intersection in the heart of the city.

They used it as a stage to play music and hold talks, and attached themselves to it in order to keep the roads blocked for as long as possible.

A protestor who identified himself as Huw said: “I believe that the sand is leaving the hourglass and it’s now or never”.

“Many years of demonstrations and petitions have led to virtually nothing so non-violent civil disobedience is the next logical step,” he said.

Both Richard and Huw had attached themselves under the boat, with a PVC pipe linking their arms, making it difficult for the police to safely remove them.

The boat named Berta Cáceres after a murdered Honduran environmentalist, was taken away by police on Friday last week after they dislodged the many Welsh protesters from underneath it.

Nia, another one of the protesters from Cardiff, said: “I work in a bar and I can get time off work quite easily, I figured I’m exactly the kind of person that can go and help and this is where the main action is, so this is where I wanted to be.”

The civil disobedience actions in London have resulted in approximately 1000 arrests, with the group looking to continue into this week.

The events in Cardiff will not be the first civil disobedience action that has been held in Wales’s capital.

In March, the group organised the ‘Carnival of Animals’ Protest. This saw hundreds of protesters take to the streets wearing animal-inspired costumes.

During this protest, the group blocked Saint Marys Street and Castle Street, while also performing a sit-in at a Barclays Bank branch resulting in several arrests.

We can’t run Nation.Cymru without your help! If you support the development of an independent Welsh media for the people of Wales, please donate now!