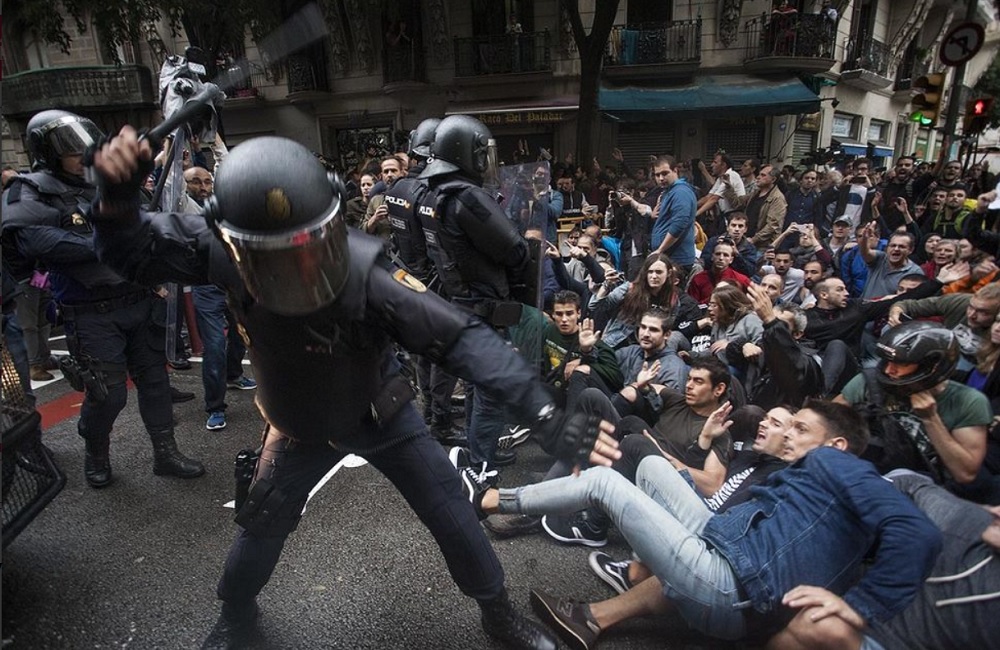 The Welsh Government have been criticised after a spokesperson told a BBC reporter that they were sad to see “violence on any side” in Catalonia.

Elliw Gwawr said that she had asked the Welsh Government whether they would be willing to condemn the violence against voters, but they would not.

They later contacted her to say that the original comments did not reflect the government’s view.

Many on social media compared the comments to Trump’s claims that the Charlottesville attacks by white supremacists on protestors had involved “violence on many sides”.

Ed Gareth Poole, a Lecturer in Political Science at the Wales Governance Centre, said that it was “a disgraceful statement”.

Assembly Member Simon Thomas said the response was “pathetic. Remember this the next time Labour cherish the spirit of the international brigades”.

The Catalan Government said that 465 people had been hurt due to the violence.

The vote was held in defiance of the Spanish Government who have said that the referendum is illegal and have ordered the police to stop it.

Franco, will be smiling from his grave as Catalan autonmy seems to die (hopefully not).
This quote in his, Franco’s own words would please, Brussels and the E.U technocrats :
“We do not believe in government through the voting booth. The Spanish national will was never freely expressed through the ballot box. Spain has no foolish dreams…”

Before,we always had the luxury of saying it wasn’t our govt.(pre SENEDD days) now I feel nothing but shame and contempt for this labour govt. sitting on Welsh soil

Members of my family fought and died alongside the Catalans against Franco. Still have the letters from Spain. They were labour but would be ashamed of this labour government for not giving any support.

I see Chris Bryant has supported the Spanish State….. no great surprise there.

Totally consistent with his yellow perverted view of life. Wears a Labour “label” but no more socialist than any other posturing supremacist. Loves the big centralised corporate state which safeguards his position, status, income etc

Mae ymateb llywodraeth Cymru yn warth arnom fel cenedl war.
The response of the Welsh government is a shame on us as a civilised nation.
I shall never again set foot in Spain, but I shall go to Catalunya.

I don’t think they believe they are siding with Spain or Catalonia, they don’t see that they have the mandate to take a view, they are being good little colonials, it shows the disrespect they have for not only the democratic right of the Catalans but for democratic development in Wales. Wales powers are going to be taken from them bit by bit by Westminster the best Ca-win can muster is a strongly worded letter. We can’t expect any more from this pathetic excuse for a government.

apalled that Welsh Labour say nothing as democracy is batoned to the ground, women dragged by their hair, old people thrown downstairs, watch the film footage. Plaid Ifanc defended a Catalan school voting station, it stayed open. They were horrified by what was done, a mass attack on civilian society – for voting. Nothing more. Any law against voting is illegal. They were more horrified by the silence of the democratic world. A silence that roars.

Academics and activists to one side. So many normal people here in Wales love Barcelona and I seriously doubt whether the understanding of Catalonia is that well understood.

I think in this instance a positive stance supporting the people of Barcelona (the bit we all know and love) would have been really well received.

When doing the Cardiff Half Marathon today, I saw loads of Catalan flags..the people have made their choice – and Labour like usual are out of step

And when you side with the devil only evil can come of it. Labour are the bully in the south, the Tory the bully in the north, don’t bother with fence sitters they have no moral perspective. Anyhow, they are foriegn political party representatives in an already oppressed country and those in charge are laughing at everyone not in the same league. We have seen Thomas, Kinnock and others (of other parties, even Welsh parties) lead the way and Jones is no exception. They are mentally locked within the honourarium system in the hope of a pat on the head… Read more »

I just pray the blood dosn’t flow and a huge body count rise…though I believe it will. Meanwhile, the E.U – the bastion of European democracy – are sure to look the other way. Their dream being the eventual, one world globalist, rule by an unelected technocrat elite.
I’ll put my money on, Catalonia to finally win the day. But, sadly after much suffering and an envitable death count…

Like it or not, Carwyn Jones and friends are walking a very tight rope in trying to defend Welsh interests during Brexit. Siding with the SNP was a huge step for Welsh Labour, and not something they did brashly. It was deeply thought out and considered. Siding with Catalonia openly is a gamble for Welsh Labour whilst they mus lt consider longterm effects of Brexit withdrawal bill and legacy of their cooperation or lack of with Westminster. A gamble they must consider over at length before taking. They are the party in power, and of they were not moving with… Read more »

The pictures, especially those of firemen confronting the police, reminded me of the miners’ strike in the UK in 1980’s

1st October 2017 was a dark day for democracy, EU and Catalan flags should be flown at half-mast outside government buildings

“Today we have witnessed a nationalistic propaganda act, undemocratic; a coup attempt against Spanish democracy, and so a coup against Europe.”

Shame on Spanish govrnment. If you are horrified by the events in Catalonia, please sign this: