A Welsh language board game surged to the top of Amazon’s bestseller list this week.

Hyderus? is a bilingual family quiz about Wales that has sold over 3,000 copies in the run-up to Christmas and will no doubt be finding its way into many a festive stocking.

Confident? which was created by couple Ceri Price from Llanelli and Natalie Podd from London already sold in five languages and six editions across the world, but they launched the Welsh edition in September.

Ceri Price said that the board game had hit the top spot on Amazon on Tuesday after selling 120 copies in one day.

He said however that he expected next week to be the busiest of all as people searched for last-minute Christmas gifts for members of the family.

“New board games usually print about 2,000 copies, something like that, and they don’t usually sell out. So to do this for the Welsh version in its first year, it’s pretty amazing,” he told Golwg360.

“We’ve had a lot of support, people really enjoy it, and there aren’t many things like this available in Welsh, so it shows that there is a demand for such things in the Welsh language.

“We sell too, not just to Welsh speakers, but to non-Welsh speakers because it’s bilingual. We really had no idea how it was going to go because there was nothing to compare it to.”

He said that despite not knowing it would be a financial hit, it was worth the gamble just to ensure there were board games available in Welsh.

“There hasn’t been anything like this since Gêm yr Eisteddfod (the Eisteddfod Board Game) which is quite old, so it was hard to estimate how we would do,” he said.

He had previously said that they had put a Welsh version of the game on their website for people to download to gauge if there would be any interest.

“The message was clear – people were crying out for more games they could play in Welsh, and Welsh learners wanted a bilingual game to practice the language,” he said.

“That gave us the confidence to go ahead with it. We decided to make it bilingual with brand new questions – half about Wales, half about the world – so that everyone in Wales and beyond could enjoy it.”

As there is a translation for the English speakers it be used as preparation for our citizen test after independence.

Sounds brilliant, one is on its way here for a Christmas gift, I wish all involved the very best with it! Diolch a phob lwc.

Mae hyn yn wych! I will also be ordering for christmas. Thank you for including our Language, it will no doubt be a well used game for my bilingual children and for me and my family/friends who are currently enrolled on Welsh language courses. Diolch yn fawr iawn a Nadolig llawen i chi i gyd. 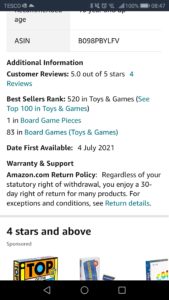