The announcement that a Team GB men’s and women’s side will be competing in the HSBC World Rugby 7s series for the first time has provoked anger amongst Welsh rugby fans.

The HSBC Canada Sevens to be played in Vancouver and Edmonton next month will include a Team GB side in the 12 team men’s tournament that will include Canada, USA, South Africa, France, Ireland, Kenya, Spain, Japan, Chile, Germany and another team to be announced.

In addition, there will be a four-team women’s tournament featuring Canada, USA, Great Britain and France

It will be the first time that a men’s or women’s Great Britain team has competed outside of the Olympics in rugby sevens.

Announcing details of the tournament on their Canada Sevens website, a statement read: “Following their bronze medal game appearance in Tokyo, England, Scotland and Wales will continue to compete as Team GB. These will be their first appearances in the HSBC World Rugby Sevens Series.”

However, the announcement has caused anger among some Welsh rugby supporters who have concerns over the future of the Wales national side.

Following the announcement of the Canada Sevens tournament a petition was last night launched urging that Wales, Scotland and England be kept as separate teams within the HSBC 7s tour. 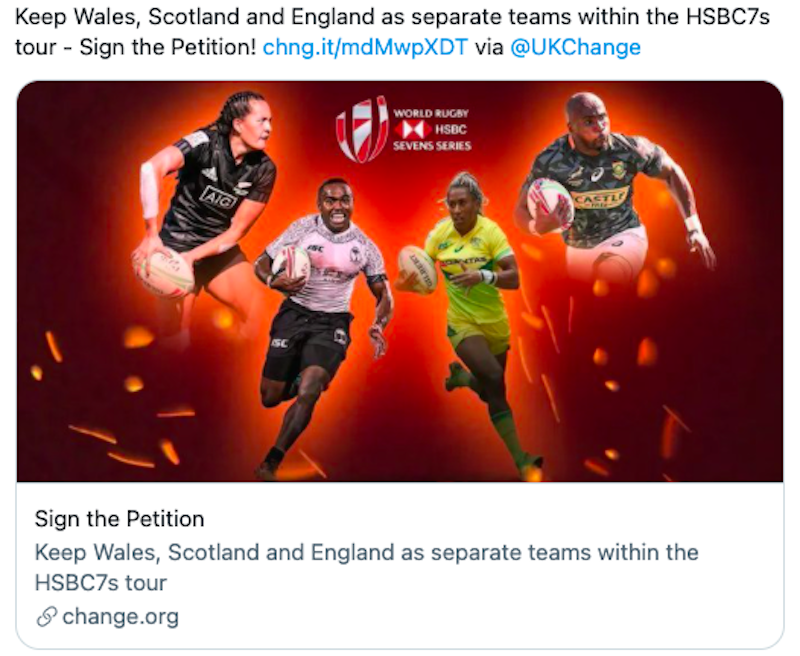 The petition, set up by a user named RA.D on the Change.org website read: “Wales, Scotland and England are separate entities in sport outside of the Olympics and B&I Lions.

“Each country has a long history and tradition within rugby union and to dispense of these traditions is an insult to the fans and players.

“There is a great rivalry between the teams and the fans that makes for a great spectacle during a tournament. Losing the individual teams will lose that spectacle and lose supporters to the game.

“It is likely that many fans would not support a combined Team GB on the 7s tour as the likelihood of all three nations being equally represented is very small.

“I’m calling on the fans from all three countries to come together to keep our individual teams so the banter can continue going forward.

“The rugby family does not need to be getting smaller by the loss of these individual teams on the tour.”

The Rugby Football Union (RFU), Scottish Rugby Union (SRU) and Welsh Rugby Union (WRU) last year confirmed that they had obtained funding to field GB Sevens teams for the 2021 season leading up to and beyond the Olympics.

The deal was made possible because of a commercial partnership with The National Lottery promotional fund.

The HSBC Canada Sevens are two-day rugby sevens tournaments. In 2021, the Canada Sevens will be the first and second stops in a six-stop world tour as part of the HSBC World Rugby Sevens Series.

The first event will be hosted at BC Place in Vancouver, BC on September 18-19 with the second following on September 25-26 at Commonwealth Stadium in Edmonton.

Due to the ongoing impact of the Covid-19 pandemic on travel restrictions worldwide, some men’s national teams were unable to accept their invitations to compete in Canada.

The tournament stadiums will also operate at fifty percent capacity due to the pandemic.

The news of Team GB competing in the world rugby 7s tournament comes as reports circulate that a Women’s British and Irish Lions rugby team is close to being launched.

According to a story in today’s Daily Telegraph, British & Irish Lions officials insist it is just a matter of time before a female team is launched with a feasibility study set to deliver its results by the end of the year.

England have been pushing this idea for some time now. In 2020 the RFU made 140 people redundant and announced a loss of £107 million, and said it was cutting funding to both male and female 7s teams. At the same time they were pushing for GB teams to enter men’s and women’s tournaments, this was resisted by the other nations, but it seems to have been pushed through now.

I get the feeling there is a lot of this quietly going on behind the scenes – erasing the identity of Wales, Scotland and N Ireland through forced amalgamation into the Union. It’s all about control, keeping it. Well it’s too late – the Celtic countries of the UK are going their own way, breaking free and nothing will stop it now.

….. Probably because the world equates “GB” with England.

The player making the remark was a former England international player, Would she not know there is a difference. And the broadcast was on the BBC aimed at a British audience.

Dim problem – we know you’re worried when an astro turfer like you tries to masquerade as a Welsh person on here – we are not stupid or fooled by your ‘handle name’ – All these tactics trying to erase our identity will only make us stronger to resist against it. Let Wales be Wales and go away if you don’t like it. All are welcome but respect Wales and its culture, language and heritage.

and not just in sport.

I see Boris and Gove’s dirty hands in this. Muscular unionism again.

The WRU are a British unionist organisation.

They wear the feathery badge of capitulation. It was only ever a matter of time

So that’s Rugby 7s off the watch list then.
typical of the WRU bearers of the cowards feathers badge to roll over without complaint

Then it will be pushed onto the 7’s mens team, then they will suggest the rugby union sides and then they will come for the football and everything else to wipe out our existence. Then I look at the type of bootlicking the WRFU do when they turn the Six Nations into a militaristic Britnat propaganda fest while using the emblem of the fake prince of Wales and then I can easily see them wanting to wipe themselves out for the good of their English overlords. Pathetic.

With the best will in the world the petitioner knows not of what they speak. Wales are so poor at women’s 7s (thank you WRU) that they will be in the second tier of European 7s next year – alongside Denmark Israel and Czechia. The chances of Wales competing in the women’s World Series any time before the 2024 Olympics are nil. And that is being optimistic.

Scotland do have a slightly better chance, but not much.

And the idea that there is any meaningful rivalry between the three home nations at 7s is laughable.

What do you expect after all this British Lions hoo-ha. Once you start a British activity you can expect more of this. It’s time some of our players started refusing – but like being offered the MBE, too many people sell their Welshness for sucking up to queenie and her upsuckers.

The players have to earn a living, this may be the only viable option for the best of them going forward. Anyone who followed the Olympic coverage will know that 12 months ago none of the players had a contract.

Time to start burning the Butcher’s Apron and the Coward’s Feathers. What really p!sses me off about the Usurper Prince’s feathers is that the words ‘Ich Dien’ aren’t even Welsh – they’re German. The fact that the WRU are happy to use this colonial symbol for the Welsh team says everything you need to know. If those sycophants in the WRU are going to sell out the Welsh team then perhaps it’s time for us to abandon Rugby Union altogether and support Rugby League instead. Rugby League is the dominant version of the game in the North of England and… Read more »