A woman complained about a £85 fine in Rhyl after thinking that a Welsh language sign was telling her that parking was free.

The sign said ‘Aros am ddim mwy nac 11/2 awr’ (stay for no longer that 11/2 hours) but the woman said the first part of the message taken alone ‘Aros am ddim’ implied that parking was free.

She said that there were also English language signs at Home Bargains in Rhyl but that she didn’t check them.

The Nottingham Post carried the story under the headline “Woman hit with £85 parking fine because sign was in Welsh” but the Welsh language used is correct, although ‘Dim parcio am fwy nag 1 awr’ might have avoided the customer misunderstanding.

The women had posted on Facebook: “I believe the sign is misleading and should be changed, especially if more people have made the same mistake as myself.

“I double-checked the signage, there is only one sign at the entrance in Welsh. There are other signs in English by the entrance to the actual shop, I had no reason to check for further signage, as I believed I was OK to park.”

A spokesperson for Parkingeye who monitor the car park said that there was “highly-visible signage in both the English and Welsh languages”.

“If anyone has mitigating circumstances, we would encourage them to highlight this by appealing,” they added.

Surely someone who doesn’t read Cymraeg would look at the English signs? But yes, the wording of the Cymraeg is a bit sloppy.

Take your point but, as someone learning Cymraeg since moving here, I try to read signs in Cymraeg only. A problem I have is the number of different ways official signs say the same thing, even in the same area, so not just a Gog/De variation. Getting used to it though!

Sometimes, when you don’t know which language is telling the truth, your safety depends on you understanding both: 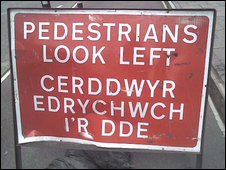 No disrespect, hannergylch but why is your name formed in such a way there is a (soft) mutation to ‘cylch’?

In all the dictionaries I know and use, the form is ‘hanner cylch’.

I guess you want to stand out from the crowd! 🙂

It’s the result of accidentally tapping the wrong auto-complete hint on a smartphone keyboard, halfway through typing the compound word “hanergylch”.

The autocomplete algorithm is useful on a tiny keyboard. It prioritises frequently-used words, but sometimes that can catch out the unwary!

THANK YOU! Such a sign was near my house and convinced me I was stupid.

I’ve noticed that too, all over England the same thing is written in slightly different forms.

As Welsh is not my first language, I can’t say if the sign is sloppy or not. When I first read the sign I understood “Stay for no more than 1 hour and 1/2”.
Implying that is free after 1 hour and 30 minutes is against any common sense if anyone has ever sat behind a steering wheel!
Saying this, I have also seen: “Di dal” which was translated as “free” / without pay. I don’t know how accurate this is. Nevertheless I am more encouraged than ever before to keep learning this beautiful language!

Da iawn chi am barhau i ddysgu’r hen iaith! Dyfal donc a phopeth felly … 🙂 There is nothing wrong with the translation offered – it’s more a case of the sign designer unaware of how Cymraeg ‘breaks up’ the different parts of the phrase in order to convey meaning. Very few of us translators ever get to see the final version of our work before it enters the public domain. Even when colleagues proofread for us (and assuming they are infallible, too – which is unlikely as we’re not Popes … ), the final layout is often down to… Read more »

This problem is common in whatever language the signs are written in. I stopped once in Llandyfri and I was unable to make sense of a complicated bilingual sign in either language as it was macaroni and in addition it was almost impossible to enter the numbers of my licence plate an experience I have also had using the car park at the Walton Centre in Liverpool. The issue here is the greed and corruption of these private companies who set it up so that people fail and just pay the fee. A friend of mine went to visit a… Read more »

There is a English signage to the left , maybe call to Specsavers

The crux of this is that she only read half the sign, conveniently leaving out the part that explains the timings of the free parking. I wouldn’t pay anyway, it’s not a fine, it’s a charge for breach of contract, but opens up another can of worms. Seems she’s now admitted parking it there so she’s stuck with the charge.

How long did she park there for of was there in fact a fee the sign illuded to? At any rate yeah a sign with both Welsh and English. If anything to reduce the change for that excuse. If you have to hunt for a sign to get an explanation there is something wrong with your setup and it feels like a money trap. Did you not see the English sign over there in the bush left of the one on the right by that bridge. no not that one. It clearly states your money belongs to us now. I… Read more »

Yet we all know an excuse when we hear it?

Don’t feel bad about the Nottingham Post running off with the story. I used to live in Llanelli and am now in Nottingham, and half the stuff the Notts post seems to show has little to do with Nottingham, a bit odd for a local paper, but ok.

If you read both languages, there still isn’t much imperative to go and read both signs; that is a little weird. If you’ve read a sign and got the gist, you move on, and most people don’t go hunting for more signs to double-check what they read.

A “Free parking” sign would say something completely different, “Parcio am ddim”, perhaps? She only read the first line, anyway, but in fairness to her, the wording looks a little cumbersome.

It’s not a fine!! Private companies like Parking Eye, a dreadful company, CANNOT issue parkng fines. It is a parking charge which you don’t have to pay. They are a money making company who have no interest in managing car parks. If you receive a parking CHARGE letter from them, either rip it up and recycle it or write them a response charging them for wasting your time and admin costs 😂

Yes. The language isn’t the issue… It’s not a fine, everyone can safely ignore the charge. Only the police and local council can issue a fine.

As a ‘weak’ Welsh speaker I would have assumed it says free parking for 1 1/2 hours. And not checked for an English sign. People like me would like to make more use of Welsh in our lives, don’t set traps for us.

If the woman was Welsh she will have seen enough of the language around to know that ‘am ddim’ means free. With no English sign nearby and awkward layout of the Welsh wording, I am on her side and I hope she won’t have to pay the fine.

Because ‘FREE PARKING’ signs are all over the place, right. Right??!
#ahem.

Now we’re out of the EU we can end this Welsh language nonsense one and for all. It’s time for us to take back control and stop praying at the alter of diversity.