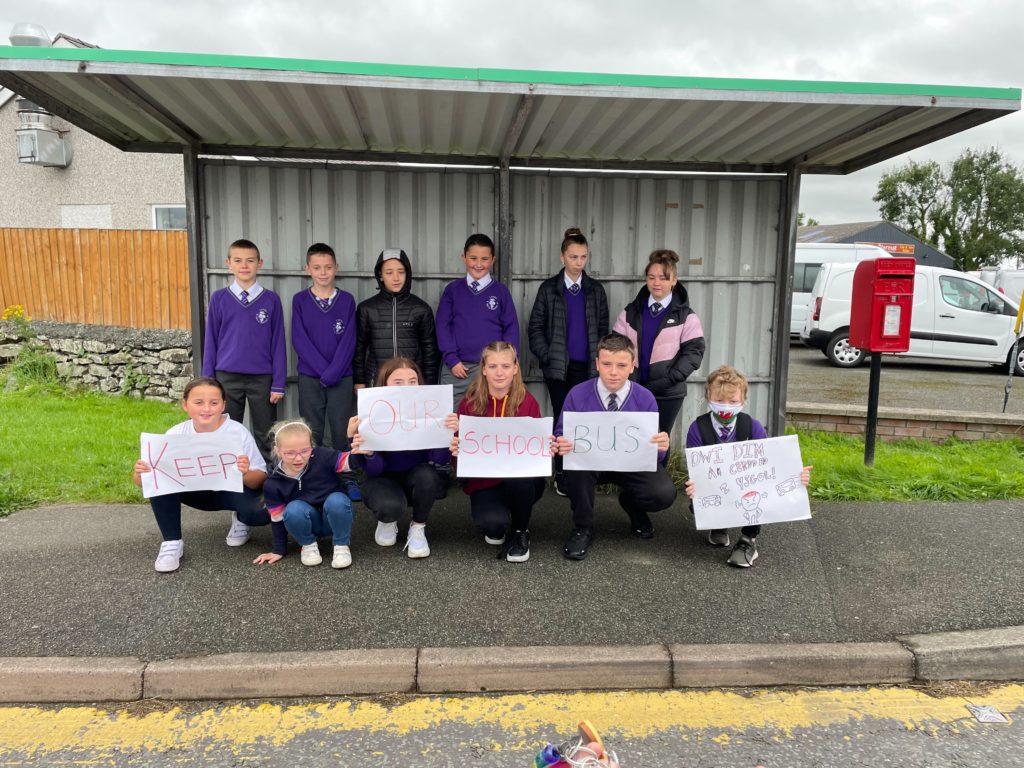 Parents in some communities fear that changes to school bus regulations could leave their children with no daily transport from September.

According to Anglesey Council, amendments to national legislation have led the authority to scrap the previous system of ‘selling’ empty bus seats to children choosing to attend alternative schools.

As a result of the new Wales-wide regulations, paid-for public buses must now be able to accommodate wheelchair users to satisfy PSV Accessibility Regulations (PSVAR).

But with many school buses not equipped to meet these guidelines, those not eligible for free transport are having to find alternative means.

The move has sparked concern in communities including the Gaerwen area, where many parents have traditionally paid for the daily transport to Ysgol David Hughes in Menai Bridge rather than Ysgol Gyfun Llangefni, which Ysgol Gynradd Esceifiog officially feeds into.

In place of the old system, the authority says that it is possible for parents to apply for a free bus pass, although warning that spaces are limited with no guarantee they will be successful.

But many residents say they have already been unsuccessful in their applications, leaving them having to explore the potential of hiring a private coach or to transport the children themselves if they are to continue attending the Menai Bridge secondary.

Ceri Wyn Owen, a mother of four who’s also written to the island’s Senedd Member, said there was a lack of consistency in regards to school catchment areas on the island, stressing a convention dating back decades of some children from both Gaerwen and Pentre Berw travelling to Ysgol David Hughes.

She also pointed out that children living in Dwyran were entitled to choose to attend either secondary school despite being closer to Llangefni, with children attending the Welsh-language Ysgol Morswyn in Holyhead also entitled to free transport to Ysgol Uwchradd Bodedern – due to it providing fully Welsh medium education – despite there being a secondary school in the town.

“The bus has been running for over 20 years,” she said.

“I used the bus myself as a child in 1996 and the arrangement was that we paid 60p a day direct to the bus company.”

She added that the change is thought to have affected dozens of children in both villages.

“This service was provided to children from Pentre Berw and Gaerwen because the bus travelled that way after finishing its last official stop at Plas Penmynydd.”

But claiming that children from other areas have been dropped off in Pentre Berw in order to attend Ysgol David Hughes – thus ‘drastically increasing’ numbers travelling on the bus and accentuating the problem – she called on the authority to recognise the historic precedent and include both Gaerwen and Pentre Berw as within both Llangefni and David Hughes’ catchment areas or to permit the previous arrangement to continue.

In response, an Isle of Anglesey County Council spokesperson said: “In the past, if there was room, the authority “sold” empty seats (bus passes) on specific school transport to those pupils not eligible for free transport under the current policy:

“To coincide with the new Public Service Vehicles Accessibility Regulations 2000 (PSVAR) that came into force on the 1 st of January 2020, we will no longer be selling these empty seats (bus passes) for the 2021-2022 academic year.

“However, it is possible for any pupil who isn’t eligible for free transport to apply for a bus pass if they wish. Empty seats are limited and applying does not guarantee that you will receive a bus pass.

“The bus from the Gaerwen area to Ysgol David Hughes will continue to run in exactly the same way as it has done over the past few years.”

These aren’t “amendments to national legislation” nor are they “new” regulations. This is UK legislation that has sat unchanged on the statute books for 21 years. The fact that Anglesey Council has failed to ensure that vehicles it has purchased or contracted over the past 21 years complies with the requisite legislation is their failure, and not due to any supposed national change in said legislation.