538 Cymru: What would Wales look like if it had the US Presidential voting system? And who would win? 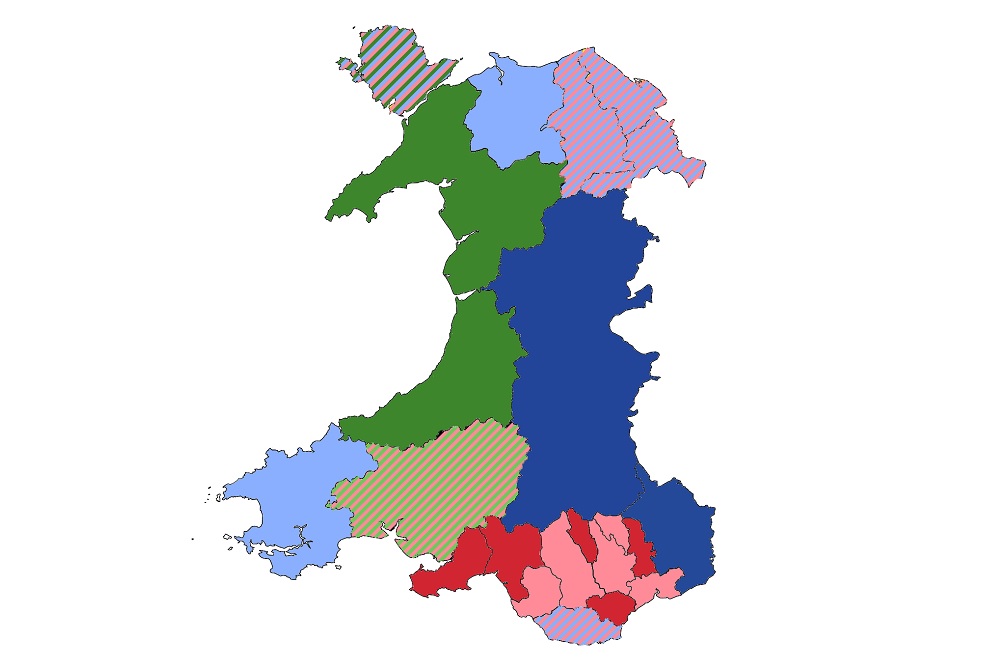 As we approach November many of us will be turning our attention across ‘the pond’ where Joe Biden and Donald Trump are doing battle for the US Presidency.

The idea of a directly elected leader in Wales has been mooted by a few people over the years – most recently by Brexit Party MS Mark Reckless.

Which would be the ‘swing states’? Which ‘states’ would be in the bag for the different parties? What would be Mark Drakeford, Adam Price, and Paul Davies’ path to Wales’ presidency?

And would anyone really have a chance of beating Labour, whichever electoral system was chosen?

So first of all, how does the electoral college work in the United States?

In total the US has 538 electors voted for by the 50 states. Every state in the USA gets two electors, plus a number of other electors based on the population of that state when the last census was carried out (in this case, a whole ten years ago in 2010). Each extra elector represents around 700,000 people, but if the population of the state falls below that threshold they get one anyway.

Some states have a very small population so the extra electors for each state in practice means that there’s a big discrepancy in voting power between the smaller, usually rural states, and the large urban ones.

Tiny Wyoming, for instance, has three electors despite being barely bigger than Cardiff, and three times the number of electors per head of the population as California.

These smaller, rural states tend to swing Republican. This explains how Donald Trump could win the election without winning the popular vote in 2016, and why he has the same in-built advantage again this time.

What if we applied this system to Wales? Wales doesn’t have states. The closest thing that we have are the 22 principal areas which the country is divided into for local government administration.

If we give Wales’ principal areas two free electors each that’s 44 of the 538 gone, leaving 494 left.

Wales’ population was estimated by the ONS in 2019 as 3,152,879. Divided by 494 is 6,382 people per elector. Adding the two free electors on top, as in the US, leaves the principal areas with the following numbers of electors:

As in the US, this gives the smaller principal areas something of an advantage – Merthyr Tydfil was over six times smaller than Cardiff, now it’s under five times as small!

But unlike in the US this doesn’t seem to favour one demographic over another – both the smallest and the largest areas are urban and some of the smallest and largest (Anglesey and Carmarthenshire) encompass many rural communities.

So who would win the Welsh Presidential Election?

Well, the answer would probably be ‘the Labour candidate’. Apart from two European elections, the Labour party has won every election in Wales going back 100 years, across Senedd and General Elections.

Unless you hold an election however it’s difficult to know how it would pan out. Would people vote as they do in local, Senedd, or General Elections or vote in a different way entirely?

My gut feeling is that since this is a vote to decide the head of government in Wales, it would be treated mostly like a Senedd election with the same kind of people voting for the same kind of reasons.

Cardiff: Solid Labour. They hold power here at Westminster, Senedd and a local level. Crucially too their main opposition is split between the other parties in different parts of the city – Tories in the leafy suburbs of the north of the city, Plaid Cymru in the west, Lib Dems where the students are in the middle, etc.

Swansea: Labour, for the same reasons as Cardiff, although the opposition does come mainly from one party (the Conservatives).

Rhondda Cynon Taf : Lean Labour. Plaid has some strength here, holding the Rhondda Senedd seat and at local government level, but the area is larger than the constituency and all other indicators point to Labour.

Carmarthenshire: Plaid-Labour swing seat. This would be a very interesting one as Plaid, Labour and the Conservatives hold parts of the electoral area, but Plaid hold Carmarthen East and Dinefwr at all levels, the council, and are competitive in Llanelli at the Senedd level.

Caerphilly: Lean Labour. Plaid are competitive in Caerphilly itself but the local government area is larger and includes parts of the valleys where they don’t get as much of a look in.

Flintshire: Labour-Conservative swing seat. As we’ve seen at a General Election and Senedd level at recent elections, both parties could win on their day in the north-east.

Newport: Lean Labour. Pretty solid for Labour across all levels of government, although the Conservatives would be semi-competitive.

Bridgend: Lean Labour. Essentially a combination of the constituencies of Bridgend and Ogmore. The Conservatives hold Bridgend at Westminster but aren’t particularly competitive there at the Senedd, but Labour are solid in Ogmore at both levels.

Neath Port Talbot: Solid Labour. Not a sausage of hope for any other party here, as far as I can see.

Wrexham: A real Labour-Conservative swing seat. This is a marginal constituency held by different parties at the Senedd and Westminster level.

Powys: Conservative. Only the Liberal Democrats are really at the races as the opposition here but given their limited appeal elsewhere in Wales, would people vote for them in a presidential-style election?

Vale of Glamorgan: Another real Labour-Conservative swing seat. This is a marginal constituency held by different parties at the Senedd and Westminster level.

Pembrokeshire: Lean Conservative. These seats are held by the Conservatives at all levels, but they are also perennial Labour target seats at almost every election.

Gwynedd: Plaid Cymru. They win every tier of government here (although currently don’t hold Dwyfor Meirionnydd at the Senedd due to Dafydd Elis-Thomas’ defection).

Conwy: Lean Conservative. Essentially a combination of Aberconwy and Clwyd West, which are held at the Senedd and Westminster by the Conservatives. Plaid Cymru provide the main opposition in both seats at Senedd elections, Labour at Westminster elections. Could be one to watch.

Denbighshire: Labour-Conservative swing seat. A combination of the Clwyd West and Vale of Clwyd constituencies. The Conservatives hold the former and Labour the latter. Plaid Cymru is in the mix in the former but not at all in the latter.

Ceredigion: Plaid Cymru. Like Powys the Liberal Democrats are competitive but would anyone vote for them given that they wouldn’t be competitive on an all-Wales level? Although the same might be said of Plaid Cymru, of course – if so, the Conservatives might have a look in.

Isle of Anglesey: The swing seat. A three-way fight between Plaid Cymru, Labour and the Conservatives. Plaid hold it with a big majority at the Senedd but it changed hands from Labour to the Conservatives at the General Election.

Blaenau Gwent: Lean Labour. A pretty solid Labour valley seat but has shown a readiness to vote for challengers, such as the Blaenau Gwent People’s Voice, Plaid Cymru and the Brexit Party in past elections. A good insurgent candidate might swing it away from Labour.

I think that there are quite a surprising number of ‘states’ where the result would actually be quite competitive – much more than in the US election where only one in five states are realistically in the balance. If applied to Wales, the outcome in the majority of ‘states’ would at least be interesting to speculate upon.

Here are the electoral votes, broken down by category of competitiveness:

So what would the result be? Well, I think it’s quite clear that bar an extremely bad night for them, Labour would probably win quite comfortably. After picking up the ‘states’ that are certain to go their way they would only need 116 more votes to win a majority of electors, and probably would only need a maximum of 81 given that Plaid and the Conservative would split the rest of the electors between them. The 134 ‘lean Labour’ electoral votes would be more than enough to get over the line.

Plaid Cymru meanwhile don’t really have a clear route to the Presidency – 182 would seem to be their maximum even on their best possible night. But if Labour and the Conservatives ended up on around 178 each, it would be mathematically possible that they could win it.

The Conservatives could pick up 236 electors on an excellent night for them – not enough for a majority but it would probably be enough to win even if Plaid Cymru only won their guaranteed seats.

It’s impossible to know how any new election would turn out, however. The PCC elections are a good example of this, when Plaid Cymru won both North Wales and Dyfed-Powys. Looking at other elections in those regions they shouldn’t really have been at the races but in a different constituency, with different electoral rules, they won.

Might some unexpected Labour voting areas swing behind a Plaid candidate if he or she was felt to be relevant on a national level?

But a Presidential system also tends to result in a two party system, so it’s also possible that many Plaid voters would tactically back the Labour or Conservative candidates to keep the other party from power, just as third party candidates have been squeezed out in the US.

Another unknown is what role would the smaller right-wing parties such as Brexit/Abolish/UKIP play? Might it be treated as a second-order election and an opportunity to give the established parties a bloody nose, as was previously the case at European elections?

In conclusion, the US electoral college is a pretty daft and undemocratic system that has no place in the 21st century. It frequently produces results that go against the will of the majority, and renders the votes of 4/5 of voters in non-swing states meaningless too. It should be abolished forthwith.

The system would actually be fairer if used in Wales because there isn’t as much of a gulf in the population of the principal areas or the same urban/rural divide as there is between the largest and smallest US states.

If Wales did ever directly elect a President, however, it should ideally choose an STV proportional vote system where people can list candidates in order of preference so that the vast majority of votes, across Wales, do count.

But whatever system is chosen for Wales would likely produce exactly the same result – which is a Labour First Minister.

But that’s down to the present political character of Wales rather than the voting system.