6 reasons why the Welsh language is superior to English 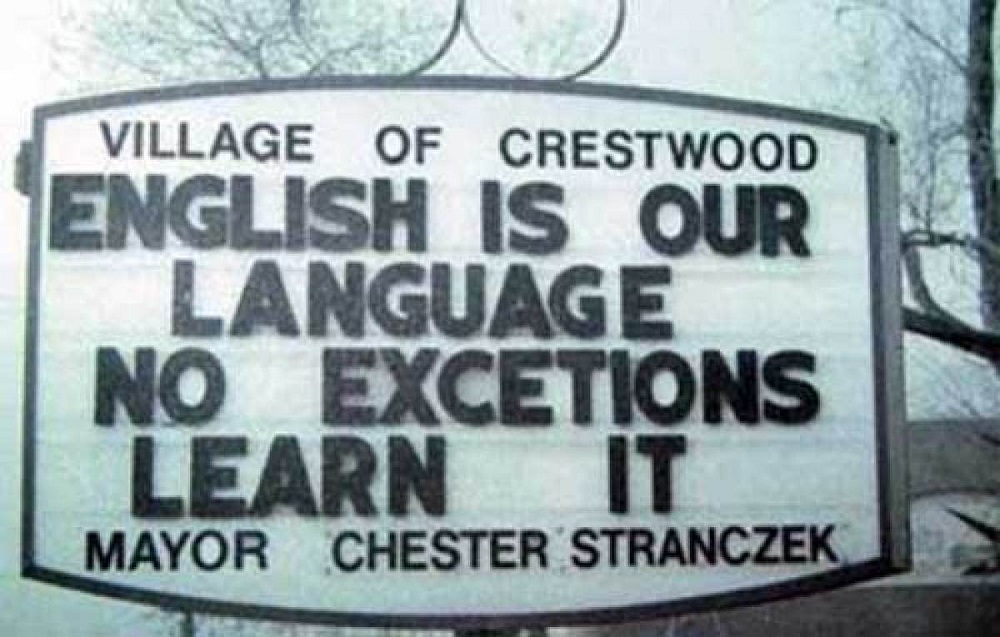 We hear a lot about why Welsh should move aside and allow English to take over. But why should it?

The Welsh language is vastly superior to English, as we will now demonstrate!

And, in fact, we think the English would be much better off cognitively, financially and intellectually if they cast off the yoke of their own dismal tongue and embraced the ancient Celtic language of Britain.

What kind of infernal gibberish is this? How on earth are you supposed to play Scrabble with only five vowels?

No wonder Carol Vorderman had to reach for so many consonants – it’s all English has!

Spelling in Welsh is entirely phonetic. You spell everything exactly as you say it. Easy.

The spelling system in English, however, is a total nightmare. So much so that most people who have spoken the language all their lives make sbeling mistaces all the tyme.

The ‘ou’ in sound, southern and soup are pronounced completely differently, but there’s an ‘oo’ in blue, shoe, flew, through, you, two, too, and gnu!

And what about the place names that are pronounced nothing like they’re spelt? Leominster? Worcester? Oswaldtwistle? Mytholmroyd? Herstmonceux? Cholmondeston? Ayscoughfee?

3.) The same words have different meanings

In Welsh, every word has one meaning. One. So when you use a word, people actually know what the hell you’re on about. This is how communication should work.

Not in English, though.

Light. Foil. Rose. Net. Bark. Nails. Mine. Squash. Current. Racket! Can you please tell me definitely what I’m referring to here? You can’t, can you?

English is full of these words with multiple meanings, for no good reason, and it makes no sense whatsoever.

Do you hate your children? Do you? If not, why confuse them, so?

4.) Bilingual signs are a danger to us all

For no apparent reason apart from to appease those too bone idle to learn how to pronounce things in Welsh, the country is full of bilingual place-name road signs.

Most of these are a complete waste of money because they at most change one or two letters in a place name. Merthyr Tudful becomes Merthyr Tydfil – why?

You know what comes next. Some poor sap will be driving up the M4 and will think ‘What’s the difference between a Merthyr Tudful and Merthyr Tydfil?’

Bam! In his confusion, he’s gone into the back of a Megabus.

5.) English, as you speak it now, is a dying language

As English spreads around the world as a second language, what we speak today will soon become a thing of the past.

It is already being de-standardised and is losing ground to American English in the world of computing and business.

The language is being fed by more and more linguistic tributaries and in the next 100 years is likely to change beyond recognition.

Future schoolchildren will look back at the language of today with the same lack of understanding as they currently look at the works of Chaucer.

It may be called English. But what you currently call English is, in fact, a dying language.

Welsh meanwhile will meander forwards much as it has the past few hundred years, with no real pressure to change its course to adapt to the needs of others.

Write a book in Welsh and a Welsh speaker will be able to pick it up and read it in 200 years with no real difficulty.

6.) Speaking English isn’t good for you

It’s estimated that over 95% of the population of Britain are monolingual English speakers.

This is unnatural. Most people in the world – 60 to 75% by some estimates – speak more than one language.

The brain evolved in a world before linguistic uniformity to be able to deal with different tongues, and speaking just one isn’t good for it.

Researchers have found that bilinguals have significant cognitive advantages in terms of memory, perception, and attentional and inhibitory control.

They have also found health benefits including faster stroke recovery and delayed onset of dementia.

Welsh is only useful in Wales – so you’re forced to learn other languages to communicate with the world.

But as an English monoglot, you can go to the other end of the earth and clever bilinguals will practice their English on you, and you’ll be worse off as a result.

The only conclusion is that the English language is a vast drawback to Britain and a manifold barrier to the progress of the people.

It is not easy to over-estimate its evil effect!

OK, you may have realised by now that this is, of course, a parody of the arguments used regularly against the Welsh language.

But there’s a serious point here. You can make silly arguments against any language. But they are all worthwhile and should all be cherished.

Perhaps we should just accept that and learn to love the richness and variety that comes with linguistic diversity.

Welsh and English are great, and we should maintain and nurture both of them.