The time will come when the people of Wales will make a choice about independence. To a large extent, that choice will be made on the basis of conjectures about the future economy.

YesCymru has started to prepare for these debates, exploring different aspects of economic development that are important to people’s lives. What could be achieved through independence that is unattainable otherwise?

At the first YesCymru debate at the Temple of Peace in Cardiff, on Saturday 16th November, I made a contribution to this endeavour. I proposed that an independent Wales could ditch GDP growth as the core principle of economic development.

There is no prospect of such a move on the part of the UK as a whole, but this is not as unrealistic as it seems. Wales has already taken a major step towards putting wellbeing considerations into law, through the Well-Being of Future Generations Act. New Zealand has just gone the whole hog and ditched GDP altogether. And, of course, the threat of climate change absolutely requires the abandonment of GDP growth at the earliest opportunity.

GDP is a lousy measure of economic progress. Simon Kuznets, who invented national income accounting in 1934, said to the US Senate, “The welfare of a nation can scarcely be inferred from a measurement of national income.” The most eloquent tirade ever made against the measure, by Robert F Kennedy in 1968, is well worth a listen.

At our level of development, more GDP per capita does not mean people feel better off. This graph mapping life satisfaction against GDP per capita illustrates how things level off once you get to where we currently are. 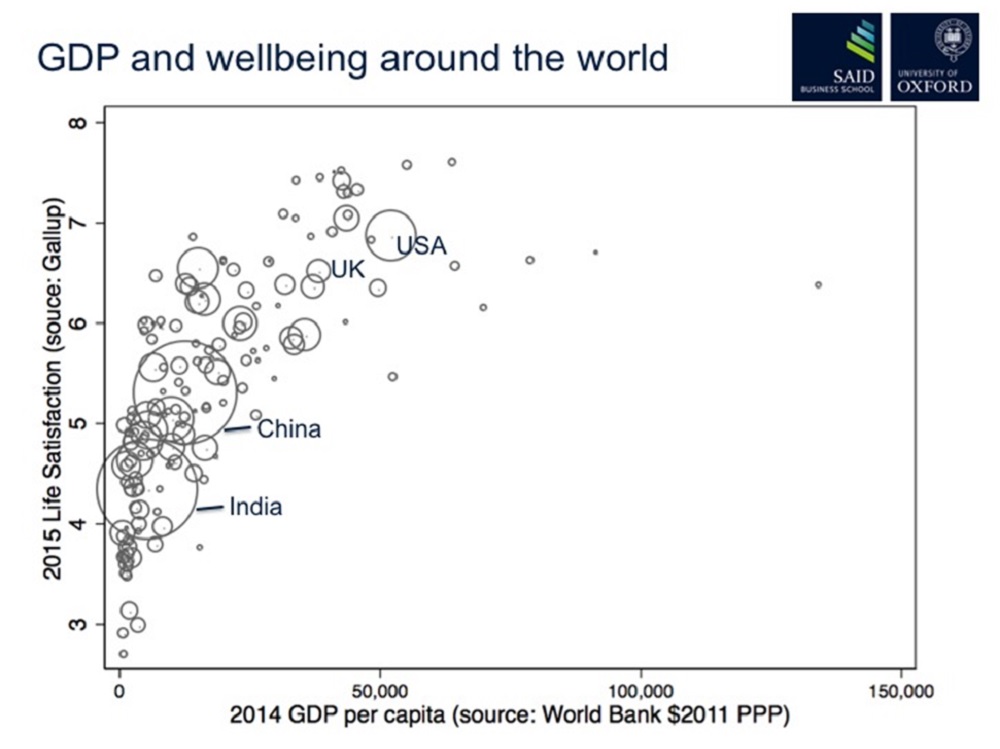 This matters politically, because right now, people are feeling miserable and this is generating political chaos. Increasing GDP is not going to help.

In the run-up to Brexit, whilst GDP was gradually going up, measures of life satisfaction were steadily going down. 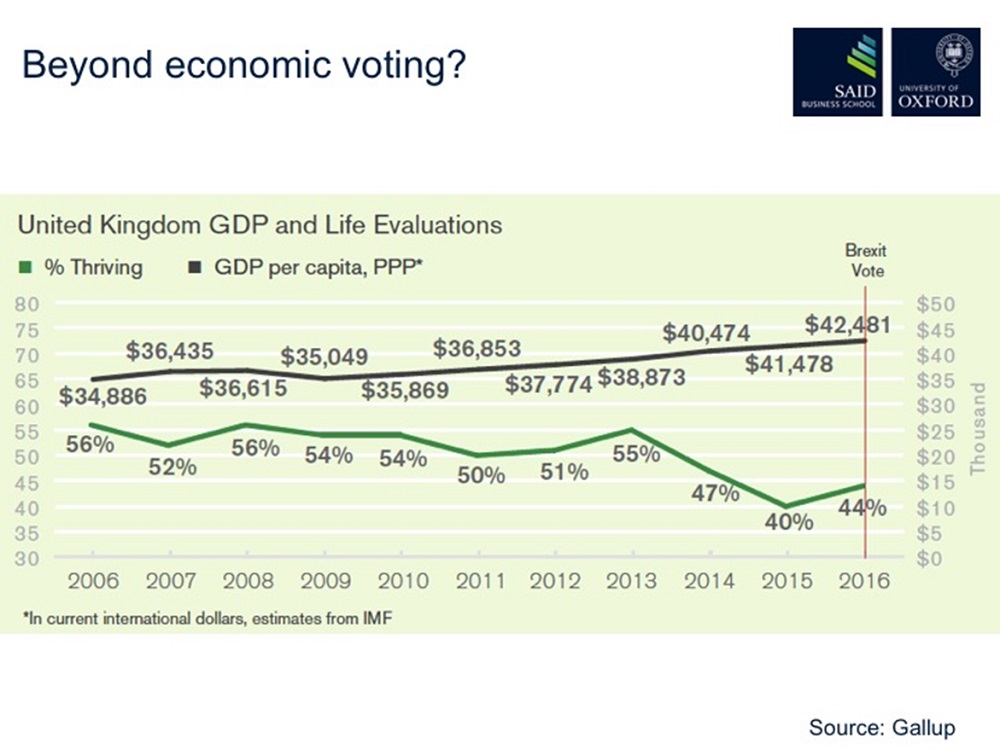 The same trends were seen before the Arab Spring and recent analysis of Trump voting shows it was greatest in those areas where people were least happy.

Economists have shown that, whilst GDP going up does not add much to happiness, GDP going down is dramatically linked to people feeling more miserable. This graph depicts the movements of GDP and life satisfaction in Greece through its recession. 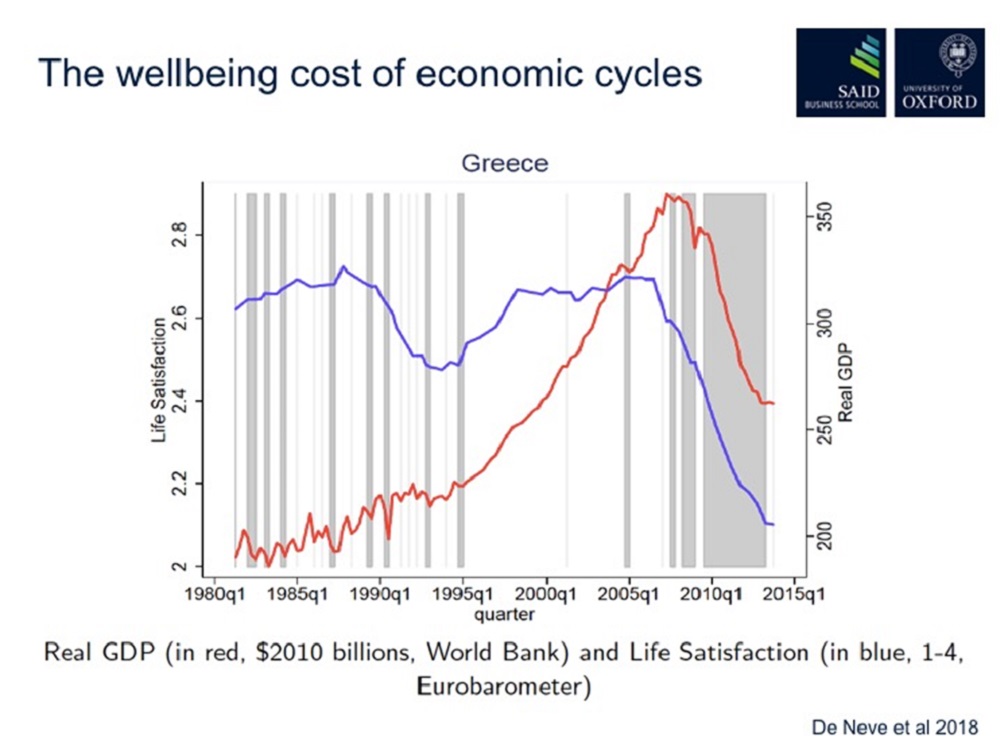 If misery drives political chaos, what of happiness? It turns out that, across Europe, when people are happier, incumbent Governments are more likely to get re-elected. This correlation is stronger than the GDP growth rate and also stronger than the unemployment and inflation rates. 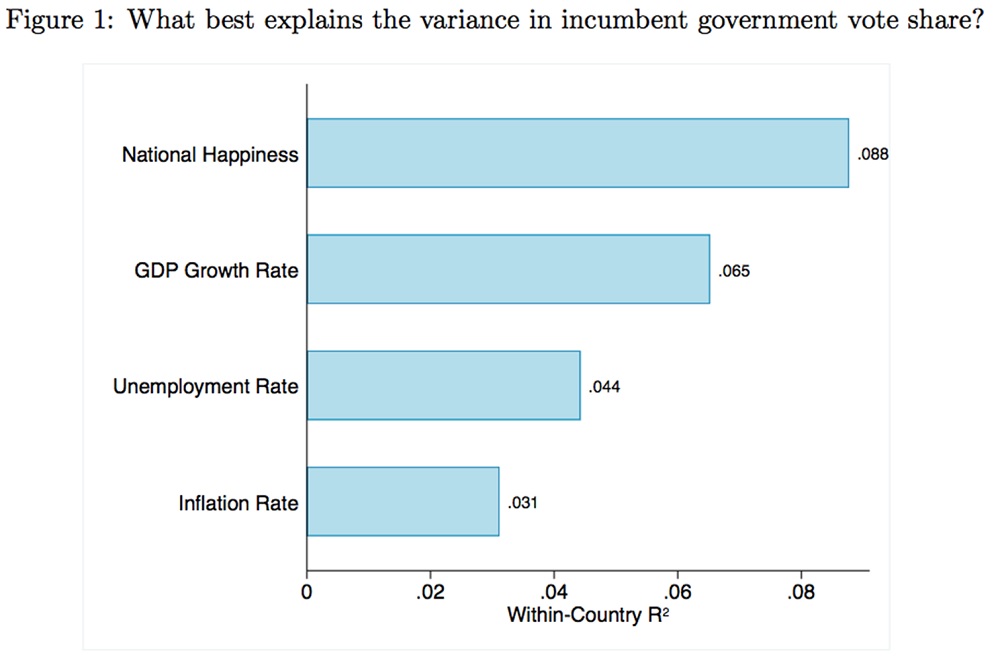 So I propose that an independent Wales could pursue happiness instead of GDP. This may sound a bit wacky in a society dominated by a capitalist ideology which emphasises economic growth above all else.

But this has all been worked out internationally in great detail. Since the 2008 global financial crisis, there have been some big steps forward. In Europe, the 2008 Report for European Commission by Joseph Stiglitz, Amartya Sen and Jean-Paul Fitoussi highlighted the urgent need to focus more on wellbeing.

The UN launched the World Happiness Report in 2011, and a year later in Bhutan the report,  Defining a New Economic Paradigm: The Report of the High-Level Meeting on Wellbeing and Happiness. In 2015 the global Sustainable Development Goals were agreed. In 2018, 238 academics call for a Sustainability and Wellbeing Pact, and the OECD published Beyond GDP: Measuring What Counts for Economic and Social Performance.

New Zealand has built on this system, adapting it to its own situation through substantial public consultation. This process added a 12th measure, cultural identity, on account of the urgent issues faced by the Maori and Pacific Islander communities. In addition, New Zealand added measures of ‘future capital’, which cover climate change.

In 2019, New Zealand published its first Wellbeing Budget 2019. It puts three new national priorities in top place: mental health, child wellbeing and Maori & Pacific Island communities. Then come the things one would expect in a budget, such as productivity, economy and investment. Finance laws are being changed so that annual budgeting is now organised around wellbeing outcomes – “actually what the public is asking for”, as Prime Minister Jacinda Ardern has put it.

Wales has the same kind of values as New Zealand and other small countries actively developing wellbeing economics, such as Scotland and Iceland, as evidenced by the fact that we already have the Well-Being of Future Generations Act.

Independence would give us the controls of the economy needed to follow the trail that New Zealand is blazing.

If people really believed that a new economy would improve what they really care about – jobs, health, social connections, safety and housing – then they would be more likely to vote for it.

I’ve some sympathy with these arguments and have said so during my many talks on the economy for YesCymru. Interestingly many measures of well being (however so defined) have noted a strong correlation with small countries.
GDP is a crude measure; however it remains – for all its weaknesses – the only indicator used by the majority of the world’s countries and is m whether we like it or not, a yardstick against which our future economic performance we will be judged.

I currently live in the “happiest country in the world”, Finland.
Small countries, or federal states, seem to have better results in achieving this.
So Wales does have a good chance here. Happiness? I prefer to ask Ydych chi’n fodlon?

So basically the sums don’t add up, so we all ignore reality and pretend?

The sums are never going to add up until we get full powers over our economy and until we stop getting ripped off over our water and electricity. Oh and attributingWelsh expenditure to English schemes such as High Speed Rail only serves to further distort the figures. The question I always ask myself is ;if we are such a financial burden on the Uk i.e England then why not release the shackles and be rid of us? Answer – they need us just as much (if not more) than we need them. A situation which cries out for a massively… Read more »

How much do you think the water is actually worth?

Probably quite a lot more than you’d think. Northern England is facing drought in coming years, and the South East of England has been short of water for the past half century. Also, there are more and more places in the world where, due to climate change, water is becoming a scarce commodity. So, inevitably water will become a valuable asset, the value of which will no doubt be decided by the market. Plus, let’s not forget that Labour controlled Liverpool built an entire reservoir, destroying a living, Welsh speaking community in the process, not because it needed the water.… Read more »

Replying to HB and DB. Yet again I refer you to articles published in Nation Cymru, Click on Wales and the Western
Mail addressing this issue – in a positive light! You are of course at liberty to disagree, but please look at the facts!
Incidentally, Severn Trent’s profit last year from selling water (free issue from us) was just short of a billion pounds – yes, a billion! England’s national debt currently stands at almost two trillion pounds – perhaps England is too poor to be independent……

With deeper analysis we might find that Wales and Scotland are the crutches propping up good old lame England ! Starting to look like that with all the snide comments about dependency but no ambition to ditch either country from the floppy Union.

Perhaps someone should head to Bhutan as they have been managing without obsessing about GDP for some time. Logic says that rather than swapping one measurement for another, we should be adopting a range of measurements aligning with whatever priorities are seen as most important and sustainable.

I’m very glad to see Bhutan mentioned as (I think) they started this idea The term “Gross National Happiness” was coined in 1972 during an interview by a British journalist for the Financial Times at Bombay airport when the then king of Bhutan, Jigme Singye Wangchuck, said “Gross National Happiness is more important than Gross National Product.” https://en.wikipedia.org/wiki/Gross_National_Happiness Wales can set its own measures to assess the happiness and well-being of its population. It could happen alongside GNP/GDP so that we have both measures. A tangent to this is the influence that a small country can have. The population of… Read more »

The reason governments focus on economic indices is because when these fall , so do they. If economic growth isn’t decoupled from environmental deprivations, then future generations are going to be very unhappy indeed!

Good point. Anyone looked at this?
Maybe seeking contentment, not fleeting happiness, which is a bad American idea, though at first we thought it “progressive”, like many bad ideas since.
But if people insist on Happiness, the “coming together” spirit can aid this?